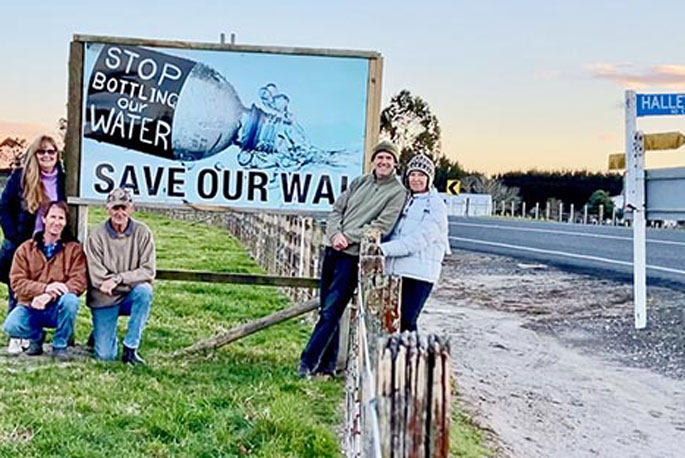 Sustainable Otakiri team members with the new sign they have erected on the corner of Hallett and Military roads. Photo supplied

Sustainable Otakiri chairwoman Maureen O’Kane says thanks to last minute donations, the organisation had been able to pay both the legal costs awarded to Creswell by the High Court, as well as a further $2799 Creswell incurred in filing the application for Sustainable Otakiri to be placed into liquidation.

The payments were made just days before the liquidation hearings that were due to be heard on August 14.

Sustainable Otakiri is one of four entities granted leave by the Court of Appeal to appeal Creswell’s resource consent to extract 1.1 billion cubic metres of water annually from the Otakiri aquifer.

The three iwi-based organisations are arguing points of law against both Creswell New Zealand and the Bay of Plenty Regional Council, with the emphasis on the amount of water taken from the aquifer. Sustainable Otakiri is the only entity arguing against Whakatane District Council.

During a High Court hearing in which the four groups tried unsuccessfully to overturn an earlier Environment Court ruling, the court awarded legal costs to Creswell.

A Creswell spokesman confirms the three iwi organisations have paid these costs.

However, due to a supporter being unable to provide the funding they had pledged last week, Sustainable Otakiri found itself more than $8000 short and was not able to pay on time.

Creswell New Zealand filed an application for the organisation to be placed into liquidation.

“Despite knowing they would have struggled to liquidate us during live court proceedings, they have tried time and again to get rid of us. It was always a David and Goliath battle against a corporation whose owner is worth close to $90 billion versus a bunch of everyday Kiwi volunteers but we're not scared of a bunch of corporate bullies.”

Ms O'Kane says the crux of Sustainable Otakiri’s case was whether Creswell’s activity on the site could be classified as a rural processing operation or an industrial operation.

In classing it as the former, they had been able to use a variation of consent from the small-scale existing water bottling facility to upscale it to a large-scale operation with limited public notification.

She says the description of the operation as a rural processing operation is misleading.

“This is a large-scale industrial operation they want to build. We haven’t been fighting for five years just for us. If it was just for us, we would have taken what they have offered and gone away. If we let this go ahead it will open up the pathway for other companies to do the same. It’s not just water bottling either. It is transferable to other types of operation. Backyard butchers could turn themselves into a plant the size of Affco without any public notification if variation of consents of this nature are allowed.

“I just don’t see any benefit to New Zealand to what they are doing. The few jobs they will provide aren’t worth it. We would have been better off, job-wise to have several smaller operations than one big automated plant.”

Meanwhile, Sustainable Otakiri has had a roadside sign created to aid with its publicity campaign. The sign is situated on Hallett and Millitary roads.

Sustainable Otakiri is contactable via its Facebook page Save Our Wai.

This is one business of thousands owned controlled overseas. The cutting rights to our timber exported direct to China from ever port. Real estate, farms, land, businesses all overseas. We have been selling the family silver for years. Often the names of companies are the same but are actually owned overseas.

Shame on the Regional Council allowing this! Shame on The Chinese Company and CHINA thinking they can take what they want! Shame on the so called law (if you have mega money you can do anything in any country) letting this happen! All of the Bay of Plenty need to get behind this and support what is ours! This story should be broadcast on national and international TV. Then all will be aware . . . Good quality water will very soon be worth more than gold . . . It is our lifeforce and we should keep it! Wake up people . . . see what China are doing around the pacific . . . They think they can manipulate anyone . . . Say no . . . its not all about the power of money!!!!