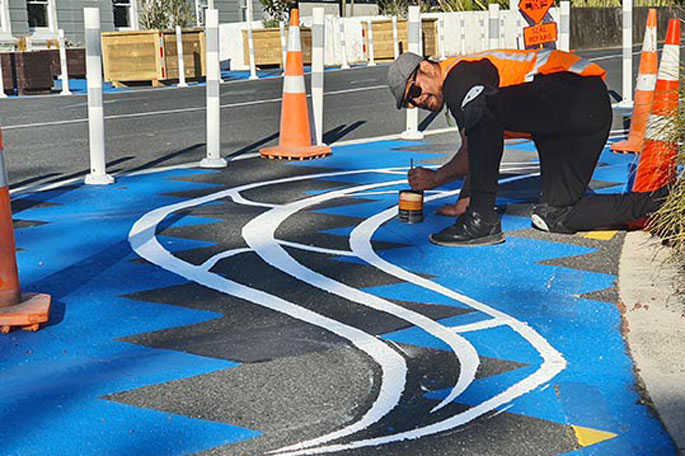 Sam Kora works on the feet of a large, white bird on the corner of the Strand and Wairere Street. Photo Diane McCarthy.

Local artist Sam Kora has chosen a Toroa (albatross) a bird named for the historic captain of the Mataatua waka, as the subject of his latest artwork in the series of road build-outs designed to slow driver speeds in the area around Wairaka.

Using funding from Waka Kotahi’s Innovating Streets programme, the buildouts also feature planter boxes, which are to be painted in designs by Mr Kora. This one is a three-part artwork spanning the intersection of Waiewe Street and The Strand.

The part of the graphic depicted on the corner where the old Beacon building used to stand depicts the feet of the bird, the beak and the eye are on the northern side of the intersection near the Bay of Plenty Regional Council building and the body is in the area covered by planter boxes in front of The Comm, between Toroa and Wairere streets.

While the white paint, outlined in black, depicts the Toroa, the blue geometric pattern underlying it depicts the Wairere Stream, the path of which, below the falls, now travels underneath the road.

“I wanted to depict that because that was the main life source to the Ngati Awa people when they first got here. That was the first fresh-water spring that they hit, which was kind of like a gift from the land. So I just wanted to replicate that in these sections. We miss our Wairere Stream, its hidden under all this concrete, so bringing it out in an image way I thought would be a nice way to complement that landmark, which is quite special. That was one of the landmarks that Toroa had to look for to make sure this was Aotearoa. Once he found that waterfall described to him by his father Ira-kewa, he knew he was in the right place.

“The theme of these graphics is about the land and the birds and all of our landmarks, which are slipping away a little bit, starting to get a little bit forgotten or not really respected or looked after. Plus they are all our tipuna, coming from a cultural perspective.

Mr Kora said he had another road painting going on the corner of Harvey Street and Wairaka road. That’s going to be painted on the footpath as well. But that’s more depicting, Ira-kewa, Muriwai and Wairaka; we’re going with a fish for them with the sea connection. So we’ve got the manu connection, the sea connection with the land.