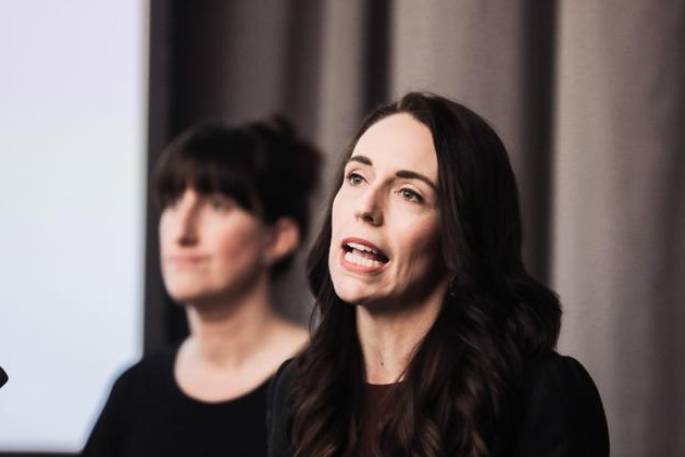 New Zealand will begin testing self-isolation instead of MIQ for vaccinated people this year, with a new border system based on low, medium and high-risk entry paths kicking in from early 2022, the government has announced.

Vaccinations will also be open to all eligible ages from September 1.

The gap between first and second doses will be moved to six weeks instead of three, as the government continues with its elimination strategy.

People should also expect the rules around mask-wearing and QR code scanning to change at higher alert levels.

The government has been responding to the Skegg report on reconnecting New Zealand with the rest of the world. The report is based on work by a group of public health specialists led by Professor Sir David Skegg, and warns that a full rollout of the vaccine would be required to start opening up to the world.

Prime Minister Jacinda Ardern says the government would use the second half of this year to vaccinate as many people as possible, and trialling having people isolate at home - instead of in managed isolation facilities - if they have been vaccinated.

"The impact of border closures has been tough. Very tough. It has impacted on loved ones - family and friends being separated, industries accessing skilled employment, or Kiwis just missing that personal sense of connection," she says.

"A careful approach that says 'there won't be zero cases, but when there is one in the community, we crush it" is the best way to maintain our normal lives while we monitor the twists and turns of Covid-19 over the next six months."

"Key to this is maintaining our Elimination Strategy. The advice is clear: If we open our borders now we will lose the freedoms and advantages we have achieved so far," she says.

The system would also require pre-departure tests and further testing for travellers coming into New Zealand, and would be backed by moves to speed up the vaccination rollout.

"Which pathway a traveller takes will be based on the risk associated with where they are coming from and their vaccination status," says Ardern. 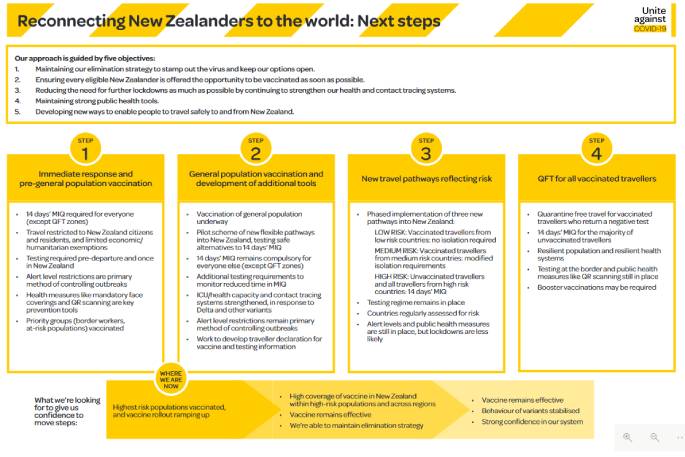 Part of the rollout included a move to focus more on first doses than ensuring full vaccination, and an extended period of six weeks between first and second doses.

"The first step in our plan is speeding up the vaccination process to ensure everyone is at least partially vaccinated as soon as possible to reduce the risk and impact of Delta entering the country," says Ardern.

Eligibility would also open to all age groups earlier than had been planned.

The four-step plan has the current situation as the first step, with an immediate response and targeted vaccinations, moving to a second stage of vaccinating the wider population and trialling the self-isolation scheme and other measures.

The third stage would include introducing the individual risk-based border, with lockdowns less likely, and the fourth would see vaccinated travellers eligible for quarantine-free travel after returning a negative test.

"Since the pandemic began, one in 1675 New Zealanders have had a confirmed case of Covid compared to one in nine in the US or Sweden, and we have had two-thirds fewer cases than Australia per capita," says Ardern.

"If New Zealand had been hit as hard as the UK or US, nearly 10,000 Kiwis would have died - that's the population of Te Puke - and we were able to achieve this while having the least stringent restrictions in the OECD, resulting in unemployment recently falling to pre-Covid levels at four per cent and growth that has outperformed the likes of Australia, the United States, Canada, Japan and the United Kingdom."

...of putting "High Risk" people into MIQ, why not eliminate that category altogether? If you’re not vaccinated you can’t come in. (Personally, I’d make it that you can’t leave either; no travel without vaccination. It’s not rocket science...)

This government is slowly banging it’s head against a brickwall with Delta written on it.

You've got to be joking!

I, 100% agree with ’The Professor’, and this seems crazy since we’ve been reading in the news we’ll have the Delta variant this year!

Obviously the select group who will get to test the quarantine free entry will be sportspeople and wealthy VIPs. Champagne Socialism at its finest.

Only the matter of time now.

This is a sure way to infect the country. Sounds like the Government have given up!! Either that, or they don’t understand the concept of the COVID jab. COVID jabs do not stop people catching COVID-19 and they certainly don’t stop infected people from spreading it. They are very naive if they think incomers are going to self-isolate!!!