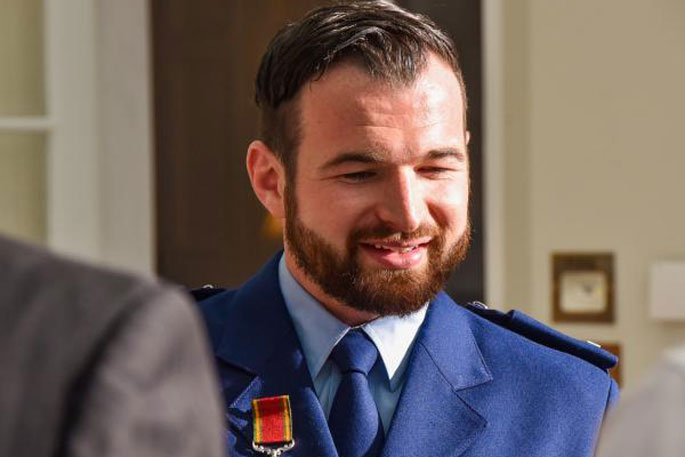 A Waikato police officer whose calm and decisive actions saved the life of a man being engulfed with flames has been awarded the Royal Humane Society of New Zealand silver medal.

Constable Scott Higby was presented with the award, recognising those who put their own lives at risk to assist others in peril, at Government House in Wellington on Tuesday, surrounded by his family.

It was about 2pm on 31 July, 2020, when the 28-year-old and another constable were one of the first units at the scene of a highly volatile family harm incident at an inner city suburb in Hamilton.

A man had assaulted a woman and was threatening to set fire to a house using a can of petrol.

The officers' plan was to get the woman out of harm’s way and then deal with the offender.

“We got there and he was chasing her around on the driveway with a petrol can in his hand," says Scott. "She was screaming for help and he was telling her to get inside.”

The constables’ intervention allowed the woman to run to safety. Scott informed the man he was under arrest but he ran into the home still clutching the can.

After checking whether anyone else was inside, Scott entered the home in attempts to quell the situation.

“I saw he was splashing petrol around the entrance and kitchen area. He produced a lighter and was looking at me trying to spark it.”

In doing so, the man set himself alight. Flames began to swirl.

“I was looking at the fire – it slowly crept through the fuel and began spreading towards me."

Scott dashed out, yelling to his colleague to get a fire extinguisher.

Realising the man had fallen in front of another external door in the hallway, Scott quickly went around the back of the property hoping there would be room to pull him out.

He could see the man lying behind the door.

Pulling on his previous experience attending house fires, he smashed the top window of the panelled-glass exterior door from behind a wall to avoid any backdraft before clearing out the other two glass panes.

“I was yelling out to him and he was lying there lifeless,” he says.

As Scott smashed the window, the man came to, got up and opened the door before falling to the ground, still partly on fire.

“We rolled him on the ground and dragged him out to the road and covered him in water."

The man suffered serious burns to his body and was taken to hospital in a critical condition but subsequently recovered. The house was destroyed in the blaze.

“I thought he was going to die," says Scott. 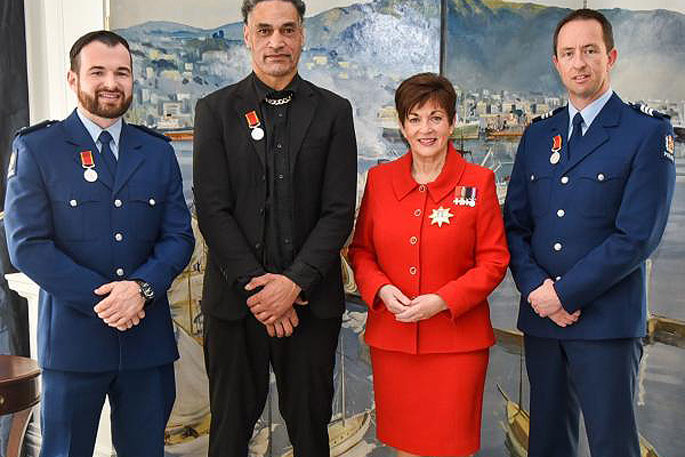 Recognising his actions, the Royal Humane Society said in it’s award: "Faced with a highly volatile and dangerous situation, Constable Higby took calm and decisive action: first to try and diffuse the situation, and then to rescue the man from the burning house and provide first aid.

"These brave actions were instrumental in saving his life."

But Scott says it’s part of the unpredictable job of being a police officer – you never know what you will encounter.

“The first thing you think of when you go to these high level incidents is how to calm the situation. The objective is to get her away and then take things from there. Try to communicate with him.

“You come up with a plan and try to stick to it, but things change and you just need to stay fluid.”