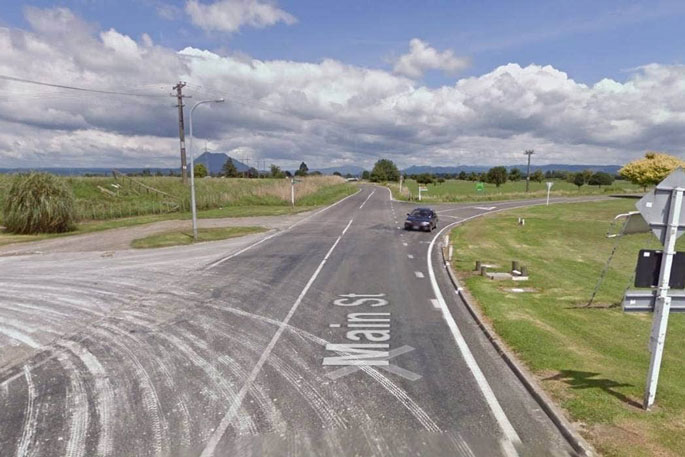 The corner of Main St and Otakiri Rd in Edgecumbe where a drink-driving officer crashed a police vehicle. Image: Google Maps.

Four police officers have been disciplined for drinking or being drunk at work in the past 10 years.

Out of those four, one was formally charged while the other three were removed from work duties.

One of these was Bay of Plenty police officer who crashed a patrol car through a fence while nearly five times the alcohol limit after buying beers at the start of his shift.

The officer admitted two driving offences in the Whakatāne District Court following an incident in Edgecumbe in April, Bay of Plenty District Commander Superintendent Andy McGregor said at the time.

The charges follow a single-vehicle crash involving a police vehicle at the corner of Otakiri Road and Main Street, Edgecumbe, at 8.30pm on April 6.

The officer pleaded guilty to one count of careless driving, and one count of driving with excess breath alcohol.

He was convicted and sentenced to six months’ disqualification, a $1000 fine and $2013 in reparation.

The on-duty officer was the sole occupant of the police vehicle, and was not injured in the crash.

While the 38-year-old is the only officer to be drunk and actively working in the past 10 years, he isn’t the only one to be disciplined through police for being drunk at work.

Information released to Stuff showed three other police officers were disciplined for being drunk at work.

Police say the three incidents involved people turning up to work drunk, and they were removed from work duties.

“Welfare has been initiated and then disciplinary processes were followed.”

A police spokeswoman says there was a range of actions that could be applied on the very rare occasions an employee was found drinking or drunk at work.

“The path chosen depends on the particular circumstances and context.

“Options could range from a health-based approach, to employment warnings, to dismissal – the action taken is entirely dependent on the particular circumstances.”

The police drug and alcohol testing policy takes a rehabilitative approach, whereby staff identifying as having a drug or alcohol issue will be referred and supported through specific programmes, she says.

“Wellness Support and Chaplaincy services are further avenues of support for staff with drug and alcohol related dependencies.”

... the size of the Police Force and the time period of 10 years, this seems to be a very commendable result. I see no cause for these statistics to lower our confidence in the cops.