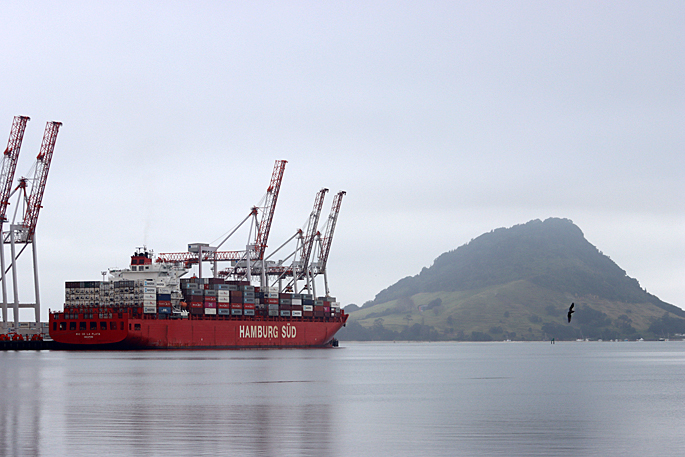 The Port of Tauranga says the Rio de la Plata is now on its way to Malaysia. Photo: Alisha Evans/SunLive.

A second round of testing for Port of Tauranga workers has resulted in no positive Covid-19 test results for port workers.

The news comes as the Rio de la Plata, the shipping container on which 11 crew members have tested positive, left New Zealand for Malaysia, with infected crew still on board.

A Port of Tauranga spokesperson says the Singapore-flagged vessel has left anchorage at Tauranga and is on route to Tenjung Pelepas port in Malaysia.

They also confirm that no positive tests results have been found in the latest round of port worker testing.

“A second round of testing was undertaken at the port yesterday afternoon,” says the Port spokesperson.

“We’ve been told that all results are negative.”

The Ministry of Health has now confirmed that is the case.

“A total of 72 port workers that have been identified as contacts; 70 were identified as requiring a Day Three test after their potential exposure; 64 of these have returned a negative test and six are pending,” says a MOH statement.

“In addition two pilots, who have also both tested negative, remain in isolation for 14 days since their possible exposure.”

The Rio de la Plata’s next intended destination was Napier. It was Covid testing necessary before the ship disembarked for Napier which resulted in the 11 positive cases coming to light.

A Napier Port spokesperson has told RNZ that the ship would not be allowed to berth there until crew all returned negative tests.

Therefore, the ship is heading to Malaysia, where it’s expected to arrive on August 22.

RNZ report the company that operates the ship, Maersk, say the ship has received clearance from New Zealand health and port authorities.

Crew members have each been evaluated by the captain and a company doctor. All are in good health, with none being symptomatic.

The company says members with positive test results are all past the acute phase of Covid-19 infection and will be kept isolated.

The ship was piloted by an Australian man last month who later tested positive for Covid-19. That revelation briefly saw a pause to operations on the ship on Wednesday before it was later cleared.

Testing then took place on Saturday morning, from where the positive cases on board the ship came to light.

The MOH says it is now reviewing the incident response over the next few days and will be providing an initial update to the Minister of Covid-19 response Chris Hipkins early next week.

Toi Te Ora Public Health confirmed yesterday that 72 port workers boarded the vessel while it was docked in Tauranga for four days. All 72 have returned negative Covid-19 test results yesterday.

A total of 110 tests were carried out yesterday as a result of the outbreak onboard the Rio de la Plata, and all returned negative results.

Public health staff have assessed that the risk posed to the Tauranga community by the Rio De La Plata Covid-19 cases is low, says a MOH statement. For this reason, there are currently no restrictions on events in Tauranga.

“The Ministry is asking port workers, their close contacts and Tauranga community to remain vigilant for Covid-19 like illness and follow all health advice. “

So, can we infer that PPE was effective?

(At least on this occasion...) I still think we were lucky. And what about the guys on the boat? How do they ever get treated? It’s like the ONLY consideration is the cargo... And the fact that we had a lucky escape does not excuse the "shambolic" management that was exhibited.

It’s ok, another one is on it’s way. Prof Skegg says Covid elimination in NZ may be no longer possible! You don’t say. The reality is that once vaccines are available to all, it is no longer necessary. NZ needs to get off this stupid strategy ASAP.