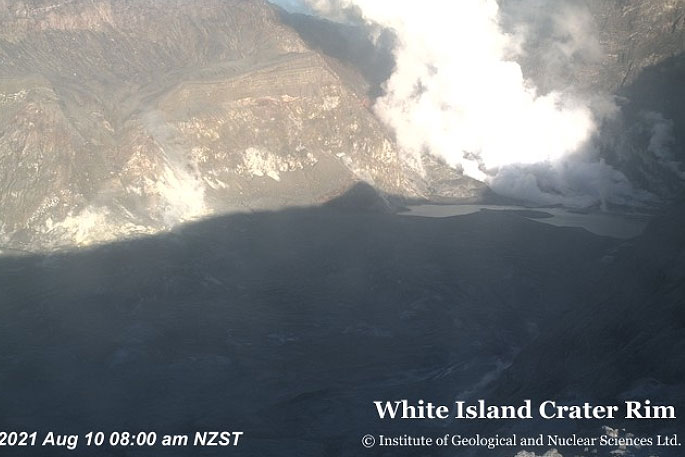 GeoNet is reporting that the Volcanic Alert Level remains at 2, which indicates moderate levels of unrest.

"These measurements and observations show that the maximum active vent temperatures remain high at around 520°C. We continue to observe night glow in webcam images.

"Moderate levels of Carbon dioxide (CO2) and Sulphur dioxide (SO2) gas were measured in the air downwind of the volcano, similar to those measured on July 20."

He says the combined interpretation of this information consolidates evidence for a fresh magma intrusion to shallow levels since June 2021.

"Due to the very steamy conditions at the vent we don’t have any visual observations of fresh lava at the surface.

"However, our monitoring indicators suggest magma is likely present at very shallow levels."

Craig says the current level of activity is consistent with moderate levels of unrest. As such the Volcano Alert Level remains at 2 and the Aviation Colour Code remains at Yellow.

"Equipment that provides real-time monitoring on the island is currently degraded and we are continuing to work on restoration options.

"Our current monitoring consists of two on-island webcams and one from Whakatane.

"These cameras provide images every 10 minutes. Realtime seismic monitoring of the island is currently degraded and only provides intermittent data from one out of two stations.

The Volcanic Alert Level reflects the current level of volcanic unrest or activity and is not a forecast of future activity, says Craig.

While Volcanic Alert Level 2 is mostly associated with volcanic unrest hazards (including discharge of steam and hot volcanic gases, earthquakes, landslides and hydrothermal activity), potential for eruption hazards also exists and eruptions can still occur with little or no warning.