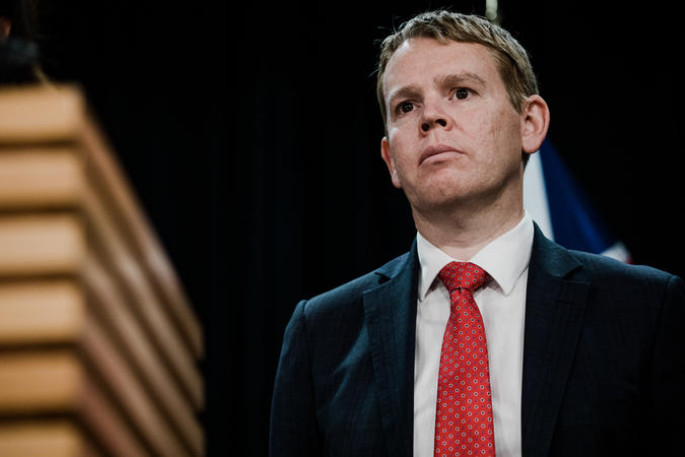 As of July, 22, 60 per cent of the frontline border workers in the Bay of Plenty haven’t had a single Covid vaccination.

The news comes amid 11 cases of Covid-19 on a shipping container that was recently berthed in Tauranga.

The Rio De La Plata, currently at sea off the coast of Tauranga, was boarded by an Australian pilot in July who subsequently tested positive for Covid-19.

A further 94 port workers have since been identified as having contact with the ship during the four-day period it was berthed at the Port of Tauranga.

Speaking at a post-Cabinet media appearance today Covid-19 Response Minister Chris Hipkins confirms that of the 94 port workers impacted only nine had been fully vaccinated two have had their first dose.

“Those numbers are too low,” he says.

According to a response from Hipkins to a written question from his National Party counterpart Chris Bishop, as of July 22, of the 530 frontline border workers in the Bay of Plenty, 319 had not had a single jab.

“This is incredibly concerning,” says Bishop.

“Frontline workers were meant to have been vaccinated months ago. We have a glaring hole in our border.

“Bay of Plenty with our largest port workforce is the worse with 60 per cent of their workers unvaccinated, that’s higher than the average for all port workers, which is still shockingly at 40 per cent unvaccinated.

“The port is one way Covid-19 could enter New Zealand. Given the huge number of unvaccinated port workers in the Bay of Plenty, and the fact active cases were on board at the time, it’s not unfeasible that transmission could’ve taken place, putting the rest of New Zealand at risk.

“The Government has left a major vulnerability in our Covid-19 response. It has taken way too long to mandate that staff working at the border in a frontline should be vaccinated.”

ACT leader David Seymour has been equally critical of the figures saying New Zealand’s luck was soon going to run out if changes were not made.

“With the very real risk of another Covid-19 outbreak, our borders have been left vulnerable with more than 1,000 port workers unvaccinated,” says Seymour.

“As of two and a half weeks ago, there were 1,149 unvaccinated port workers. You only have to look at what’s happened today with the ship Rio De La Plata off the coast of Tauranga today to see how vulnerable this leaves New Zealand.

“The largest number of unvaccinated workers is in Bay of Plenty, the very place the workers have potentially been exposed.

“New Zealand has so far got by with good luck, not good management, The Government needs to lift its game before our luck runs out.”

Asked about the risks posed by the Rio De La Plata container ship off Tauranga, Ardern says the government has always prioritised frontline workers, including port workers, for vaccination.

"They have had vaccines available for some time," she says.

She says a situation where border workers were not vaccinated is not tolerable, however, which is why the government has mandated that workers at the border must have their first dose by August 26.

Ardern also lays the blame of poor vaccination uptake in port workers at the door of misinformation.

"What we have encountered though are a range of barriers to those individuals having a vaccination and that includes, unfortunately, misinformation..."

Hipkins backed up that claim. He says that port workers are among the New Zealanders who have had access to Covid-19 vaccinations for the longest period of time.

He states that from meetings with relevant employers, unions and organisations it is clear the spread of misinformation is a major cause for the low vaccination rates among port workers, including in the Bay of Plenty.

“I have spoken about this before,” says Hipkins.

“The low rates of vaccination amongst our port workers they by far fall into the lowest vaccination category of any of our frontline border workers. It has been an area of concern for me for some time.

SunLive has contacted the Port of Tauranga and Ministry of Health for comment.

There won’t be Civil Disobedience and it would only make a bad situation worse, anyway. While most of us share your disgust, we need to kick the arses of the people responsible and get a result. Ultimately, the responsibility is with the Minister of Health who presents himself as being capable and knowing what’s going on. This shows that he obviously isn’t and doesn’t and his arse should be no more immune than anybody else’s. And the PM should apologize to the population too (in particular the people of Tauranga). It’s her bloody Government.

Bull****? Nah Mate, there’re no stars in this; it is just plain bullshit. (Colloquial Kiwi like "bugger"... which is also applicable here...) I couldn’t believe this when I read it and although I try to be moderate and generally Liberal, this is a case where somebody should be held to account and maybe lose their job. We can’t MAKE people (even front line staff) get vaccinated but we CAN make sure that all such staff are properly well informed and if the takeup is low, then it should be made a condition of employment. Even if it isn’t in existing work contracts, there has to be provision for changes to contract terms under unusual circumstances. A global pandemic is unusual. It is pointless for the PM to state that vaccines were available, if they remained unused. Why wasn’t there a follow-up to make sure that effective vaccination was underway?

For the safety of the community these border workers should be vaccinated or no job...........no choice and a no-brainer.

Just proves that it’s no longer IF the Delta variant enters New Zealand, but WHEN it will get here and how prepared we are for it. Maybe the unions on the port need to stop looking for someone else to blame and start accepting that jobs require a level of personal responsibility and accepting that rules need to be set and enforced.

The "we are on top of it" as he has been saying for MONTHS But-----Chris Hipkins confirms that of the 94 port workers impacted only nine had been fully vaccinated two have had their first dose. What are they on top of - NOTHING !! Sorry but ALL port workers should have been vaccinated at last 6-9 months ago as FRONT LINE WORKERS. So we now have 80 odd port workers who have been mixing with the crew of a ship the the HEALTH MOB said last week was safe!!! The 80 odd have been home (family/flats etc) and those family/flatmates have been out in the community !!! HAVE TO SAY GOOD LUCK - TAURANGA. Hear you go towards NSW Aussie !!!

How long before civil disobedience takes over and the port gets blocked? What is the POT doing to safeguard the community it relies on for significant support? The port is a major reason for Tauranga’s growth but it risks alienating the hand that feeds.

All the hype and priority given to front line workers at the borders . Hang their heads in shame. They shouldn’t be working in an area of exposure. Government and employers are responsible and workers should be given an ultimatum , work or stand down

Here we go again. We’ve been here months ago, in April, when they told us that all border workers would be done. What a load of bull****. It just confirms what I’ve always believed - it can’t be that dangerous or they would have made sure border workers were done. It’s all smoke and mirrors and lie upon lie.