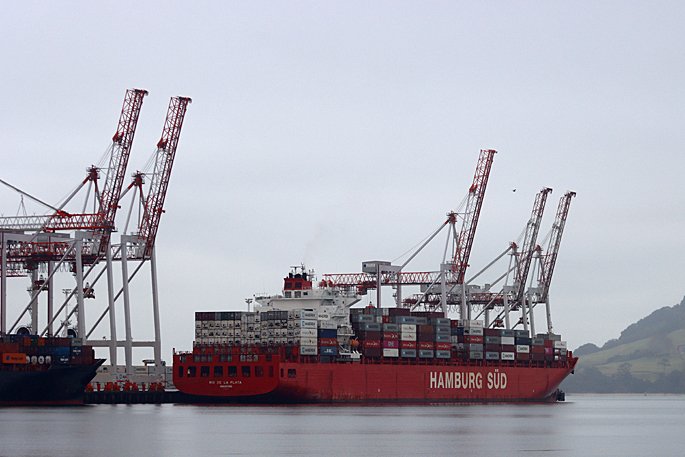 The ship was berthed at the Port of Tauranga on August 4. Photo: Alisha Evans.

Testing at Port of Tauranga is under way for workers who had contact with the container ship Rio De La Plata, now identified as having a number of Covid-19 positive crew onboard.

Testing of the crew of the container ship, currently at sea off the coast of Tauranga, has returned positive results for 11 of the 21 crew on board, with one test result currently  indeterminate, says a statement from the Ministry of Health.

The crew have been informed of the positive Covid-19 test results and, as of Monday morning, crew members on board are reported to be well.

“Officials have worked with employers to identify 94 port workers who had contact with the ship, unloading cargo in shifts over the four-day period it was berthed at Port of Tauranga from 6pm on Wednesday, August 4, to 2pm on Saturday, August 7,” says a spokesperson for the Ministry of Health.

“All have been contacted, told to isolate awaiting a negative Covid-19 test result, and are being tested for Covid-19 today.”

“Some workers will require a second test, based on their contact with the ship, and will be required to remain in isolation until the result of those second tests are known,” says the MOH.

“The Ministry understands from local public health staff that all infection prevention controls, and PPE protocol, were followed by port workers who had contact with the ship during their duties.”

Meanwhile, the Minstry of Health says there are no cases of Covid-19 to report in the community today.

"There are two new cases of Covid-19 to report in recent returnees in managed isolation facilities, since the Ministry’s last update yesterday," says an MOH spokesperson.

"There are two additional historical cases of Covid-19 to report in MIQ today."

Ten previously reported cases have now recovered, with the number of active cases in New Zealand at 36.

The total number of confirmed cases is 2534.

The Mattina remains in quarantine at a secure berth in Bluff.

As of Monday morning, 13 of the original 21 mariners remain on board the vessel, says the MOH.

On Saturday, five mariners were released after 14 days in managed isolation. These mariners have consistently returned negative Covid-19 test results.

"One mariner, who was transferred off the boat at a later date, remains in a managed isolation facility in Christchurch.

"Two further mariners, who both required hospital care, have been discharged, and are in Southern DHB-arranged accommodation where their health can continue to be monitored and treated. The Ministry understands from Southern DHB that the mariners are recovering well.

"Every possible public health precaution is being taken to care for the mariners in a way that provides the health care they need, and keeps health workers, port workers and the community safe."

"We are continuing to remind anyone who returned from Queensland on return flights last week to keep checking locations Queensland Health website  and monitor for any symptoms of Covid-19," says the MOH.

"If people have been at a location of interest at the relevant time, they should immediately isolate at home or appropriate accommodation and call Healthline on 0800 358 5453 for advice on testing."

New locations of interest have also been added for Victoria and Western Australia.

Contact tracing staff have also identified 2,995 people who returned on managed flights from Victoria between July 25 and 30 and have been required under a section 70 notice to isolate until a negative day 3 test.

"Of those, 2848 have so far returned a negative test; six have returned overseas and don’t need to be followed up; and 91 have been granted a clinical exemption.

"Public health officials consider those remaining people, who have not yet provided a negative Covid-19 test, as low risk to the New Zealand community and, therefore, no further action is deemed necessary at this stage."

The seven-day rolling average is 5445.

The pass the parcel starts

with Maritime NZ clearing the ship for pilot boarding here when they knew the ship was compromised when boarded two weeks ago by an Australian pilot, who had tested positive. “Government agencies have clarified the situation and the Public Health Unit has advised us that operations can resume on the vessel and there is no need for workers to isolate.”