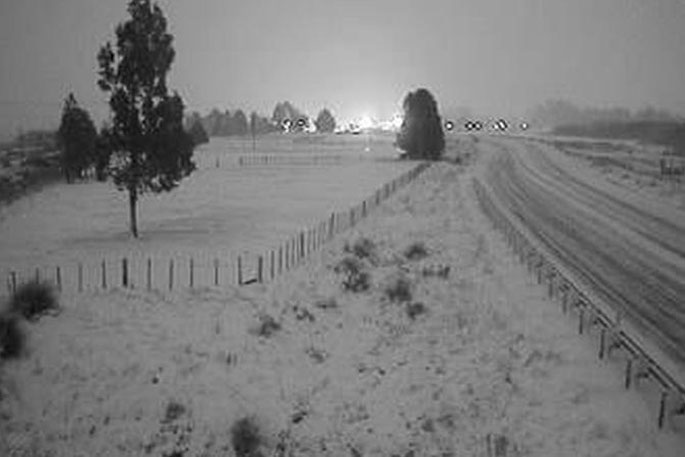 State Highway 1 looking north towards Waiouru at the start of the Desert Road this morning. Photo: NZTA

In the North Island, snow has closed the Desert Road on SH1, and SH4 through National Park.

Falls have eased eased in most parts of the south, though Arthur's Pass, Porters Pass, Lewis Pass remain closed.

A snow warning is in place for eastern parts of the country including Canterbury, Wellington and Hawke's Bay.

A wind warning is also in place with gales affecting flights and ferry crossings in Wellington.

Ferry crossings are cancelled this morning and passengers flying in or out of Wellington should check the airport's website.

Gale southerlies and snow showers to 200-300m in southern and eastern areas of the North Island would gradually ease later today, MetService says.

MetService meteorologist Bill Singh says some parts of Southland and eastern areas north of Rakaia would get light snow showers this morning.

A number of road snowfall warnings across the country have been issued by MetService.

In the South Island these are the Dunedin to Waitati Highway, Milford Road, Crown Range Road as well as the Lewis, Porters and Arthur's Pass which are currently closed due to snow.

In the North Island warnings have been issued for the Napier-Taupo and Remutaka Hill Road, and the Desert Road which is already closed.