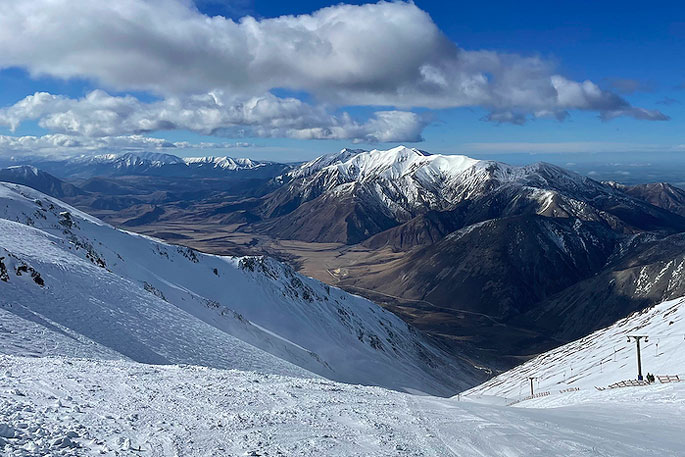 View from Porters Alpine Resort yesterday pre-storm, however this view will look very different when the skies clear early next week. PHOTO/TOM HARRIS

High avalanche warnings have been issued by the NZ Mountain Safety Council as heavy snowfall reaches low levels across the South Island.

MetService has issued multiple snowfall warnings as the largest snowfall event of the winter looks set to produce significant amounts of new snow for many eastern alpine regions in the South Island and for the central North Island as the system moves northward.

Snow has fallen to low levels in Canterbury throughout Sunday, accumulating in towns such as Methven, Hanmer Springs and St Arnaud.

As a result, the New Zealand Avalanche Advisory (owned and operated by MSC) Avalanche Danger ratings have risen to ‘High’ for Aoraki/Mt Cook, Two Thumbs, Craigieburns, Nelson Lakes and Tongariro.

"The first fine, clear day following this system is likely to produce numerous loose wet avalanches as the snow warms up from being exposed to the sun,” says Daisley.

“The 24-48hr period after a storm like this one is the most dangerous and while the temptation is to rush out and get the fresh powder it’s really the time for patience and a cautious approach,” Daisley adds.

MSC is warning that even lower elevations will have issues with warmer temperatures and snow being able to slide on slippery surfaces like tussock.

As a result of this storm and the conditions, MSC encourages people to stay in bounds at a ski area for the first fine weather day once things clear.

This will allow the snowpack to settle and give avalanche forecasters time to accumulate more data so they can produce new forecasts that incorporate a better picture of what’s going on in the backcountry.

“It’s vital that people check the latest avalanche advisory before venturing out and follow the guidance provided.”

While this change in danger ratings is not unusual for this time of year, it is a very different story to the calm August last year which saw very low levels of snowfall.

Once the snowpack has settled and it’s safer to venture out, MSC asks that users share what they see in the backcountry by submitting observations at avalanche.net.nz.