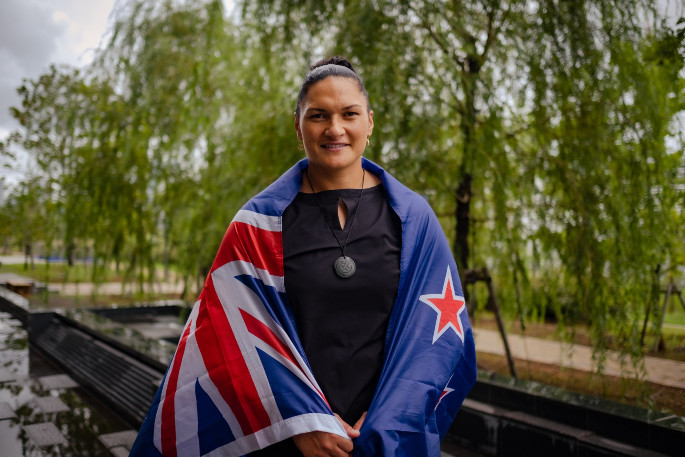 New Zealand's flagbearer for the Tokyo 2020 Closing Ceremony has been revealed this morning. Photo: The NZ Olympic Team.

“It’s an incredible honour to be named as the New Zealand flag bearer for tonight’s Closing Ceremony,” says Dame Valerie.

“To represent our team and Aotearoa tonight as we close these Games together means a lot to me and my family. One day when my children Kimoana and Kepaleli understand what their Mum does I hope they will be just as proud of this significant moment too.”

The flagbearer is chosen by the New Zealand Olympic Team Chef de Mission taking into account a wide range of factors including past performances, ability to lead and inspire New Zealand athletes, competition preparation and performance standards.

Other factors for deciding on the flagbearer include that they haven't been flag bearer before, they embody the values and manaaki of the New Zealand Team, and have represented New Zealand with pride at multiple Olympic Games.

“It’s fair to say Tokyo 2020 will go down in history, the success of these Games is an absolute testament to the people of Japan who enabled us to safely come together and inspire and unite the world. Arigatō gozaimasu,” says Dame Valerie.

“We asked Dame Valerie to carry the New Zealand flag and lead our team at the Closing Ceremony as she perfectly represents the values and culture of the New Zealand Team,” says Rob.

“Dame Valerie is an incredible athlete who has represented New Zealand to an extremely high standard for around 20 years.

“She’s a fantastic leader of this team and I’m looking forward to watching her carry our flag for the first time at the Olympic Games.”

Dame Valerie will follow in the footsteps of other Closing Ceremony flagbearers including Lisa Carrington in Rio, Mahé Drysdale in London,  and Caroline and Georgina Evers Swindell in Beijing.

I was one of the (to quote you) do gooder namby pamby wowsers who wanted it cancelled (thank you, you’re welcome) because I believed the risk was too high. I still believe it was a big risk but I thoroughly enjoyed watching the games and am glad they were able to go ahead. I think it’s a great personal close for Adam’s to be flag bearer. Carrington will undoubtedly have more opportunities to ’fly our flag’

Tremendous achiever over 2 decades. And I hope all the do gooder namby pamby wowsers who wanted it cancelled hang their heads in shame. Let people live their lives.

what a kick in the pants for lisa carrington. if anyone deserves to carry it is her. sure she has done it before but she really deserves to do it again. done far more than adams