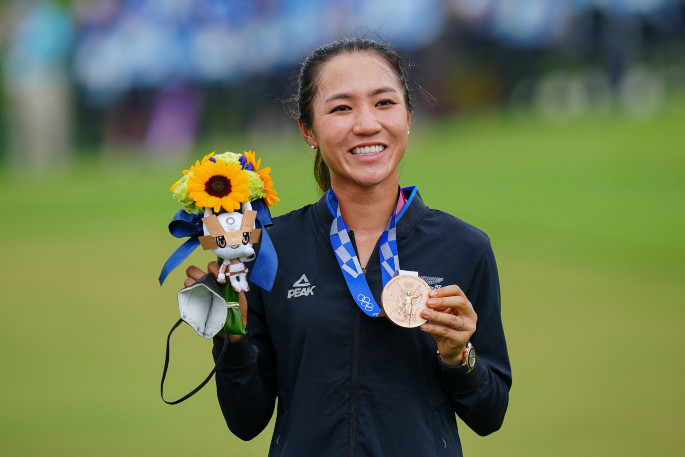 Today is the final day of the Tokyo 2021 Olympics, with the Men's Marathon Final with Malcolm Hicks and Zane Robertson, Men's Keirin Quarterfinals with Callum Saunders, and Women's Omnium Scratch Race with Holly Edmondston still to come.

The men's marathon started at 10am NZ time. For those trying to spot the Kiwis, Malcolm Hicks is in bib #3102 with Kiwi Zane Robertson wearing #3104.

Yesterday Lydia Ko survived a tense, see-sawing final day, including a play-off for the silver medal, and eventually earned the bronze in the women’s golf tournament.

Later she dedicated it to her grandmother, who died just before the tournament, and to her country.

It is the New Zealander’s second successive Olympic medal, following the silver she picked up in Rio in 2016.

Four golfers vied for the medals most of the final day.

Lydia, 24, began the day in superb fashion, carding birdies on the second, third, fourth and fifth holes. Mone and Aditi faltered and when Nellie fired a double bogey on the seventh, she was suddenly sharing the lead with Lydia at 14 under.

However, after a sensational first nine of 31, Lydia had successive bogeys, which took away much of her momentum. Mone fought back and Aditi lingered nearby.

Nellie always looked the most likely winner, but nothing was sure, especially when Lydia birdied 13, 14 and 15 to put herself right back in the reckoning.

When rain and lightning caused play to be temporarily halted while the leaders were on the 17th, Nellie was 17 under, Mone 16th under and Aditi and Lydia were at 15 under.

But Lydia and Mone birdied the 17th. That meant going to the final hole, Lydia needed a birdie to draw level with the leaders.

Nellie parred safely, Mone found herself with an awkward lie in a bunker and bogeyed and Lydia missed a long putt for the birdie she was looking for. She left herself a putt of just over a metre to ensure a medal and breathed a sigh of relief when she sank it.

In the silver medal play-off with Mone, Lydia’s drive found the fairway bunker and she lost the hole.

A feature of Lydia’s play on the last day was how much she seemed to be enjoying herself. A smile was never far away, she high-fived Nellie after the American sank a putt and then said admiringly, “a beauty” when Nellie drove down the 18th. When Nellie won the tournament, Lydia went across and hugged her instantly.

Lydia was equally generous spirited towards Mone during the play-off.

Later Lydia said it had been an exceptionally emotional week for her.

“We got the news that my grandmother had died when I was flying here,” says Lydia. “In a normal week I’m not sure I would have competed.

“But I wanted to do well for my grandmother, to make her proud.”

“There were a couple of bits I could have done better, but you always feel that. I’d like to have won a different colour medal, but I was very grateful to be one of the three medallists.”

She says she hoped she’d be able to feed off the momentum of her good week in Tokyo while she played the rest of the season. 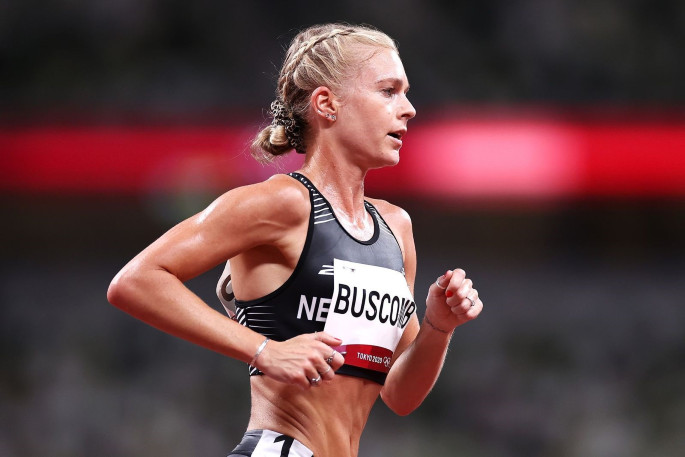 Camille Buscomb ran her season’s best time in finishing 19th in the women’s 10,000m final on a busy final session of the athletics track programme.

The heat was challenging but Camille ran her own race and finished well.

"I enjoyed the race," says Camille. "I wanted to finish strong and feel good. The season's best time was nice in tough conditions."

She says she would now focus on the Paris Olympics in 2024.

"That's the goal. I really want to get there."

The 10,000m was something of an Ethiopian celebration in a bizarre sort of way.

Ethiopian-born Sifan Hassan, now running for the Netherlands, won in 29min 55.32s, giving her two golds and a bronze in distance events this week, while second went to Ethiopian-born Kalkidan Gezahegne, now running for Bahrain. The bronze medal went to Letesenbet Gidey of Ethiopia, who led for most of the race. 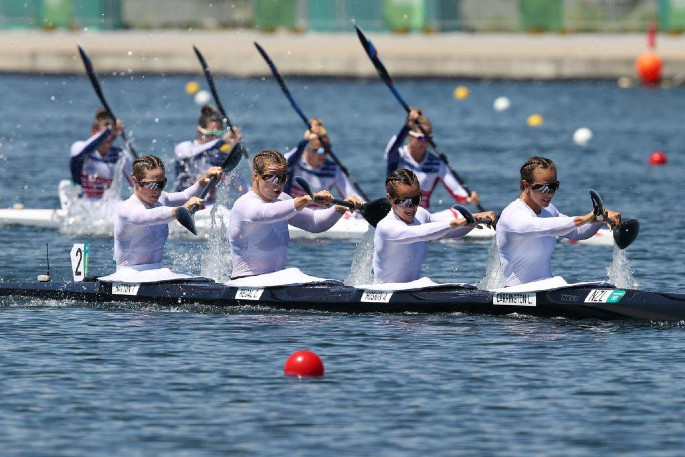 The high-performing New Zealand women's kayakers today narrowly missed out on adding a fourth medal to their haul from Tokyo.

New Zealand – Lisa Carrington, Alicia Hoskin, Catlin Regal and Teneale Hatton – finished fourth in a quality final of the K4 500. The race was won by Hungary, Olympic champions in 2012 and 2016, in 1min 35.463s. Bulgaria were second, Poland third and New Zealand fourth in 1min 37.168s, just ahead of Germany.

The New Zealanders were unable to establish a lead at the start, unlike in previous races, but at the halfway point were very handy in third. However, the Hungarians were strong and Bulgaria and Poland timed their runs to the finish well.

In their semi-final earlier in the day, New Zealand led for much of the journey then seemed to take their foot off the pedal near the finish to place second behind Poland.

The result in the final means that the New Zealand flatwater canoeists finished the regatta having made five finals for golds in the women’s K1 200, K1 500 (both Carrington) and K2 500 (Carrington and regal), fourth in the K2 500 today, plus fifth in the men’s K2 1000 (Max Brown and Kurtis Imrie). 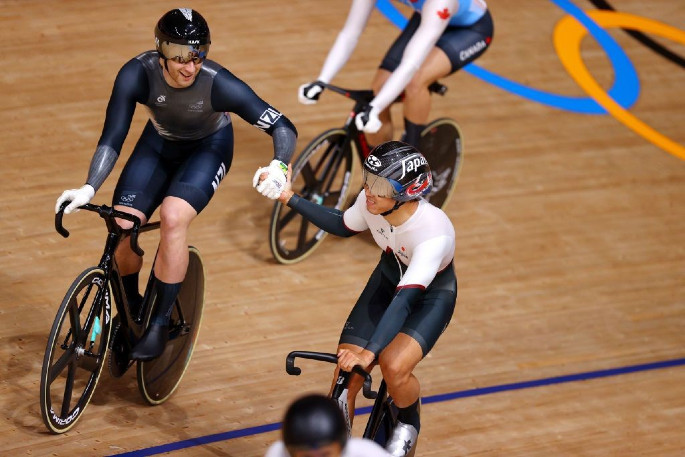 Ellesse Andrews battled Canadian flyer Kelsey Mitchell in the women’s sprint 1/8 finals. Ellesse, already a silver medallist in Tokyo, rode a smart tactical race and was well placed for the final sprint, but Kelsey, fourth in the world championships in this event last year, caught her right on the line for the narrowest of wins.

The result pushed Ellesse into the repechage, where she faced China’s Tianshi Zhong and Ukrainian Olena Starikova, with the winner to progress to the quarter-finals.

Ellesse was locked in a duel with Tianshi and shaded her on the line. Unfortunately, Olena came over the top and won by a tyre width, eliminating the New Zealander, who seemed philosophical afterwards.

“I left it all out there,” says Ellesse. “I emptied the tank and gave it 100 per cent. I can’t be disappointed.”

Sam found himself boxed in and in no position to drive for the line in his first round ride, and so was consigned to the repechage route.

Riding at the front as much as possible, Sam looked to have earned himself the second of the two qualifying placings in his repechage, but was edged out on the line by Jair Tjou En Far of Surinam by the infinitesimal margin of 0.04s.

Callum fared well in the sprint for the line in his first round race, finishing second to Japan’s Yuta Wakimoto with three progressing to the quarter-finals tomorrow.

Callum, 25, says it felt great to be riding in his first Olympics.

“Just making it to the start line was a thrill, then making it through to tomorrow in the keirin was the cherry on top. I’ll see if I can continue the good times,’ says Callum.

He says he’d drawn inspiration from the medal-winning rides of Ellesse Andrews and Campbell Stewart, and that his preparation for the keirin had been helped by closely studying the riders’ form in the sprints to assess their strengths and weaknesses.

In the men's madison, a strength-sapping 50km race with 20 sprints, New Zealanders Campbell Stewart and Corbin Strong finished 11th, after taking points in one sprint. Their cause was not helped early on when Corbin had a fall.

The race was won narrowly by world champions Denmark with 43 points, from Britain and France on 40 points. Denmark's average speed for the 50-minute journey was 59.6 km per hour.