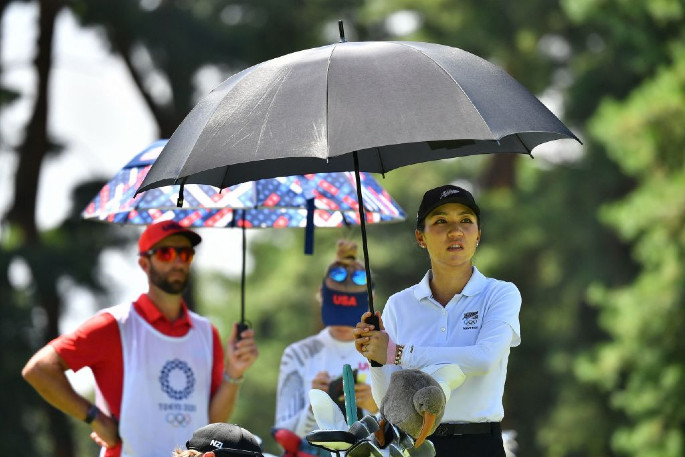 Lydia Ko shading from the heat during yesterday's round. Photos: NZ Olympic Team.

Lydia Ko fired a 66, the best round of the day, to haul herself into medal contention in the Olympic women’s golf tournament yesterday.

Ko, the silver medallist in Rio five years ago, lies on 203, 10 under par, and is in a tie for third with three other golfers.

The tournament is led by American Nelly Korda, who is on 15 under par, and Indian Aditi Ashok is the surprise package, in second place on 12 under.

Lydia, who has shot 70, 67, 66, is level with Australian Hannah Green, who sank a late birdie to climb to 10 under, Denmark’s Emily Pedersen and Japan’s Mone Inami, who dropped a shot at the last.

The placings are especially significant because there is a threat of a typhoon for Tokyo tomorrow with a suggestion the fourth round might be cancelled, in which case the four golfers would share the bronze.

In an effort to get around the weather problem, organisers have pushed the start time for the fourth round forward to 6.30am, though the leaders would tee off several hours later.

Defending champion Inbee Park of Korea, a former world No 1, is out of the running at 3 under, but she has fared better than several other big-name golfers. American Lexi Thompson is 1 under and Canadian Brooke Henderson and Thailand’s Ariya Jutanugarn are on level par.

Lydia kept her nerve well yesterday. Her approaches and scrambling were excellent, but even so she faced some tricky putts for par and sank them all. She was the only one of the frontrunners who did not card a bogey in the third round.

The New Zealander was asked about her potential tactics for the final round and explained the dilemma.

“If I really go for it tomorrow, I could fall further behind, or I could end up on the podium. That’s the thing about golf. You never know,” says Lydia.

She says she had her fingers crossed the weather allowed the fourth round to be played.

“The forecast for tomorrow is a little better than it was a couple of days ago.”

The heat on the course yesterday was fierce and some of the golfers visibly wilted.

“Derek, my caddy, did everything he could for me. He constantly had an umbrella over me, he kept the ice bag ready and he made sure I stayed hydrated. Also a friend gave me an electrolyte substance to add to my water.

“You give it 110 per cent of everything you’ve got and you’re still just trying to survive out there!” 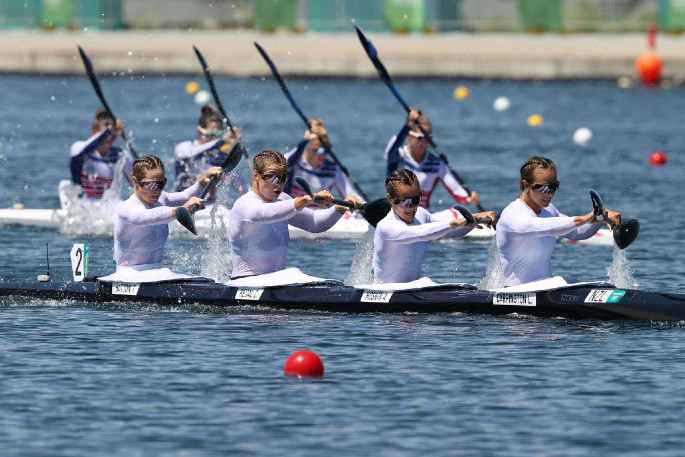 Women's paddlers through to semis
The New Zealand kayakers continue to put a smile on their supporters’ faces.

The paddlers have already made four finals, and won three gold medals, in Tokyo and yesterday the women’s K4 500 – Lisa Carrington, Teneale Hatton, Caitlin Regal and Alicia Hoskin – advanced without problems to the semi-finals.

The New Zealanders led their heat by more than half a second at the halfway point, but slowed in the race for home and were overtaken by Hungary. With the first two place-getters straight into the semis, it was somewhat academic. New Zealand recorded 1min 33.959s.

The six boats that earned direct entry into the semi-finals today were Hungary, New Zealand, Bulgaria, Canada, France and Ukraine.

Far from resting on her laurels - three gold medals - Lisa is desperately keen for the K4 to do well.

“I’m just so excited to finish off the Olympics with these girls," says Lisa.

Teneale says she had drawn confidence from watching Lisa and Caitlin earlier in the week. “Seeing these girls out there crushing it in K1 and K2 gives you confidence to get in the boat with them. They've had pretty of practice in the 500 these last few days,” says Teneale.

"There's something pretty special about combining forces at the end of the week,” says Alicia. “This is our last event... it's cool to do it all together. But we're not getting ahead of ourselves." 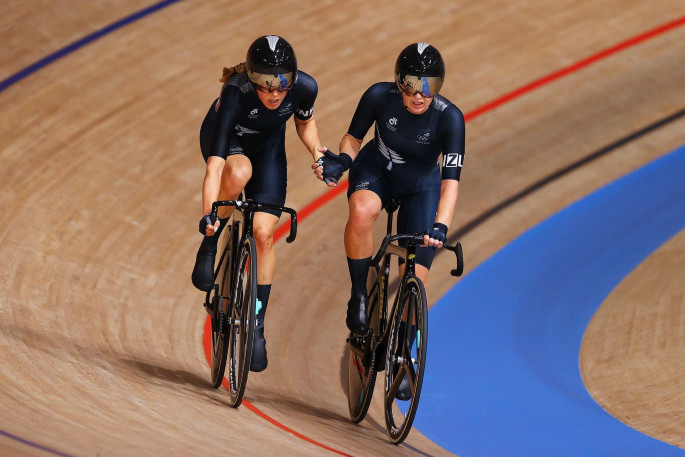 Ellesse Andrews impresses again at Velodrome
One day after her exciting silver medal performance in the keirin, young New Zealand cycling discovery Ellesse Andrews was back in the velodrome showing her class again yesterday, this time in the women’s sprint.

In the qualifying ride, Ellesse was timed at 10.563s and actually held the Olympic record for about 25 minutes. Her team-mate, Kirstie James, was timed at 11.1116s. With the first 24 to progress to the first round, Ellesse ended up getting through in 11th spot, but Kirstie was 27th and missed out.

In her first round contest, the 21-year-old New Zealander rode a smart, strong race to outmanoeuvre capable Australian Kaarle McCullogh and move into the round of 16.

Taking on experienced Ukrainian Olena Starikova, Ellesse was pipped on the finish line after a good tactical battle.

The defeat meant Ellesse had to go the repechage route. Having her fourth ride of the evening, she beat highly rated Shanju Bao of China with a perfectly timed sprint to move into today’s last eight round.

Ellesse said later she was excited, and somewhat surprised, with how her Olympics had gone.
“Anything can happen in a competition like this,” says Ellesse. “I just try to put everything out there on the track and try to put myself in a position to have a chance.”

She says she was “stoked” to get the New Zealand record, and briefly the Olympic record, for the sprint.

“I just want to keep going and giving every race 100 per cent.”

In the women’s madison, New Zealanders Rushlee Buchanan and Jessie Hodges struggled to make an impression and eventually finished 11th of the 15 starters.

The women’s madison was making its Olympic debut. The race is named after Madison Square Garden in New York, where distance cycle races were held frequently in the early years of the 20th century. The race is ridden over 30,000m – 120 laps – with a sprint for points every 10th lap.

The New Zealanders could not pick up any points in the sprints, which were utterly dominated by Britain (Katie Archibald and Laura Kenny), who won with 78 points. Denmark were second with 25 and Russian Olympic Committee third with 26.

There were three serious crashes during the fast-paced, frenetic race. Happily the New Zealanders were not involved in any. 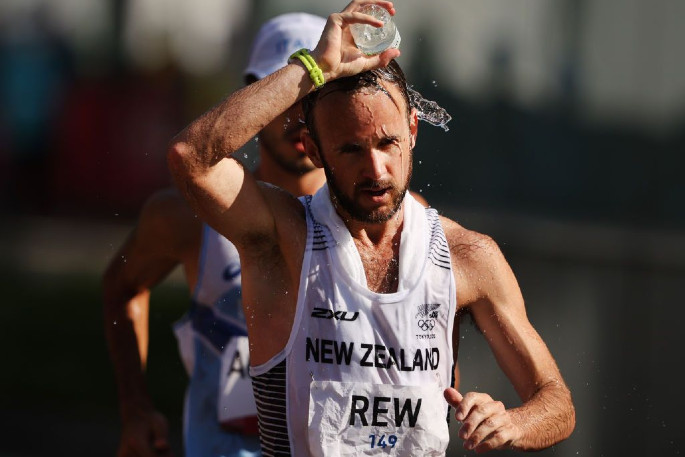 His record is remarkably consistent – he has three top 12 performances at world championships as well.

The heat in Tokyo during the Olympics has been oppressive, but Quentin seemed to handle it well. He was in the middle of the pack through most of the journey and picked up a few places over the final few kilometres.

His time was 3min 37.33s, which was 7min 25s behind gold medallist David Tomala of Poland.

Jonathan Hilbert (Germany) and Evan Dunfee (Canada) picked up the silver and bronze medals.
Quentin is from Wellington, but in 2015 moved to Melbourne, though he has continued to represent New Zealand with pride at major championships. 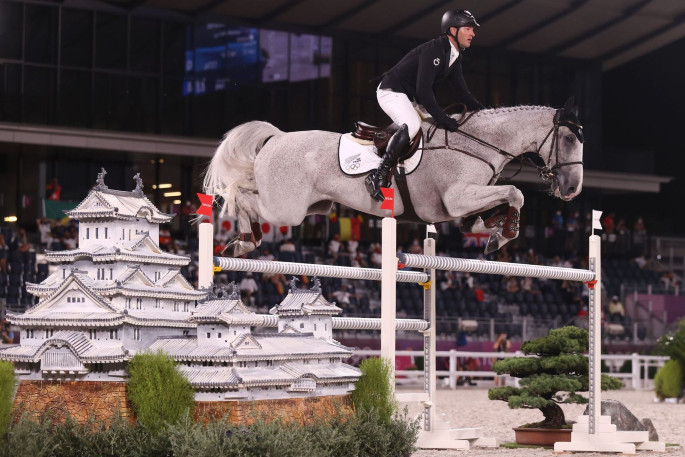 Showjumpers miss out on team final
New Zealand had a tough time of it in the equestrian team showjumping qualifying round yesterday and were unable to advance to today’s final.

Needing to finish among the top ten teams to progress, New Zealand totalled 39 team points and finished 14th in the field of 19.

Experienced Bruce Goodin, who has been riding Danny V for three-and-a-half years, led off for the New Zealanders, but didn’t have the best time of it. He knocked down four fences and incurred one time fault, for a total of 17 faults.

Bruce, who lives in Sweden these days, says he had been looking for a much better score, but indicated he found the course challenging in a subtle sort of way.

Next up was Tom Priebe on Popeye. Tom did not compete in the individual showjumping, so was making his Olympic debut. After an encouraging start, he had three rails down and one time fault for a total of 13 faults.

“That was rider faults,” says Tom. “He was going great and I think he’d have had a clear round, but I had a bit of trouble with my hands in the middle. I got it together and he finished well.”

Tom says he had been on a bit of a roller-coaster with his Olympic experience, going from non-travelling reserve, to reserve, to competitor.

“It felt special to compete and I was proud to be at the Olympics.”

New Zealand’s third rider was Daniel Meech on Cinca 3. After a very impressive opening to his round, Daniel came unstuck right at the end when Cinca struck two rails. With one time fault as well he totalled 9 faults.

The leading qualifiers were the Swedes, who had a wonderful evening. All three of their riders went clear within the allotted time, so they incurred no faults.