Battle site to be redeveloped 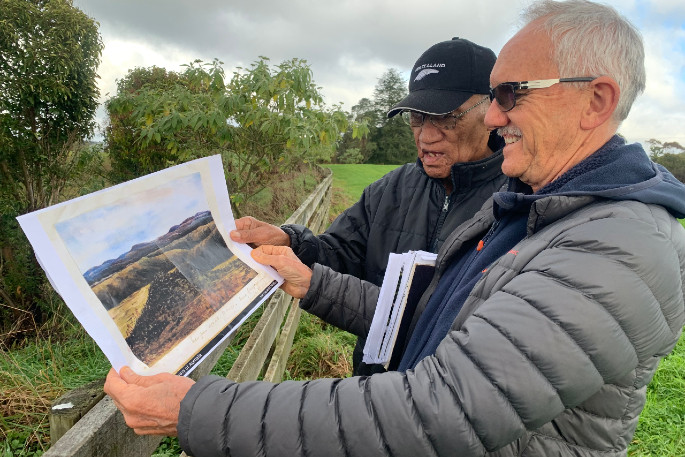 The redevelopment of the Te Ranga battle site reserve in Pyes Pā has begun this week.

The plan is to provide a more appropriate setting befitting its historical importance, as well as a recreational reserve planted up to replicate the original forest cover.

“This is an exciting start to the redevelopment of the Te Ranga reserve – something that we’ve been aiming for, for quite some time now,” says Buddy Mikaere from Pukehinahina Charitable Trust.

A small group including Paul Greenshields from Bay of Plenty Regional Council land management, Clinton Bowyer – a landscape architect at Tauranga City Council – Peri Kohu and Tamati Tata from Ngāi Tamarāwaho, Buddy Mikaere, David Clayton-Green from CGC Ltd, and Grant Schuler from Arbor Care Ltd gathered for a blessing over the site prior to the start of excavation work.

“The work is going to involve putting in a soundproof barrier down at the end of the reserve near where the present memorial is,” adds Buddy

During a recent ground penetrating radar survey, a trench was identified that extends along the southern end of the site. Now filled in, it is believed to have once extended across the valley. The memorial sits directly over the trench.

Buddy says the plan may involve a replacement for the memorial as well as a structure built to house information about what happened there in June 1864.

“There will also be some landscaping work,” he says, “but the major part of the work here will be the clearing and replanting of the very steep scarp that’s on the eastern side of the reserve.”

All of the noxious weeds down the hill will be taken out and replaced with planting.

“The idea is to try and recreate the native bush that once upon a time was here, and to create a recreational space that people can come and walk through.”

The project may take up to two years to complete and will include removing the hedge on the Pyes Pā side of the site, with a bund formed to mute traffic noise that travels across the ground.

“We are pleased to have the support of our three councils for this project,” says Buddy. “We’re also able to use the fill that’s being excavated to create storm water ponds down on Kennedy Road.”

This historic site has been left as a barren paddock bordered by a rough hedge for a very long time, it deserves better. To the developers, it would be great if the trench could be excavated. And please remember this is everyone’s history, here’s an opportunity to be truly inclusive.

How is this project to be funded? Could Sunlive find out and publish please.

The Te Ranga battle site is clearly of historical importance to some not all. Why was the battle site allowed to deteriorate by the very people who now request the redevelopment. I hope therefore that the majority of the redevelopment cost will be borne by Ngai Tamarawhao and the Pukehinahina Charitable Trust ( including the1864 replica sound-proof barrier).

Living in the past.

Total waste of money, what will these boffins dream up next to fill in their day.

I agree with you that we should not be funding "wish list" projects AT THE MOMENT. However, this one has some good benefits and, historically, it is right and proper to respect the site. In the scheme of things the required expenditure is probably small, but I agree that is no excuse. I think the problem here is not that it shouldn’t be done, but rather the timing of WHEN it should be done. Maybe could wait until we have a democratically elected Council restored.

So a nice to have for a minority. So will they be putting up a substantial contribution for in effect a memorial . Perhaps a lot of volunteer workers will come from the people wanting this.

i hope no money is coming from the ratepayers for this

I thought we were supposed to be sticking to infrastructure - forgetting the ’wish’ items. This is a total waste of money and yet another example of the minority group being given priority over things that are really needed by the populous