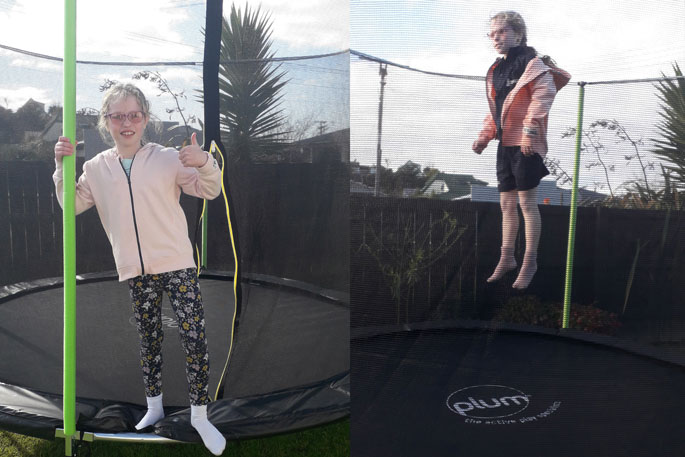 Tauranga eight-year-old Chloe Crump’s life revolves around physiotherapy and the constant battle to keep her lungs clear of mucus.

Chloe has bronchiectasis, which is as nasty to a child’s lungs as it is to pronounce. Bronchiectasis causes lungs to become damaged and scarred, while mucus build-up breeds infection-inducing bacteria.

She’s also been diagnosed with asthma, autism and ADHD.

Chloe goes to regular school part-time and to Northern Health School once a week – one of three such schools in New Zealand which support students dealing with health-related challenges.

Chloe enjoys school and loves writing, but the energy it takes to breathe can be exhausting, while being on the spectrum can make life overwhelming.

“Two months ago, she needed two-and-a-half weeks of IV antibiotics and spent 10 days in hospital.”

One way to keep her lungs clear of nasty bacteria is via a nebuliser, which is used twice a day when Chloe is healthy and up to five times a day when she’s not.

For an adult, being forced to have up to five physio sessions a day would be hard.

For an eight-year-old, the tedium is magnified because it’s so boring when there are so many other fun things that could be done instead.

One of those fun things is playing on a trampoline.

“For kids with bronchiectasis, having a good trampoline is like gold. It’s one of those things you have to have,” says Rachel.

“The bouncing helps trigger a cough reflex and that can loosen the mucus in her lungs, so it’s a really good activity to help her.”

Chloe used to have one to play on, but wear and tear made it dangerous.

Ripped pads, a broken net and an unsafe surface had Rachel scared her daughter would go through the floor.

Once HELL found out how much a new trampoline would help Chloe, there was only one thing to do – buy her a new one!

“For her to have access to a trampoline and the ability to use natural physio to balance out the medical physio means the world to us,” says Rachel.

“If Chloe doesn’t do her physio, she won’t expel the mucus as she should and she’ll get more infections, the disease will progress and in a worst case scenario, lung transplants are considered.”

She can do flips and often plays on it with her friends. Her big brother Andy has a trampoline scooter and uses it to practise his tricks on it, too.

Her autism can make it difficult to maintain long-term friendships, but Chloe still loves the company of other kids.