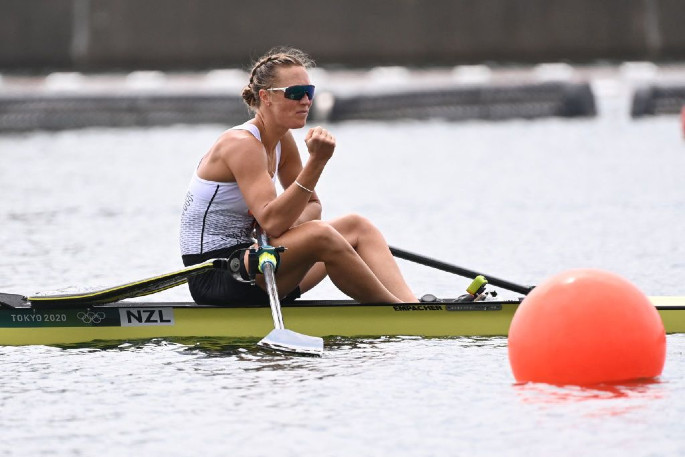 New Zealand rowing supporters, all too familiar with Twigg’s Olympic frustrations over the years, were desperately hoping she would win gold to cap off her stellar career, and she delivered in style, leading the race all the way and drawing inexorably further ahead.

The Hawke’s Bay rower was 21 when she appeared in her first Olympics, in Beijing in 2008, and placed ninth in the single sculls.

Four years later in London she was frustratingly close to a medal but had to settle for fourth. It was the same story in Rio de Janeiro in 2016, even though by then she had won a world title and was a strong medal hope.

Twigg retired after Rio and had a couple of years away from the sport to try to regain some perspective in her life.

When she returned, she had the strong goal of winning a medal, preferably gold, in Tokyo in 2020. She has won five world championship medals, but it was the ultimate, an Olympic medal, that had eluded her.

There was no Tokyo Olympics in 2020, but she pressed on and now, at 34 years of age, she is an Olympic champion.

It’s a story that would appeal to a Hollywood scriptwriter. No wonder there were tears in the eyes of so many New Zealand rowing fans when Twigg crossed the line.

Twigg said later that her message to other sportsmen and women who perhaps had disappointing results was that “if you believe in yourself and keep going and dreaming then this can be the result”.

She says she didn’t want to “light too many matches” early on, in the first half of the race. But once she took the lead she felt fairly confident.

“It was part of the plan. I wanted to be in a position of power over the last 500 metres. I knew it was a tailwind and thought that anyone who came at me was going to have to do a lot.”

She says she had a momentary flicker of concern after finishing.

“To be honest, I never heard the buzzer. I looked behind and wondered if I’d stopped too early, but then I saw the bubbles, so all good,” says Twigg. 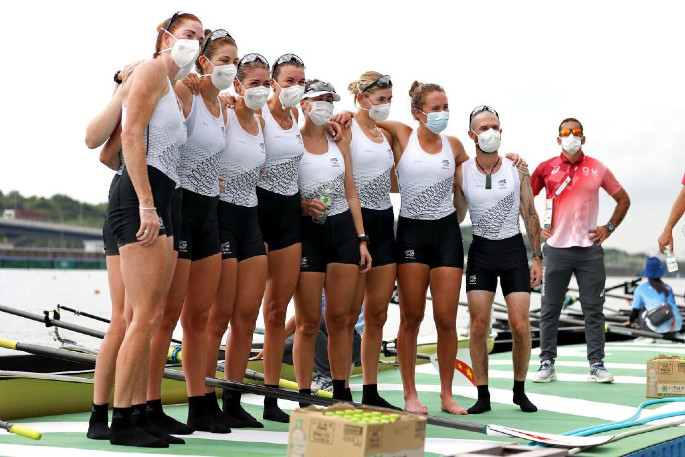 Gold and silver for eights crews

Following directly after the exciting single sculls gold medal effort of Emma Twigg, the New Zealand women were edged into silver place by Canada, and then the New Zealand men stormed home to take gold.

In the space of an hour New Zealand had won two golds and a silver and were the toast of the rowing world.

The men – Tom Mackintosh, Hamish Bond, Tom Murray, Michael Brake, Daniel Williamson, Phillip Wilson, Shaun Kirkham, Matt Macdonald and cox Sam Bosworth – took a while to impose themselves and at the 500m were third behind Germany and Great Britain.

But the New Zealanders really put the foot down in the middle stages of the race and by 1500m had opened up nearly a length lead over Britain.

The Germans came home very fast and Britain were also quicker than New Zealand in the closing stages, but the New Zealanders had enough in reserve to reach the line nearly a second ahead of Germany.

New Zealand had finished second in their heat, improved to win the repechage and looked mighty powerful today, evoking now dimming memories of the fantastic 1972 New Zealand rowing eight that won gold at the Munich Olympics.

The New Zealand women’s eight only narrowly failed to make it three golds for their country today.

New Zealand – Ella Greenslade, Emma Dyke, Lucy Spoors, Kelsey Bevan, Grace Prendergast, Kerri Gowler, Beth Ross, Jackie Gowler and cox Caleb Shepherd – were in third place for the first 500 metres, behind Canada and Australia. But once things settled down the race developed into a duel between New Zealand and Canada.

They’d met in the heat when New Zealand had edged home. This time Canada started faster and it was New Zealand playing catch-up.

Over the final 500 metres the Canadian began to fade, while New Zealand and China closed.

For two of the New Zealand crew, Prendergast and Kerri Gowler, that gave them a silver medal to add to the gold they won yesterday in the pair. 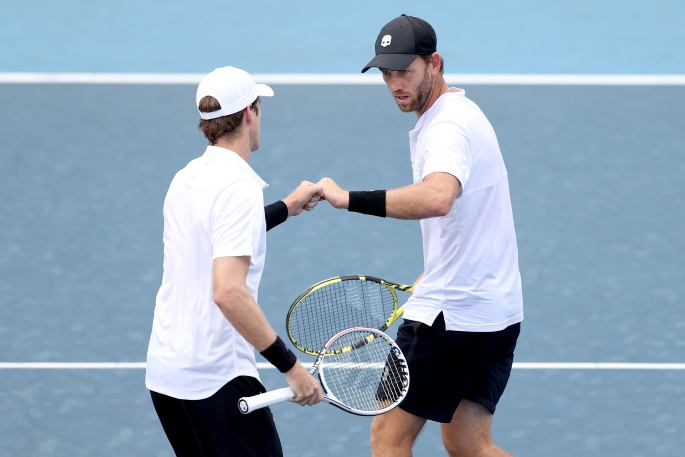 Daniell and Venus take the bronze

The New Zealanders had to battle hard to beat Americans Tennys Sandgren and Austin Krajicek 7-6, 6-2 in the third place play-off.

They are the first New Zealanders to win an Olympic medal for tennis since Anthony Wilding won the singles bronze medal in Stockholm in 1912.

Daniell and Venus combined superbly to frustrate the hard-hitting Americans. In fact, they played so well together, they provoked questions about why they don’t team up on the pro tennis tour.

The match took nearly 1h 50min, and contained an extraordinary number of deuce games. To their credit, the New Zealanders stayed calm and put away some deft volleys to frustrate the Americans at critical times.

Unlike some top tennis players, who are somewhat ambivalent about tennis at the Olympics, the New Zealand were unwavering in their desire to do well.

As Daniell said yesterday when contemplating the bronze medal play-off: “When I was a little kid I dreamed of standing on the podium at the Olympics.”

Venus says he and Daniell had targeted the Olympics for a couple of years.

"We've both been on the ATP tennis tour for a long time, and know each other well. We realised that with our rankings we would get the opportunity to play doubles here and we spoke about it often. We played a couple of tournaments together to help prepare.” 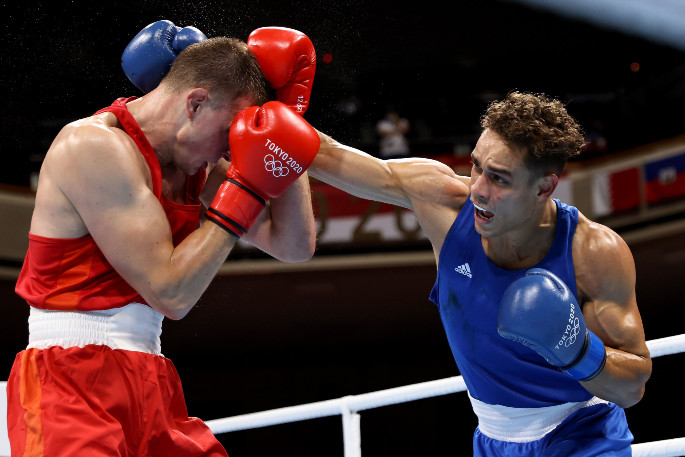 Heavyweight boxer David Nyika assured himself of an Olympic medal with a convincing victory over Uladzislau Smiallikau of Belarus in their heavyweight quarter-final yesterday.

Under boxing rules, the losing semi-finalists do not box again and are both awarded a bronze medal.

Nyika, 25, was extremely slick against the Belarusian, hitting him repeatedly with his left jab and opening up a cut over his left eye in the first round. As the fight wore on the New Zealander also employed some telling upper cuts.

His ability to switch repeatedly from orthodox stance to southpaw added to Smiallikau’s woes and not surprisingly the Hamilton man was awarded a unanimous decision, though to the surprise of most, one judge awarded the third round to the Belarusian.

He looks a classy boxer, composed and very evasive, with quick feet and good head movement.

In his next bout, on Tuesday, Nyika, the tournament fourth seed, meets the pre-event favourite for the gold medal, Muslim Gadzhimagomedov. The tough Russian, who has won both his fights in Tokyo on unanimous points decisions, won the heavyweight world championship in Yekaterinburg, Russia, in 2019. 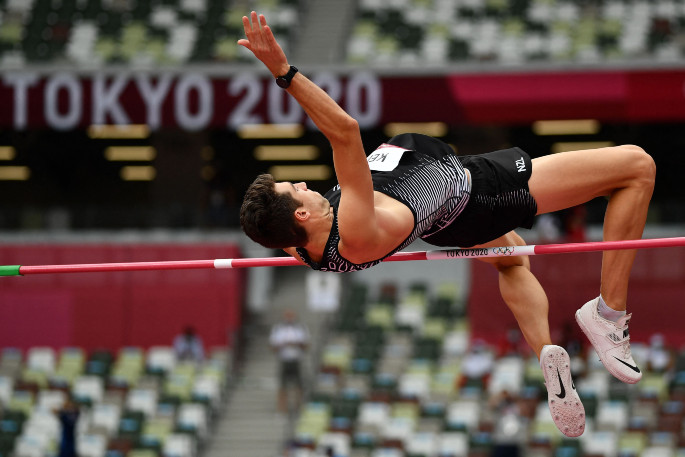 Kerr through to high jump final

Hamish Kerr had few problems qualifying for the high jump final when the Olympic track and field programme kicked off yesterday.

Kerr, 24, from Christchurch, was one of 13 athletes who cleared 2.28m and so progressed to the final on Sunday.

There were 30 high jumpers in the qualifying field. 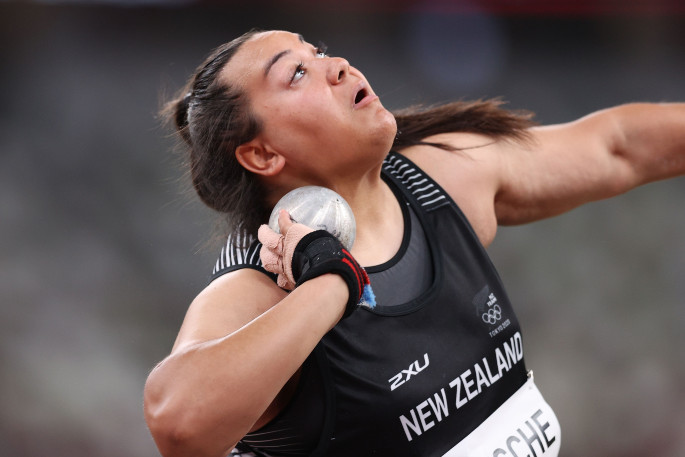 Dame Valerie Adams and rising star Maddi Wesche both had smiles on their faces after the women’s shot put qualifying round yesterday.

Adams had three good throws – 18.75m, 18.59m and 18.83m - and qualified sixth for the final. She has two Olympic gold medals and a silver in this event and her presence will cause the rest of the field to have a nervous flutters.

China’s Lijao Gong was the top qualifier with a distance of 19.46m.

The final will be on Sunday morning.

In the women’s 5000m New Zealander Camille Buscomb struggled to stay with the field in her heat in which she finished 14th in 15min 24.39s. That was well below her personal best but near to her recent best form.

The great Sifan Hassan of the Netherlands won the heat in 14min 47.89s, which proved to be the fastest qualifying time. 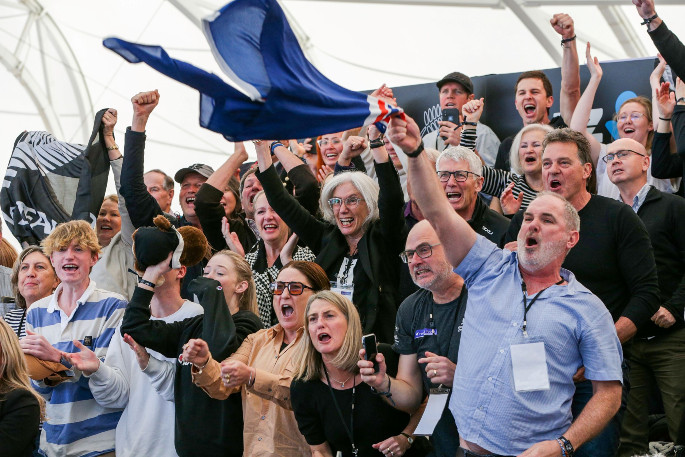 It started with a gold and from there the stage was set for a terrific day of rowing for the New Zealand Team. Watching on from NZHQ were proud parents who could barely contain their excitement as the rowers crossed the line race after race.

The crowds packed into NZHQ early, making sure the prime seats were had for Jordan Parry’s race in the Single Scull – Men C Final, and the vocal cords were warmed up for all the cheering that was to follow.

Ahead of the racing, an New Zealand Olympic Committee spokesperson spoke to Greg Wilson – father to Phillip in the New Zealand Men’s Eight – who was full of hope for the day ahead.

“To the guys in Tokyo, you know what to do. You’ve done it all before – now is your time!” says Greg.

And what a time they had, with Emma Twigg putting on a show for the crowds and her Rowing New Zealand family as she rowed to Gold.

Following the silver win, Emma Dyke’s mother, Nicky, says how amazing it was to watch her daughter and the crew reach the podium.

“I’m relieved and just really, really stocked. It’s all quite surreal but so amazing!”

There was jubilation as the men took the lead, sparking the crowd to get to their feet as the boat crossed the 1000m line. By the time the men reached the finish line to claim the gold, the crowd was almost in the air.

After the race, Bosworth’s father Pete says it’s been an “unreal race”.

“It was a big race for the boys and a proud moment for New Zealand.”

Greg Wilson shared the sentiment, describing the race as “indescribable” and “a dream come true” for son Phillip.

“He’s had this in his plans for many years and to achieve this and fulfil it, we are so proud.

“It’s been a pretty tough day and my stomach has been churning but now I’m a bit worried about my cheeks – they are quite sore from all the smiling.”

Kiwis in action at the Tokyo Olympics today - NZ times: