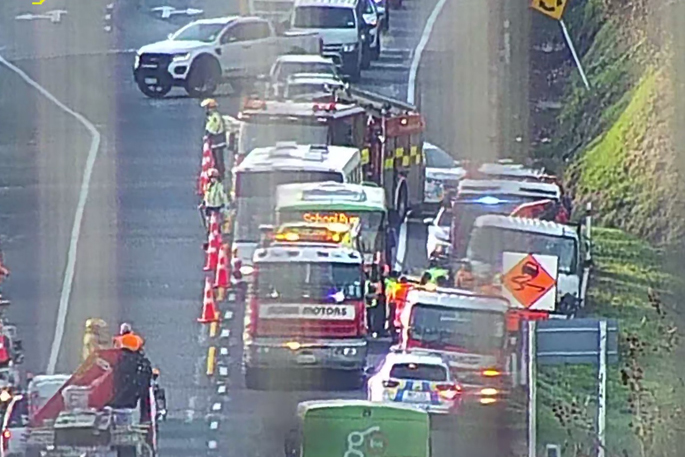 Emergency services have been called to the crash. Image: Tauranga City Council.

UPDATE 9:15AM: State Highway 29A between Oropi Road and Pyes Pa Road roundabout is now clear following a multiple vehicle crash this morning.

Waka Kotahi NZ Transport Agency is reporting both lanes are now clear but congestion remains on the route.

EARLIER: Emergency services are responding to a multiple vehicle crash on State Highway 29A.

A caller to the 0800 SUNLIVE news hotline says a bus, truck and a car have crashed on the road, between the Oropi Road roundabout and Pyes Pa Road.

Tauranga City Council is reporting the multiple vehicle nose to tail accident involving cars, a school bus and a truck.

Council have confirmed emergency services are at the scene.

The one lane of SH29A is completely blocked and major congestion is building back to Welcome Bay Road, says council.

A St John spokesperson says St John was called at 8.14am to the motor vehicle incident.

“One ambulance responded to the scene and St John has assessed one patient in a minor condition,” says the spokesperson.

A police spokesperson confirms police are attending a crash involving a number of vehicles including a bus and a truck on SH29A. 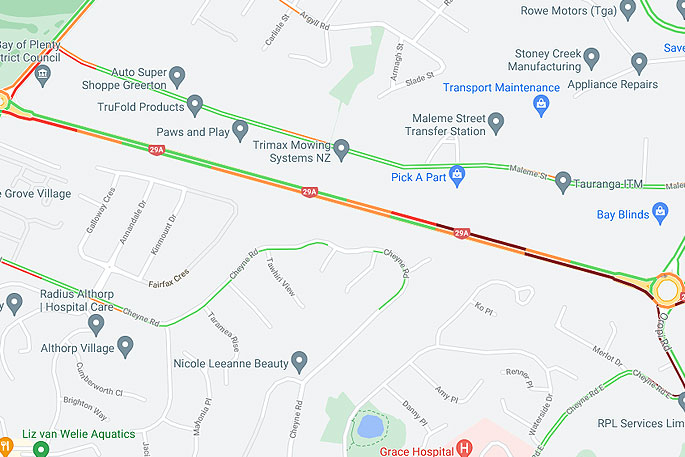 Traffic is stalled on the road. Image: Google Maps.

Waka Kotahi Transport Agency says the road is blocked in both dierections.

"Due to a crash, blocking the west bound lane on SH29A between Oropi Road and Pyes Pa Road roundabouts, delays should be expected.

"Delay your journey or consider using an alternative route."

8:25AM - Reports of a crash on #SH29A (Tauranga Bypass) between Poike Rd and Oropi Rd roundabouts. Please follow directions of emergency services. Delays in the area are likely. Diversions may be required. ^TP pic.twitter.com/mROItROmuo

I wonder if any of the commissioners know what happens when there’s an accident on one of our fragile arteries....? And why impatience in traffic congestion is adding to the statistics that they’re desperate to reduce.