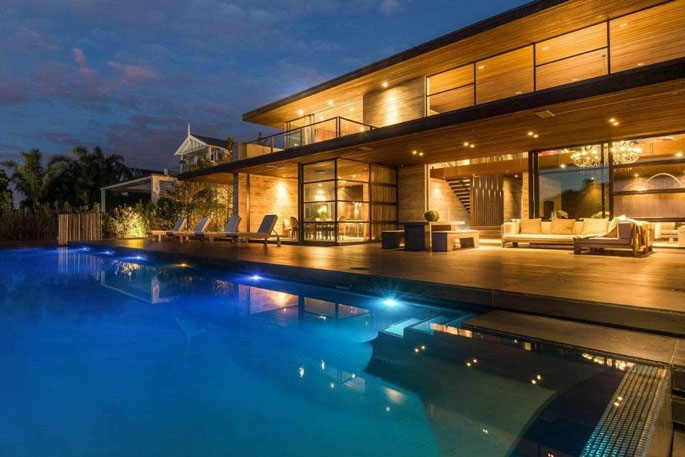 It took three years to sell, but one of Auckland’s top waterfront properties has fetched $17.68 million.

The price has now been disclosed for the sale last year of the David Ponting-designed Westmere house formerly owned by ex-Tauranga mayor Tenby Powell and his wife, PC Direct founder and entrepreneur Sharon Hunter.

The Rawene Avenue property was sold by Sarah Liu of Bayleys Remuera.

It was originally listed with Wall Real Estate with price expectations “around $20 million”.

In September 2016, Powell and Hunter rented the four-bedroom, five-bedroom house out to action-movie star Jason Statham while he was in New Zealand filming the killer shark movie Meg.

The house has also been visited by Prince Albert of Monaco and his glamorous wife Princess Charlene, and has been used as a glamorous venue for functions.

Hunter and Powell have expressed their thanks to their listing agent, saying: “Sarah understood that it would be a unique family who would fall in love with our property, and that it might be a journey to find them. Sarah maintained an unwavering love and passion for our home, and a belief that one day the right family would come along.”

In a video, the architect said the house reflects the owners' desire for a home that would express a sense of timelessness and permanence.

“Concrete is the perfect material for that. It anchors the house to site; it earths it and allows the cedar forms that fold and wrap and define spaces to be playful, yet still feel concentrated and clinical as a series of (architectural) forms.”

Soaring, board-formed concrete walls semi-enclose huge, double-height volumes, and flow seamlessly from the inside to the out. A reflective pond that references a stream reinforces the strong visual links to the harbour beyond.

Not surprisingly, the house was designed for entertaining on a grand scale, with a stunning kitchen perfectly positioned in the centre of the main living floor. The house also has a room that has been described as “the ultimate, underground man-cave” on the lower level, complete with huge screen, bar and pool table.

The interior was designed by Ann Motion, renowned for her work on super yachts. Motion was inspired by the work of French designer Christian Liagre.

And of course, there's that beautiful infinity pool above the harbour.

I agree with the comments and don’t begrudge them what they’ve worked for. But, it is no wonder that expensive, unnecessary schemes like the rubbish bins et al were never questioned, no wonder 10B couldn’t understand why people were concerned about Rate rises, these things are obviously not part of his life style. We need Politicians who are grounded in the everyday reality for MOST people, empathize, and want to do something about it. If your approach to managing money is simply to produce a card and never worry about the balance, you are probably not going to have much respect for other people’s money, either.

Great comments from you both and I stand with you.

Indeed good luck to them. Tenby of course has health issues and hopefully his treatment is going well too. so all the best with that too.

Good luck to them... There will undoubtedly be those that will not understand that rewards come from hard work and huge risk taking by determined people who probably started their journey by working hard at school. Be envious of others if you wish. I can only dream of winning the lottery and rue my own poor performance over the years, rather than blaming somebody or something else for my lack of rewards.