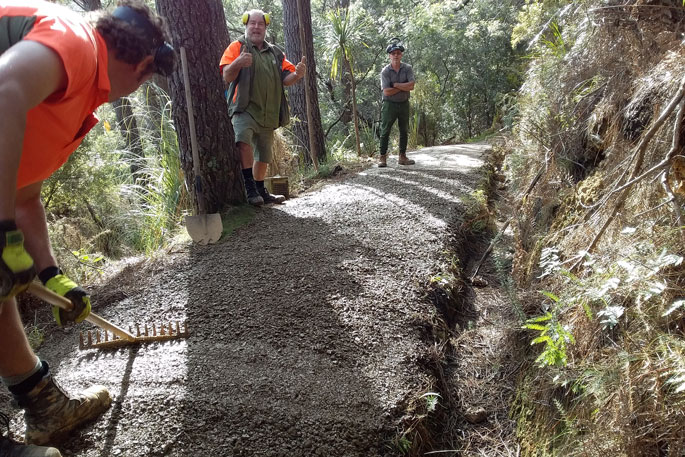 A heavily used walking track in Coromandel is in the final stages of resurfacing by the Department of Conservation.

The Kauri Block Walkway winds its way up a hill above the seaside town, giving views across Coromandel town and its adjacent harbour.

The 1.3km loop track is popular with residents as a location for exercise and respite in nature. It receives an estimated 95,000 visitors a year, a mix of residents and holiday makers exploring the northern Coromandel. It’s a day-use track, suitable for recreational walkers.

DOC’s Coromandel Operations Manager Nick Kelly says the work to resurface the track began in late May when the first of 185 tonnes of gravel – amounting to five truck and trailer loads – arrived near the site.

The gravel has to be spread the entire length of the track and then compacted.

“This has been a really challenging job for the team and members of Ngāti Hei who have been working alongside us,” he says. 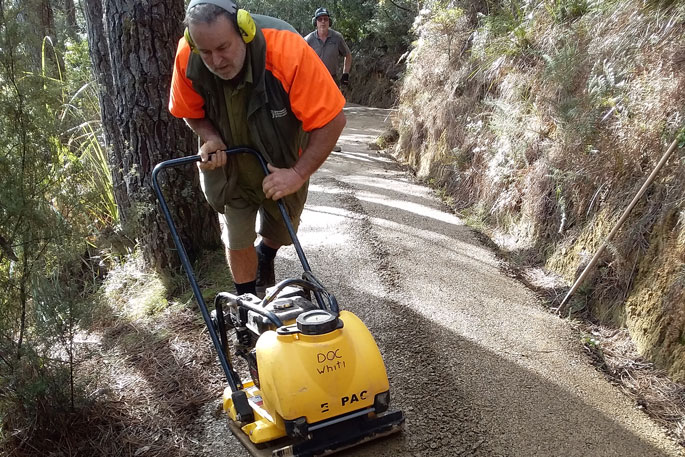 There is no vehicle access up this track, so the gravel had to be distributed by helicopter to five different points, then further spread using powered wheel-barrows and up to 10 people using spades and shovels.

“It’s been hard physical work and despite some pretty miserable winter weather we’ve stayed on target and should finish this job in mid-August.”

Sourcing gravel suitable for the job was a key aspect of planning. With a large kauri plantation nearby, the gravel came from a biologically secure site – HG Leach’s quarry in Paeroa - to ensure it did not include any kauri dieback spores.

It is the first time the track has been resurfaced since it was opened 20 years ago.