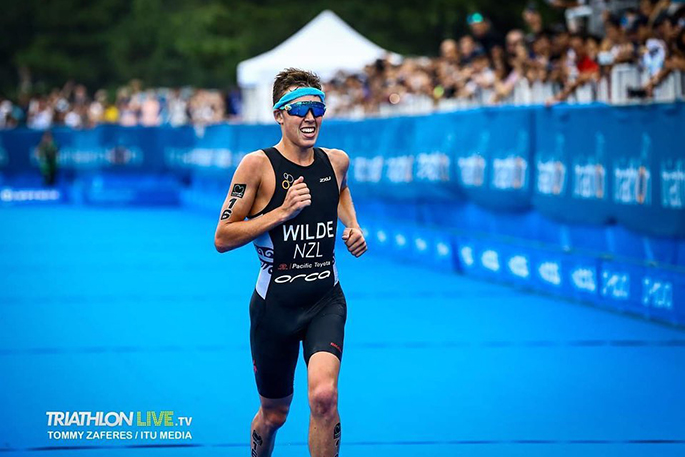 Eastern Bay of Plenty is able to lay claim to another Olympic medallist.

His family booked out the fishing club in town to watch him claim New Zealand's first medal of the Tokyo Games, with local kids taking the morning off school while adults skipped work.

Wilde says his bronze means a lot to the "little community" which is "pretty big on sport".

"It's pretty awesome to bring another medal [back], not just relying on Lisa [Carrington] to bring one back for the eastern Bay," Wilde says.

Ōhope's own Lisa Carrington is a double Olympic champion in flatwater kayaking, while also boasting a bronze to her name.

"We've got so many Eastern Bay athletes at the Games at the moment, so I'm hoping we can bring some more home."

Whakatāne will have to wait to see Wilde and his Olympic bronze medal.

"I don't think I will be home until December unfortunately...my season is only kind of starting after the Games.

"As a normal protocol would go you'd normally have a couple weeks off, put your feet up, have a couple of beers with the boys but now it's just going back on the circuit."

Wilde's rise to the Olympic podium has been meteoric.

"If I look back three years ago I was actually landscaping, building walls and actually just trying to make a dollar to go to races and actually try and put myself into the Commonwealth Games circle.

"I've grown up in a small community and not having massive funding behind me and kind of having to do it mostly myself, having a part-time job working in Tauranga with the boys at Land Dev.

"I only started to go fulltime professional three years ago so to be here in Tokyo and to be getting on to the podium is unreal scenes."

Triathlon wasn't Wilde's first love. He played football and hockey as a kid and then started exploring multisport at high school.

But it was off-road events like the Coast to Coast which caught his eye and he looked up to the likes of Richard Ussher and Braden Currie rather than Olympic triathlon medallists Hamish Carter and Bevan Docherty.

"I wasn't actually into triathlon at all when I was a young kid. I only started the sport five years ago so I didn't actually know too much about triathlon. It wasn't a sport I was engaged with at all.

"I wasn't really into triathlon until 2017 when I toed the line with Cameron Brown, that's when I really started coming into the scene after the Tauranga Half Ironman.

"The passion for the sport grew from there."

And while racing the Ironman world championships in Hawaii are on his to do list, he is passionate about Olympic distance triathlon for the forseeable future.

"I think I definitely will go into that long distance stuff and I'd love to do Kona one day and race the Ironman world champs," Wilde says.

"For me I'll be focusing on Paris, obviously then LA and then Brisbane after that in 2032.

"I think I'll be 33 then so I'll just be at the end of my career I guess so it'll be very nice to try and push for that one and race so close to home which will be pretty epic."

Hayden Wilde isn't done with the Tokyo Games though yet. He will headline the New Zealand team in the inaugural mixed team relay on Saturday.

"We normally actually have it the next day so coming out of a big race and then going into another one is usually not too bad, but having it three, four days later is kind of a first for everyone.

"Normally if you race at a high intensity you normally feel it on the third or fourth day.

But Wilde isn't worried about backing up.

"I think I'll be on a wave for quite a while but I've just got to keep riding it.

"I know that we've got an awesome team around us...so it's going to be pretty awesome and having that extra boost of not just racing for yourself but racing for your team and your country is a whole new thing."

Great to see a proper athlete. What with skateboarding and surfing I was beginning to think the Games were for children and bums.