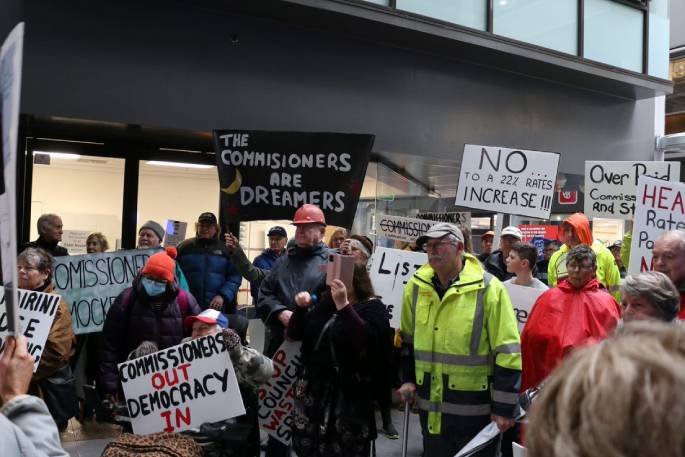 Tauranga City Council commission chair Anne Tolley is sympathising with those who may be impacted by increasing rates as part of the city’s Long-term Plan.

The LTP was adopted in a meeting in council chambers on Monday afternoon.

It comes after members of the Tauranga Ratepayers Alliance protested the rates increase, with steering group member Jordan Williams boldly insisting incompetent but elected politicians would be preferable to the current Commission.

The 2021-31 Long-term Plan has now been adopted by Council but hundreds of protesters, led by the TRA, gathered at Council buildings on Willow Street amid pouring rain.

They marched against rates increasing as high as 17 per cent residentially and 48 per cent commercially in the first year of the LTP.

Tolley, who thanks Council staff for their hard work over the past 18 months, appreciates that rates increase will be challenging for some.

“We are well aware that there is a section of the community here that are on fixed incomes so any increase in cost affects them quite seriously,” she says.

“We are well aware there are people who will find it difficult to pay an increase in anything.”

However, Tolley highlights raised house values, a simplification of some rates policies and ongoing discussions with Minister of Local Government Nanaia Mahuta about inflation adjustments to rates rebates systems, as potential avenues to ease concerns among heavily impacted members of the community.

She says upon arrival in Tauranga, herself and her team - Commissioners Bill Wasley, Stephen Selwood and Shadrach Rolleston - have found a city “overwhelmed by rapid growth”.

That growth has not been offset by steadily increasing rates is one Council argument, increases which are now needed to pay for crucial infrastructure such as roading, piping and community amenities.

“What we have tried to do is make everyone pay a bit more,” says Tolley.

Successful implementation of community projects is seen by Tolley as a way of showing residents Council is listening and that rates increases are delivering desired results. 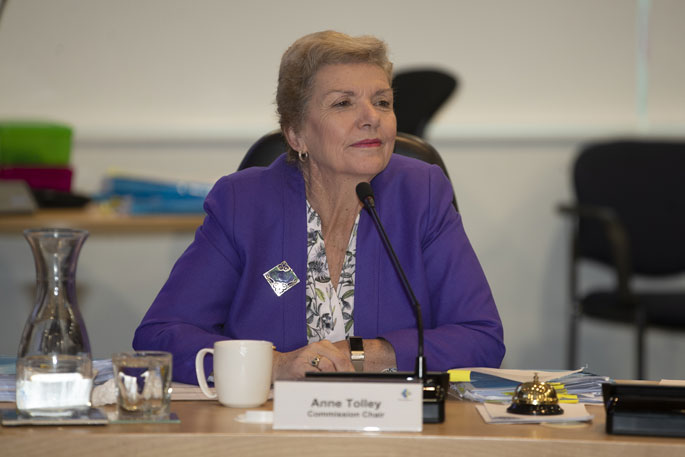 “We turn on the water and we flush the toilet and we don’t think anything of it, but when you see stuff happening in the community that everyone has been talking about needing, then you feel like council is actually listening to you,” she explains.

“Hopefully, we see a bit more of that over the time we are here and that people have confidence that we made the right decisions.”

The TRA march was led by steering group members such as Williams, the executive director of the New Zealand Taxpayers’ Union, Dawn Kiddie and Andrew Hollis, the pair former elected Councillors before the Commission was implemented in February, among others.

Speaking at the Council meeting at which the LTP was formally adopted, Williams says he was witnessing “with sadness” the events in Tauranga. 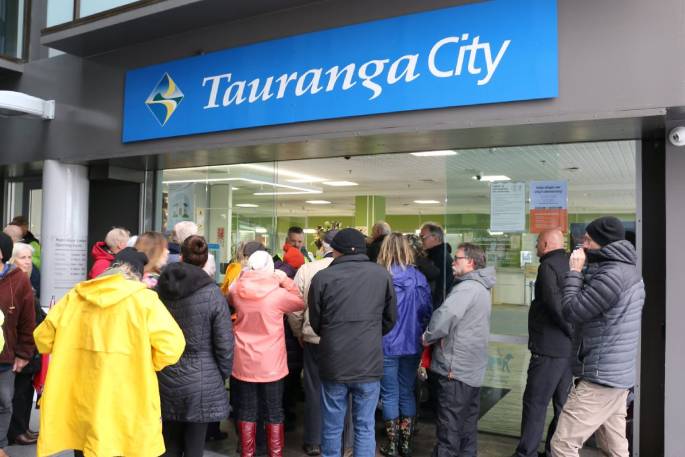 He suggests democracy has been parked outside the Council buildings since the Commission was installed by Mahuta, following dysfunction amid elected Councillors and former Mayor Tenby Powell.

“The billboards around the town say that the councillors are listening but the message from the hundreds of people that have turned up in the pouring rain today would certainly suggest otherwise,” he says.

He highlighted what he called “elephants in the room” regarding the LTP and the Commissioners presence, pouring scorn on claims infrastructure is poor due to previously low rates, what he calls a looming “debt monster” and a perceived lack of democracy.

“Fundamentally, the people downstairs and protesting in front of council today, they want their city back,” he says.

“We want democracy back.

“We never said democracy picks the best people but we would much rather incompetent democratically elected politicians that we can kick out than incompetent unaccountable people that won’t even front to hundreds of people directly outside the council chambers today,” he concludes, to a ripple of applause from the 50 odd protestors who filled Council chambers’ public gallery.

Kiddie and Hollis meanwhile address the crowd still outside chambers. Chants of “Two, four, six, eight, we want fairer rates” and “tell the council one, two, three, we don't want your LTP" permeate, along with the niggling sound of vuvuzelas, which were audible from Council chambers.

Kiddie’s emotional message over a megaphone speaks of genuine concern for those closest to her, as she also thanks the protestors for braving the poor weather.

“We are here because we are a community,” she says. “Our friends, our whānau.

“Because at this rate, we are going to be rated out of our homes.

“I am here, not because I am a disgruntled councillor but because I pay rates, I pay taxes”.

Hollis also tows a line of rates when addressing the crowd.

“It is about fair rating,” he booms. “What we have got now is unfair rating and it is going to be for about 10 years,” he says.

“I don’t know how you feel about that but it annoys the crap out of me.” 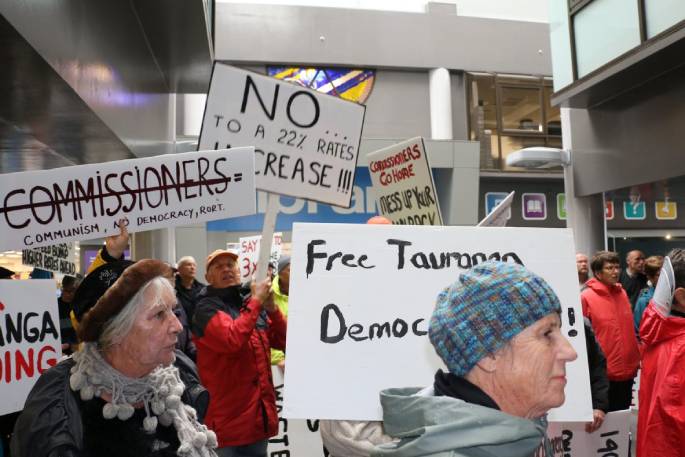 Amid the protestors there are clearly two messages. The rates rise is one of them. To those on fixed income, such as pensioners, it could have a big impact.

“We are here because we object to maybe having to sell our house and pay these sky high rates,” says Tauranga resident Joan Gooch when asked why she is at the protest.

But the other clear concern regards democracy. For many, the decision to install the commission earlier this year still irks and there is a level of distrust aimed both locally and nationally.

“I am also very concerned about the lack of democracy now in this lovely city,” says Joan.

“Democracy should rule,” he says. “It should not be dictated. Especially from people who are overpaid and have no idea what it is like to have to budget week by week.”

Many of the signs and placards also make reference to the collapse of democracy, although some of the anti-communistic imagery, admittedly from a minority, seems out of place and detracts from serious concerns.

Tolley’s hope is to begin delivering on the LTP to show ratepayers are getting value for their increased rates expenditure. As for the protests, she concedes that developing a plan to take Tauranga forward was never going to find universal approval.

“You don’t expect to please everyone,” she admits.

“I’ve had a long time in politics and you never go out there thinking you are going to get a 100 per cent.

“There would be something wrong if everyone agrees actually because we don’t all think alike and we don’t all want the same things.”

I don’t know were you get Tauranga had been cheap rates for to long. When moving here our Tauranga rates are more than Auckland and with additional charges on top too. Also services not as good as our water pressure was so bad it was close to and below the minimum .

That’s it! You hit it perfectly on the head. The commissioners need to step outside their $1800 a day world. They don’t recognize ’uncomfortable’ or ’struggles’. They have the mighty $ to do what they want when they want and as comfortably as they want. They aren’t living in or understanding 98% of Tauranga’s tax payers reality. They don’t have any comprehension of it. An_alias - brilliant comment.

So much monkey business has occurred before this appointed council that the list is endless. The failed projects and sky high bid estimates were part of the signs that someone was profiteering. It’s that or we had absolutely the worst elected council ever. There should be a forensic investigation. Until then just know that the appointee’s are medicine for a sick city or city employees.

We do not want higher rates with the "hope" that Tauranga Council will do right by the residents and ratepayers. If the council wants more money, we need to know exactly what we are getting, why and when, with follow through. Rates should be going down. We have more residents by thousands adding to your never ending pot Council and yet we still have little to show in the way of powerlines underground, safe and efficient roading and footpaths (and cycle lanes), pedestrian refuges & crossings, a decent rubbish recycling centre or any implementation of anything to help reduce crime including speeding and dangerous driving around the Bay of Plenty. We are crumbling and you; the Tauranga Council, are busy taking the people (who have no choice but to fund your errors and your lack of care of our communities with our precious finances) down with you!

Maybe we’d all have more respect for the Commissioners and Council if they could show what THEY have done to save money? Have we seen any attempts by Council to cut back? No, they are increasing their staff. Have any of the Commissioners agreed to take a pay cut? No, they gladly snuffle up the obscene fees they are being paid. How do they get away with it? Because they can, and because minister Mahuta loves jobs for the party faithful. I give these people NO credibility as long as they have snouts in the trough and NO attempt to lead by example.

What a comment. So Western Bay is being ripped off even more than Tauranga, therefore you want Tauranga to be ripped off more too? It seems that you want everyone to be torn down to the lowest common denominator, just like our current government and our commission?

The Labour rubber stampers can’t see why they cant spend other peoples money without remorse, heck they dont have to pay the rates. Do we need $700M on sports facilities, is that really essential when everyone is struggling ? Come on Tolley step outside the $1800 a day world

No one likes to have to pay more for rates, any increase hurts the pocket here in $10 Tauranga. But 2Up is correct, we are reaping the rewards of previous Councils that were afraid of this kind of reaction in the past. So now we have a broken city that’s not coping with growth, traffic and aging infrastructure. To be able to turn on a tap and get safe drinking water and flush the loo which all disappears to be highly purified to be able to return to the environment, to have nice parks, street lighting, roading, and all the other comforts provided, I think we get a pretty good deal. The previous Councilors proved they weren’t capable of being democratic, and the way in which we "elect" people to run our cities is problematic as anyone with a catchy promo can get in!

Agree with 2up. It’s about time Tauranga paid the same as their cousins in the Western Bay. WB have had the highest or nearly the highest rates for years......and we get even less for the money than Tauranga.

Only an idiot would keep pouring water into a broken bucket.

About time they went up

Tauranga rates have been too cheap for far too long. No wonder nothing gets done and dept. is spiraling out of control

the smile on her face says it all. i will tell you what is good for you

are Anne and her cronies on? Slim Shady is right, a huge dollop of patronising crap. How much more of this do we have to take?

It’s inevitable that some costs increase but what really annoys me is the priorities. They talk about huge spending on non essential and nice to haves in the same breath as essential services like we are expected to fund it all. Now also 21 more jobs to a council that appears a typical bureaucracy and already overstaffed. The government interference in democratic process and talk of taking rate payers council water assets by legislative theft . So far the government is talking all spin and it seriously under delivers in every area.

20% Rates increases served with a huge dollop of patronising crap.

Wouldn’t know Communism if it smacked them in the face.