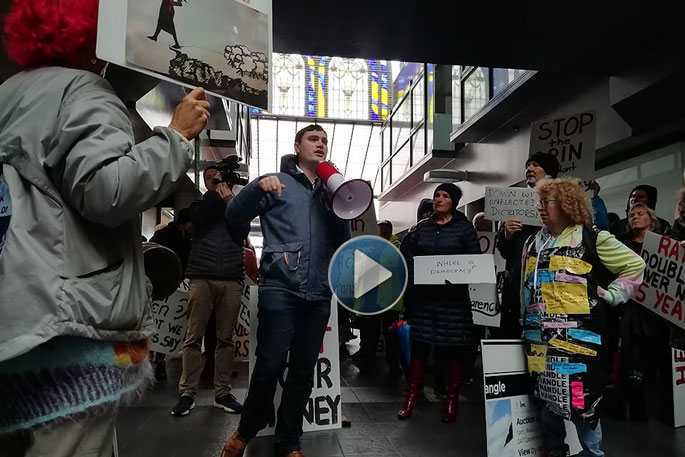 UPDATE 12.56PM: Hundreds of Tauranga ratepayers have descended upon council chambers this afternoon to protest their opposition to a proposed rates increase.

A rates rise is being proposed in Tauranga City Council's Long Term Plan, which is set to be finalised at the chambers on Willow Street from 1.30pm.

Some residents could be facing a 17 per cent increase.

That figure has drawn ire from the Tauranga Ratepayers Alliance, a group which among its steering group contains several Councillors who were replaced by the current Commission chaired by Anne Tolley in February. 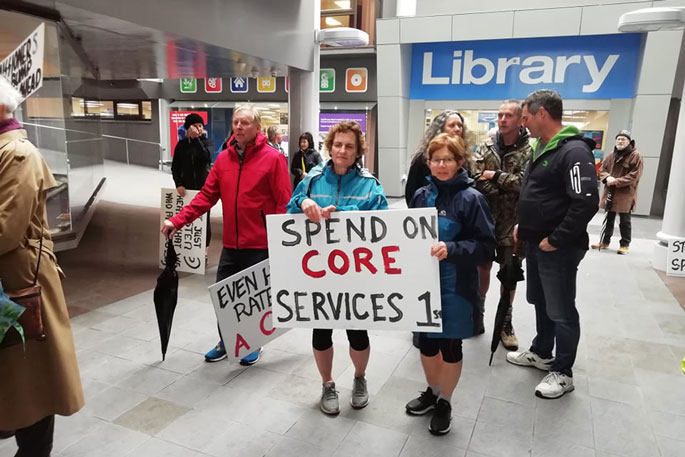 People protesting the proposed rates increase ahead of the 1.30pm council meeting. 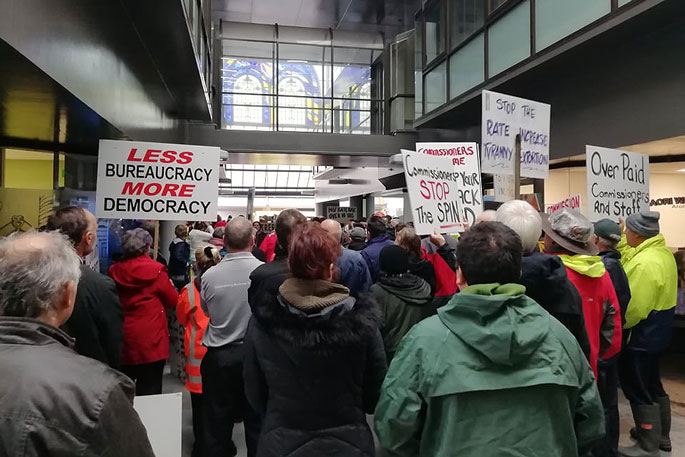 Susan Hodkinson has lived in Mount Maunganui since 1958 and services her community by regularly cleaning up the streets in the Blake Park area.

She believes that Tauranga City Council do not think in “systems” and until they have reviewed their working processes she is not happy with a rise in the rates she pays.

“It is just not sustainable,” she says.

“I do not want to pay any more rates until they start looking at their systems in place.”

Susan has many grievances, including rubbish bins, public toilets and a perceived lack of consultation.

“I don’t want to pay extra rates for new infrastructure, I want them to fix up the issues already in place.” 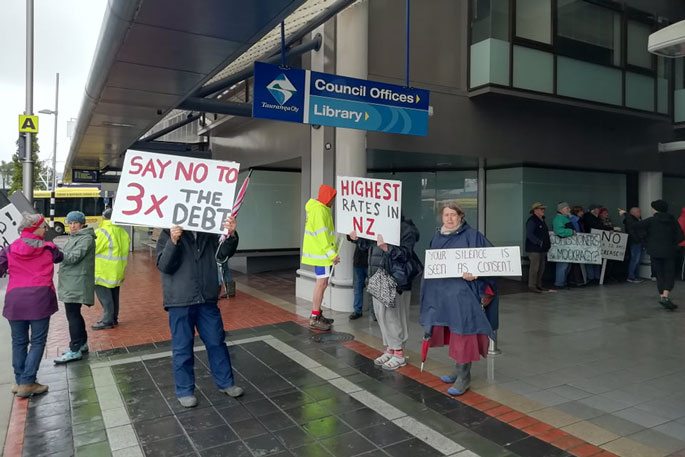 The TRA plan to march on Council buildings from 12.30pm and will speak in the opening session of today’s scheduled Council meeting public forum.

Jordan Williams, executive director of the Taxpayers Union and a member of the TRA steering group will speak on their behalf.

Disgruntled Tauranga residents will march on the Tauranga City Council building today protesting against rates rises set to be adopted in the Long-term Plan.

The LTP is set to be finalised at 1.30pm and some residents can expect a 17 per cent increase in rates in the first year.

That figure has drawn ire from the Tauranga Ratepayers Alliance, a group which among its steering group contains several Councillors who were replaced by the current Commission chaired by Anne Tolley in February.

“Such an agenda can only be driven by Wellington; it would be unfair to suggest that four unelected commissioners – with limited local knowledge and financial strength – have, with only six months’ preparation, unilaterally decided to impose such an extreme plan upon the city.

“The Long Term Plan as presented is a clear example of the Government seeking central control over Tauranga and its future, much like its three waters reform agenda. The consultation risks being seen as a meaningless token gesture.

“Tauranga residents deserve more. At the very least, they deserve a voice in the future of their city and in the costs and debt they will bear.

“Most importantly, they deserve a return to democracy.”

what people are moaning about is what i stood for when put my hand up twice, but failed to get votes, go figure

At the next GENERAL ELECTION people need to remember what and who caused the loss of our democratically elected councillors.

The small group that are protesting is full of the people that caused this mess. Even better, while the commissioners are voting on a direction that the people of Tauranga voted for 3 to 1. These ex-councilors still people that they are the only voice that matters. The voice of the kens and Karen’s of Tauranga.

Sorry they didn't take any notice at all

Seems they forged on with not even batting an eyelid. So much for listening .

Waste of time standing in the rain shouting and touting signs. They’ve already made up their minds and will be sitting in their air conditioned chamber with their tea and Lattes and smorgasbord morning tea considering their next fat cash payday.

I don’t believe Tauranga do have the highest rates in NZ. Carterton, Auckland, Tasman and even the Western Bay of Plenty pay higher rates than Tauranga. Nevertheless, the increase being imposed by TCC is scandalous. How about charging higher rates to those who are going to be building in the area and who are going to be putting more strain on the infrastructure? Most residents who have lived in the region for years have not asked for the intense increase in population and certainly don’t want to pay lots more in rates.

Very poor turnout. Funny that almost all left after the Taxpayer Union guy gave his meaningless speech, and before the Commissioners and staff explained and voted on the Long Term Plan! And these are worried about a loss of democracy? Yeah right. The Commissioners are doing a great job, with more democracy than we have seen in more than a decade. Ratepayer Alliance? Huge fail in my eyes.

Placard of the day?

A great turnout despite the weather. 17% Rates increase is absurd. Bring back elected Councillors.

At the next council elections people need to remember what and who caused the lose of our democratically elected councillors.

Wish I could be there

Getting into town has become a major exercise and the bad weather has made it a stel to far for me today. So hope enough brave souls make the journey and make their presence noted. Sadly I think the bureaucracy of council staff and commissioners will continue on with their policies regardless without much heed for ratepayers who are just to be milked

you can protest and march till the cows come home. won’t make the slightest bit of difference. these councilors and comminisors have already made up their minds

Unlucky, I don’t see much of a turnout. But, I’m behind them! My rates are sky high.