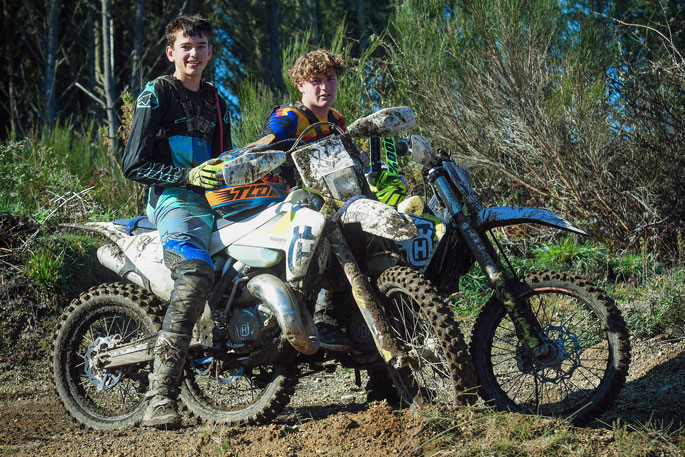 It's two down and one to go for Sam Parker, now standing alone as the sole unbeaten rider in this year's Dirt Guide Cross-country Series.

The 15-year-old from New Plymouth, still dealing with grief following the passing of his grandfather during the week, showed courage and strength to battle on and win the 90-minute junior race at the second round of three in the series near Tokoroa on Saturday.

The Husqvarna TC150 rider had kicked off his campaign with an impressive win in his grade at round one last month and, although his job on Saturday was made extremely difficult by on-form Whangamata rider Ethan Jameson, tenacious fellow New Plymouth rider Blake Lusk and talented Rotorua rider Harrison McClintock, it was Parker who prevailed again.

This made it two wins in a row for Parker, while Jameson rode his Husqvarna FC250 to eventually finish runner-up, making it a Husqvarna 1-2 result, and it sets up the competition for a thrilling final showdown at the same venue, in forestry at Ohakuri, about halfway between Tokoroa and Taupo, next month.

Parker now leads the junior 12-15 years' grade by eight points from McClintock, with Jameson, Taupo's Josh Yeoman and Lusk rounding out the top five in the standings.

"It was good, tight racing and it feels pretty good to make it two wins in a row," says Parker.

"I was behind Ethan (Jameson) and slowly catching him, but not fast enough and, if he hadn't made a small mistake near the end, I probably wouldn't have got him. I was a bit lucky really.

"I could see him ahead of me about halfway through the (sixth and final 13-kilometre) lap, and was pushing hard, then he crashed near the end of the lap and I managed to sneak past him for the win."

Jameson, also aged 15, was philosophical at the end.

"I had the lead for quite a bit of the race, but then I tried to pass a lapped rider and lost control in the logs and Sam passed me. It was only about 10 or 15 seconds from the finish. That was pretty frustrating, but that's racing I suppose."

Meanwhile, Taupo's Hadleigh Knight, won the two-hour senior race later in the day, that result also earning him the overall series lead. Round one winner James Scott, from Oparau, was a no-show on Saturday, as international duties have called him away to race in Europe.

More than 190 elite riders lined up to race the opening round of the Dirt Guide Cross-country Series on June 26 and that figure was massively exceeded at round two on Saturday – with more than 240 individuals showing up to race – a testament to the quality and growing popularity of the series, organised by legendary former Kiwi international and Motorcycling New Zealand Hall of Famer Sean Clarke, from Tokoroa.

The third and final round of the series is set for August 21, also at the popular Ohakuri venue.