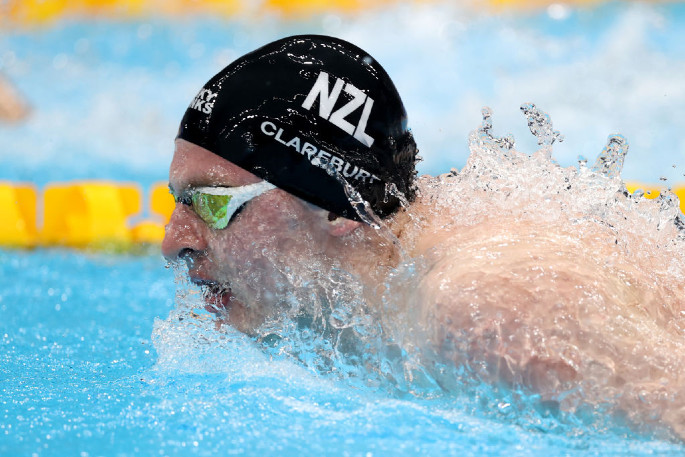 Lewis recently broke his personal record by more than two seconds when he swam 4min 09.87s at the national championships. To go so much faster again and in a heat at that, emphasises his ability.

Afterwards Lewis rated his performance at just 2 out of 10, explaining he feels he has a lot more in the tank.

“I was happy with that,” says Lewis. “I thought I went out a bit slow, but I stuck to it in the breaststroke and then had enough to come back at those guys in the freestyle. It’s nice to get the first race over and done with.”

Though no swimmer even approached the 2008 world record of human fish Michael Phelps (4min 03.84s), Lewis certainly looked as good as any swimmer in this event – his favourite - in Tokyo and his steep graph of improvement is hugely encouraging.

Taranaki 21-year-old Zac Reid was the other New Zealander in action tonight, in the 400m freestyle heats, but was unable to progress to the final.

Zac, whose entry time was 3min 47.74s, managed just 3min 49.85s for sixth place in his heat. He began swiftly, but was unable to hang on to the pace and eventually finished 23rd fastest overall of the 36 starters in the 400m freestyle. The fastest qualifier was Germany Henning Muhlleitner with 3min 43.67s.

Zac was unable to put his finger on what had gone wrong.

“I was in a good head space before the race, but that swim wasn’t what I was aiming for. It was a pretty hard race, but if I’d swum my best I’d have been up there. I just didn’t click," says Zac. 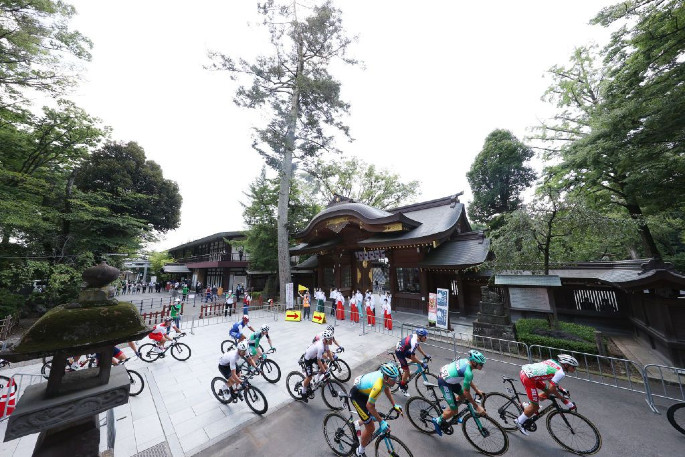 New Zealander George Bennett turned in a brave performance in the gruelling Olympic men’s cycling road race, but was unable to get among the leading finishers.

The 31-year-old, noted for his climbing ability, was well-placed and looked strong for much of the journey, but missed out on a crucial break about 25km from the finish and was consigned to riding home in a chasing bunch.

The race was won by Ecuadorian Richard Carapaz in 6min 05.26s from Wout van Aert of Belgium and 2019 and 2020 Tour de France winner Todej Podacar of Slovenia. George finished 6min 20s behind Richard.

A tired George was disappointed he’d missed out on the breakaway group.

“It was a tough day,” says George. “It happens. I just got squeezed at the bottom of the climb and then the gap opened. I was dangling on the back and just couldn’t make the front group.

“It’s disappointing, but it’s a bike race. Unfortunately it’s a really big one.”

He said the riders didn’t break up as much as he had expected at the start. “It was a lot bigger group coming into the last climb and it was far more explosive than I thought. I felt it was going to be more like a mountain day and then it turned into a real sort of classic race - it was super hard.”

The steamy conditions and challenging hills in the last half of the race were too much for many riders and 42 never finished the race, including the other New Zealand starter, Patrick Bevin, who pulled out at about halfway. 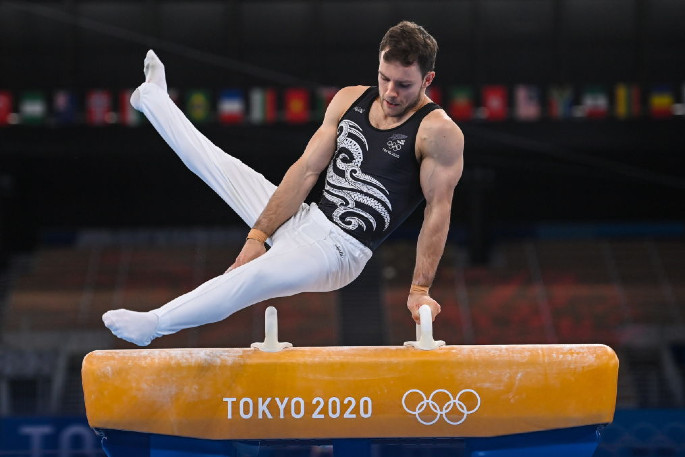 Mikhail Koudinov satisfied with his showing

Mikhail Koudinov was generally satisfied with his performance in the all-round section of the Olympic gymnastics competition.

Mikhail, though only 30, represented New Zealand as long ago as the 2006 Melbourne Commonwealth Games, and used that experience well in Tokyo.

A poor landing and an erratic routine meant he recorded only 11.366 and so finished with a total of 78.064, which placed him 15th of the 43 who started in his subdivision.

There are three subdivisions and only the top 24 overall progress to the final, so Mikhail said that realistically his chances of advancing were slight. The winner of his subdivision was Russian Nikita Nagornyy, who totalled 87.897.

“I was pleased overall,” says the New Zealander. “I was quite nervous on the floor, the first event, but I stuck my first tumble, and after that I felt much better.

“For the first five disciplines I feel I did everything I am capable of. The two I can have more trouble are the parallel bar and the high bar.

“On the high bar I suddenly began to feel exhausted partway through. The whole day was catching up with me. I dropped one of my skills and then I had the bad landing, which would have cost me a whole mark.”

He says that with two disciplines remaining he thought he was still in with a chance of making the final, but at an Olympics there is no room for even one bad error.

Mikhail had intended retiring from gymnastics several years ago but, perhaps heartened by his showing in Tokyo, is now thinking of farewelling the sport at the next Commonwealth Games, in Birmingham. 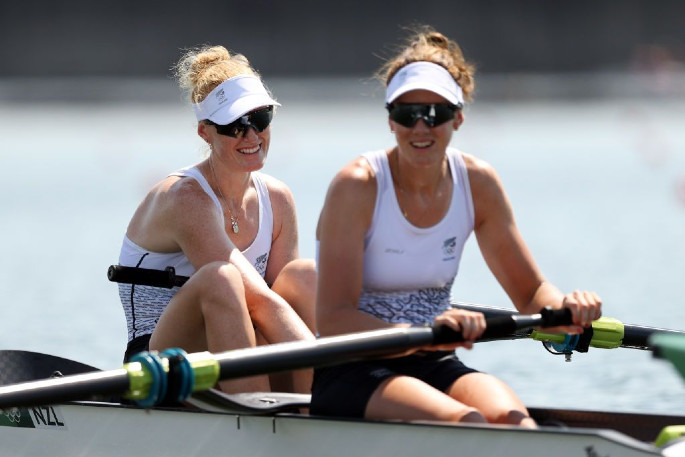 New Zealand again got the business done during the second session of Olympic rowing heats.
There were four New Zealand crews in action and three of them progressed satisfactorily, leaving just the men’s eight consigned to the repechage route.

Current world champions Grace Prendergast and Kerri Gowler outclassed the field in their heat of the women’s pairs, winning easing up in 7min 19.08s from Denmark and Spain. They move into the semi-finals having already served notice they are one of the form teams.

In the men’s pair, Brook Robertson and Stephen Jones qualified for the semi-finals by finishing third in their heat in 6min 56.53s, though they were some distance behind Australia and Italy.

Brook and Stephen have a New Zealand reputation to uphold in this event, which was dominated for the best part of a decade by the incomparable Hamish Bond-Eric Murray combination.

Brook and Stephen say they took a while to get used into the racing groove.

“It’s our first race as a pair this year,” says Brook. “It felt quite strange and we were a little bit shellshocked at the start, but we did enough to qualify. We have a lot more to give.”

At home the pair have been training with the rest of the New Zealand rowing squad, lining up in handicapped events against various crews, but have not had full competitive races.

Brook says racing against other crews gave the performance more edge and now it was just a matter of getting used to the extra intensity.

The New Zealand women’s eight won a thrilling battle with Canada to take their heat and so advance to the final – only one team from each of the two eights races gained automatic qualification for the final. The New Zealanders – Ella Greenslade, Emma Dyke, Lucy Spoors, Kelsey Bevan, Grace Prendergast, Kerri Gowler, Beth Ross, Jackie Gowler, Caleb Shepherd (cox) -  trailed for more than three-quarters of the race, but lifted their tempo in the closing stages and won in 6min 07.65s, just ahead of Canada, 6min 07.97s. China and Great Britain were further back. Prendergast and Kerri Gowler were having their second race of the day. 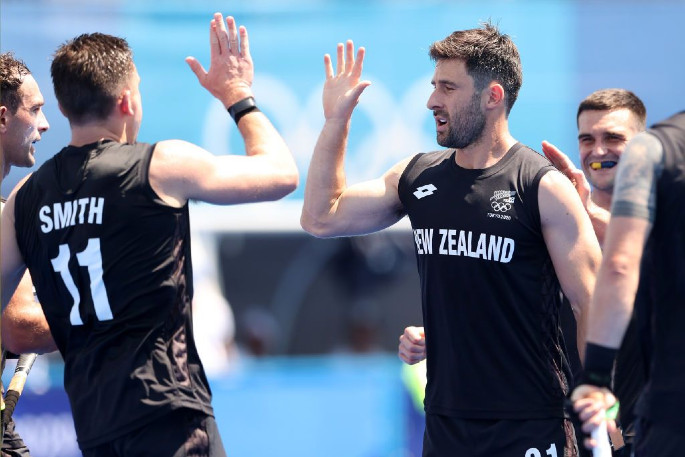 The New Zealand men’s hockey team were disappointed to open their Olympic bid with a narrow 3-2 defeat at the hands of India.

Things went well for captain Blair Tarrant and his team early on and in the sixth minute Kane Russell converted from a penalty corner to put the New Zealanders ahead 1-0. But over the next 23 minutes, India scored three times, first by Rupinder Singh following a penalty stroke, and then twice by India captain Harmanpreet Singh.

Stephen Jenness gave the New Zealanders hope with a goal in the 43rd minute, but that’s how the score remained.

New Zealand attacked strongly in the closing stages and it required two outstanding saves by India goalie Sreejesh Parattu to prevent the scores being levelled.

New Zealand must be considered unlucky not to have grabbed at least a draw. They had less than impressive warm-up form before this tournament, but when it counted today they strung their attacks together much better, despite the strength-sapping heat.

Overall New Zealand manufactured 14 shots at goal, three more than India. They earned 10 penalty strokes to India’s 5 and shaded the Indians for possession.

Afterwards Blair was understandably disappointed with the result.

“We lost the battle of the penalty corners, and that was always going to be a crucial area,” says Blair.

“We finished strongly, but we need to begin better and put more scoreboard pressure on the opposition.”

The game was marred by several very long stoppages near the end due mainly to Indian referrals and Blair felt that despite the heat, his players were finishing well and that the stoppages worked against his team.

New Zealand’s next match is against Spain today. 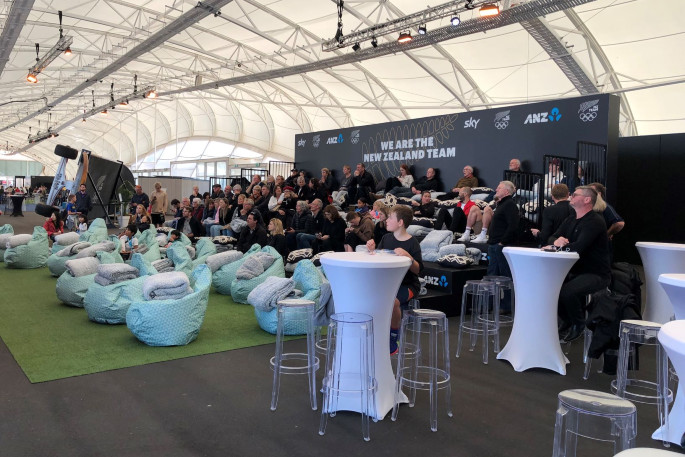 New Zealand Team fans showed up in force at the New Zealand Team NZHQ this morning to support our Rowing team as they competed at the Tokyo Olympic Games, among them Robbie Manson, rower and Olympian.

Robbie competed in the 2012 London Olympic Games and the 2016 Rio Olympic Games, and this morning was at NZHQ to support his rowing peers in Tokyo.

From the NZHQ grandstand, he admits it’s less stressful being a spectator.

“It’s nice being here surrounded by other friends, family, parents and supporters.”

Reflecting on his own Games experience, he said his family would always be on the ground with him to watch and cheer him on.

With friends and family are not permitted to be in Tokyo supporting their loved ones this year, Robbie’s glad there’s a place for them to come together in New Zealand.

“It’s really cool, the parents enjoy being around each other,” says Robbie.

“They can celebrate together – and commiserate together depending on how the crew’s going – and be there to support each other.”

But NZHQ is not just for friends and family of the New Zealand Team, it’s a place for supporters of all ages to share in the excitement of the Olympic Games.

“There’s lots of fun and interactive things to do,” says Robbie.

“It’s a shame we can’t all be there with the athletes but it’s nice we can all be here together to support them.”

From NZHQ, Robbie wishes the New Zealand Team all the best.