Pets Aid therapy for those in need 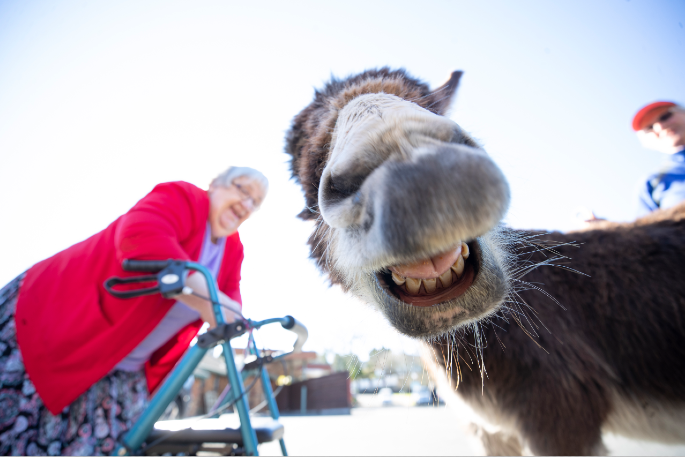 Anne Thomson got to hang out with Dumbledore the donkey at Radius Life Care Matua. Photo: John Borren.

Dumbledore and his girlfriend Tonks were welcomed by almost 60 residents when they arrived at the retirement village last week, and soon became the stars of the show.

Other members involve Doc, a black Labrador, Violet, a Flemish Giant rabbit, Studley the guinea pig and his ‘wife’ Spike.

Pets Aid Therapy founder, Helen Davies, launched the organisation as a way of sharing her passion for animals, great and small, with others.

“When my sons were at kindergarten and primary school, I found my two little ponies and a variety of small pets were incredibly popular with the children, their parents and their grandparents,” says Helen.

“Many urban families do not have access to animals and pets, and I personally feel this is essential for human development and happiness.

“I found the most fulfilling experiences were with those people who had a real need for the interactions, so Pets Aid Therapy Bay of Plenty became my next project.

“Pets Aid Therapy allows interactions with various animals in a safe and compassionate manner at many different venues.” 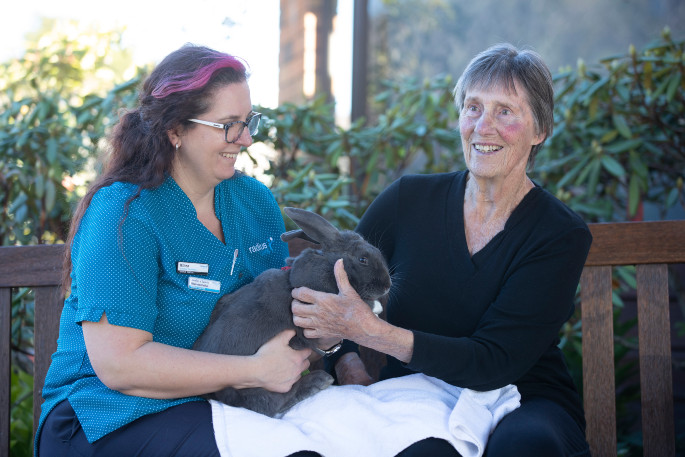 “I’m very fond of animals and had cats growing up,” says Anne. “It was difficult with my walker, but I got to pat the donkeys.”

Anne, who has been a resident at the retirement facility for 16 months, says the initiative is good for those who are feeling lonely.

Matua Radius Life Care diversional therapist Klara Luxford-Rulisek says she jumped at the opportunity to have the Pets Aid Therapy team come and visit for the day.

“Petting a donkey may bring up past memories of riding horses,” says Klara. “Having the chance to put their hands on a rabbit and pet the warm fur is also good for tactile movements.

“It’s a talking point, and gets them excited about something. They’ll be telling their families and talking about this for months.”

Anne Thomson got to hang out with Dumbledore the donkey at Radius Life Care Matua last week. Photo: John Borren.

Close friend and neighbour of Helen, Jill Sweeney, who has a nursing background from living in the UK, says Pets Aid Therapy is about the benefits of being in contact with an animal.

“When we’re happy, our body releases hormones and these hormones counteract the stress hormone, so the end result is that we feel happier,” she explains.

“And in this day and age, those hormones are all about our mental wellbeing.

“As I’ve grown older, I’ve become more aware of the stresses our western culture and busy lifestyle places on us.

“Many individuals are unable to cope, and the endorphins released when seeing, touching, holding or interacting with animals provides great relief.

“Being around an animal brings subtle changes in our hormones - reduced cortisol, the stress inducing hormone, lower blood pressure, raised levels of serotonin and dopamine, the ‘feel good’ hormones.

“Much has been written over the years, some anecdotal, some more factual. However, if the end result is a person feels less anxious and has an improved mood, their wellbeing and therefore mental health has benefited.

“Say you’ve been bedridden for months and suddenly there’s an animal, a non-judgemental being just exuding this calm and peace.

“I’ve actually witnessed a gentleman with Alzheimer’s who was so distraught and disorientated that he didn’t know where he was and hadn’t recognised his wife for several years.

“We went to visit and he stroked a donkey. In his world he was back to when he was 20, surrounded by his herd of cattle. And the smile on his face … he was beaming.

“His wife had tears of joy running down her face, and she said ‘I haven’t seen that smile for many years.’”