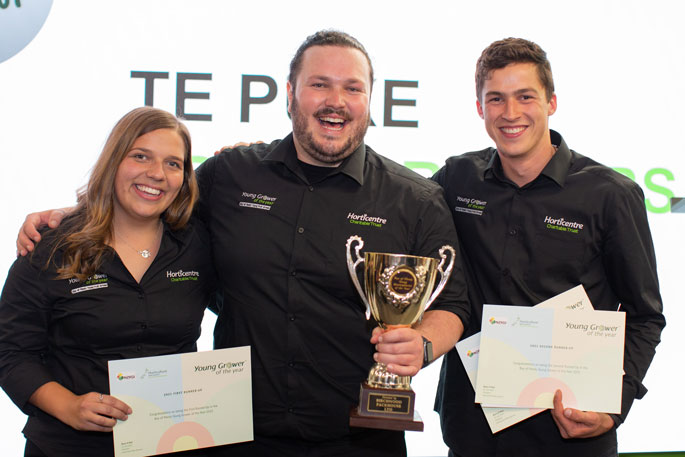 A Grower Services Representative at Opotiki Packing and Coolstorage (Seeka), has been named Bay of Plenty’s Young Grower for 2021.

Bryce Morrison was named the winner at an awards dinner in Tauranga.

The competition took place on Thursday at Mount Maunganui College, where eight competitors tested their skills and ability to run a successful orchard in a series of challenges.

These were followed by a speech competition discussing “What are the important lessons we have learnt from Covid that could be implemented for future years”, at a gala dinner last night.

Bryce excelled in individual challenges, and impressed judges with his speech on Covid. Emily Woods came in second place, while Quintin Swanepoel was third.

Bryce’s prize includes an all-expenses paid trip to Wellington to compete for the title of National Young Grower of the Year 2021, in August, as well as $1,500 cash.

Bryce comes from Christchurch, where he also completed his Horticultural Management studies at Lincoln University.

After spending four years in the industry with Fruition Horticulture, 28-year-old Bryce has recently embarked on a new journey with Seeka, joining their grower services team.

Bryce feels he brings a fresh energy to the industry and likes to tackle problems with new ideas and technical solutions.

One of Bryce’s major achievements includes the Gold Futures and Cut it Out projects, which helped the industry better understand and manage Psa.

Beyond work, Bryce loves spending time outdoors. Always hopping on board for industry events, this was Bryce’s second time competing in the Young Grower of the Year competition.

BOP Young Growers chair Erin Atkinson says the calibre of this years’ contestants has made the 2021 event special.

“The contests of this year’s BOP Young Grower competition have shown great potential for strong careers in the horticulture industry,” says Erin.

“The competition is the perfect environment to put their knowledge on display and it’s reassuring that we have such young talent coming through our industry.”

New Zealand Kiwifruit Growers Inc. CEO Colin Bond agrees, and says these competitions are important to highlight the skills and careers associated with the horticulture industry.

“Horticulture is undergoing rapid change in areas such as regulation and the make-up of the labour force,” says Colin.

“It is critical that we have skilled talent with careers in the industry to lead a pathway forward. The 2021 BOP Young Grower competition is an illustration of not only the careers available, but that some of our young and upcoming people will hold the industry in good stead.”

Bryce will go on to compete in the national Young Grower of the Year competition, run by Horticulture New Zealand. The national finals will put the regional finalists to the test.

A series of business and practical modules will test their horticultural skills, business knowledge, leadership abilities, and oratory talents.

Bryce will compete for the national title of Young Grower 2021 with the winners from other regions.