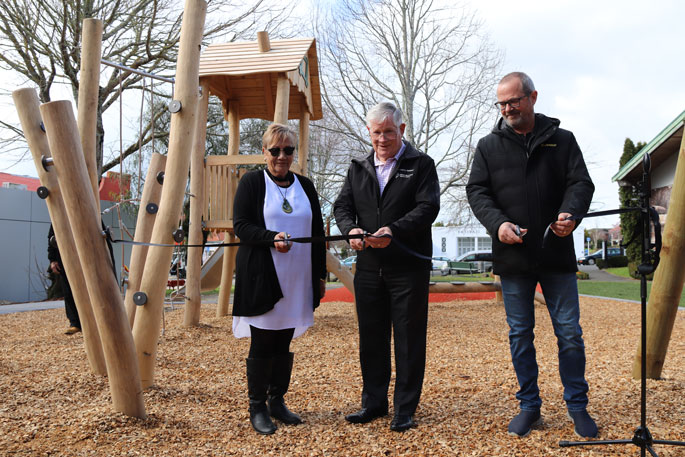 Western Bay of Plenty Mayor Garry Webber cut the ribbon along with Hineira Jacob and Avoco Director Alistair Young, during a small event for stakeholders and community leaders on Thursday.

The playground also pays homage to Katikati’s claim as the avocado capital of New Zealand, with an avocado motif on the artificial turf surrounding the trampoline.

“Playgrounds are great for the whole community because they bring people together, and we’re proud to have installed new features that make this playground more inclusive and accessible,” says Webber.

“The kids of Katikati will be able to enjoy this new equipment for many years to come.”

Promotions agency Katch Katikati initiated the playground revamp, working closely with Council to replace the existing equipment a little ahead of schedule.

Jacqui Knight of Katch Katikati says the playground has been a much loved community asset and this upgrade will see more families in Katikati town centre.

“We’re thrilled to see this playground updated, it’s a vital asset in our town centre and one our families will treasure.”

The new facilities were funded through a mix of existing asset renewal funding and sponsorship from local company AVOCO, one of New Zealand avocado industry's leading export supply group.

The playground is located in the centre of Katikati across from the arts junction and Western Bay Museum.

The new equipment was supplied and installed by Hamilton-based company Playground Creations.