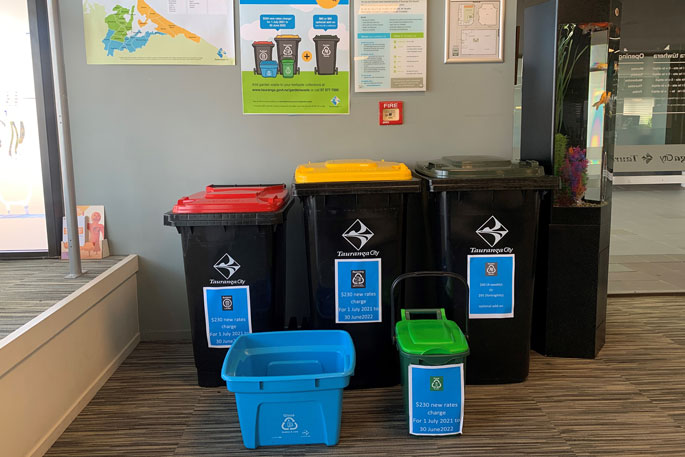 The new bins which were delivered at the start of the month. Photo. Rosalie Liddle Crawford.

Both Tauranga City Council and Western Bay of Plenty District Council suggest the fitting of bins with radio frequency technology has future-proofed the rollout.

The councils implemented their new kerbside collection service across the area at the start of the month.

The new bins, which have received a mixed reaction from the community, are fitted with radio frequency identification, known as RFID tags.

Tauranga City Council highlight the fact the bins are now prepared for any future changes to a pay-by-weight system, should the community want that change.

“We now have the option to switch to a pay-by-weight system when the technology becomes available.”

WBOPDC also confirm the implementation of the RFID’s gives them scope for changes going forward.

“In the future we may be able to use this technology to assist with charging for refuse collection and disposal,” says WBOPDC deputy CEO and group manager infrastructure services, Gary Allis.

The tagging system will also help prevent the loss or theft of any bins.

“Currently, our bins have RFID tags coded with the address they are assigned to,” says Gary.

“This will assist us with locating lost or stolen bins as the tag is scanned each time it is lifted.

TCC also confirm the RFID’s main purpose will be to ensure the bins are not going missing as the key reason behind the RFID system being utilised.

“With an operation of this size, we need to keep track of bins in the community and identify lost or stolen bins,” says Sam.

“That’s why we have fitted all council kerbside bins with a radio frequency identification tag.”

Other rollouts of bins with similar RFID tags installed across the country have caused some controversy.

As reported by RNZ, implementation of a similar scheme in the Hutt City Council area led to a small number of people taking to social media with varying conspiracy theories.

Such theories are also doing the rounds on social media throughout Tauranga, again, on a small scale.

One social media comment suggests it is “state control”.

“Why on earth does rubbish need to be tracked with radio frequency identification.”

But TCC point out the type of RFID being used in the area are in common use.

“It’s used in libraries, stores and even when microchipping our pets.”

Calm down and think about it. Removing the tags won’t do anything. It will simply bring the garbage police to your door. Leaving the untagged bins to be collected simply puts an eyesore outside your house as nobody will collect them. By all means, protest this really stupid and unnecessary scheme that was politically instigated and which we had no say over, but protest it sensibly. Many people agree with you.

Where on the bins are the RFID tags? Thanks

The bottom line is

That the ANNUAL CHARGE for all the bins should NEVER have been put in place!!! What we are now seeing is that the Council PLANNED the ability to charge on the basis of BINS/WEIGHT COLLECTED - with RFID tags installed on the bins from the start !! BUT are charging a weekly FLAT FEE !!! I suggest that ALL residents REMOVE the RFID tags from their bins and then leave their UNWANTED bins on the street 24/7 !!!

Nothing fair about it!

In our case, it will take around 8-10 weeks, probably more, before recycle/rubbish bins will be worth putting out. Our glass bin goes out about every 6-8 weeks. And there’s many like us. How are the charges fair on us?

“We now have the option to switch to a pay-by-weight system when the technology becomes available.” What nonsense - the technology to scan the RFID tags is long available. All it needs is to scan each time it is emptied. No paper tag buying required. You can be charged annually for how often your bin was emptied. Whether pay by weight (much more complicated) or pay by volume (bin size) a "pay as you throw" system was what the community wanted in the first place and no "one size fits all" as is installed now. It is high time that this "pay as you throw" system will be implemented!

Someone could dump a whole load of illegal narcotics or whatever into your bin and then what happens....RFID. It’s your problem now.

Gently gently.....then whallop!!! This will definitely happen because Council will see an opportunity to increase revenue. They are going to have to replace lost revenue collected through water, somehow, when we change to Three Waters. This has probably been the agenda all the way along. Like Slim Shady states, this will only encourage people to dump items in their neighbour’s bin. I live on a rural section so when Council decide to charge by the weight, I’ll increase the amount I burn, including materials that will give of toxic fumes........which will defeat the aim of Council and Government in trying to prevent the world from tilting more towards the sun and warming up, and more importantly, preventing the world from tilting back and freezing again, in the next million or so years.

I already have one neighbour that dumps in other people’s bins. It will just encourage more freeloading. Will have to stand guard with a big stick.