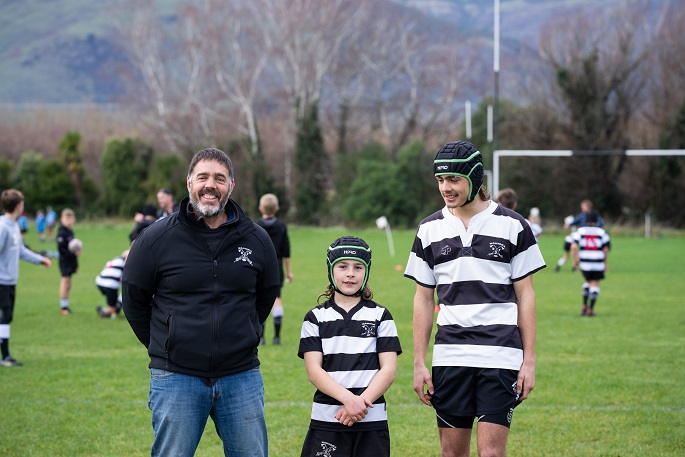 A new field trial investigating whether headgear can help prevent collision-related injuries in junior rugby players will kick off next year amid growing concern about health and safety in the sport.

University of Canterbury education, health and human development Professor Nick Draper has been awarded more than $100,000 by the Canterbury Medical Research Foundation to carry out a two-year study into head collisions in junior rugby and the potential of World Rugby-sanctioned head gear to reduce impacts.

Nick, who is an experienced junior rugby coach and a father of three young rugby-playing sons, says the study is timely given rising concern from parents and the rugby union community about the health risks associated with head collisions.

“There are parents who are choosing not to let their children play rugby as more concussion cases come to light, and I think as researchers and as a university, we have a responsibility to the community to find ways to make the game safer for our children,” says Nick.

“We recognise there’s a gap in the research relating to teenage rugby players in the important area of player safety.

“Rugby is our national game, it’s a contact sport and over three-quarters of our active rugby players are juniors, so the effect of concussion on children is a significant health issue.”

Nick has welcomed the CMRF grant, which will allow field trials to go ahead with two teams of male junior (under 16) players at the Waihora Rugby Club. A group of 40 players from the Club – which Nick’s three sons, aged 9, 13, and 15 also play for – will take part during two seasons in 2022 and 2023.

CMRF chair Geoff Cranko says the foundation is delighted to be able to support a project that could have such a fundamental impact on the health and well-being of young Cantabrians and the safe future of the game for all players.

Players taking part in the study can opt into one of two groups, one wearing World Rugby approved NPro headgear, and the other without headgear.

They will also wear special mouth guards equipped with sensors to measure peak accelerations that occur during collisions at training and in matches.

Collision events, which will also be videoed, will be recreated in the laboratory to assess their impact.

The trials will try to accurately assess the number and size of collisions in rugby and find out if wearing World Rugby approved headgear can reduce ‘peak acceleration’ collision forces.

MRI scans will be carried out on the player pre-season, post-season and after any concussive collision as part of the research.

Supported with an additional $30,000 grant from Pacific Radiology, the scans will help detect changes in the brain as a result of collisions.

Canterbury Rugby and Crusaders have both expressed their support for the research and say they look forward to Professor Draper’s findings.

“We fully support this study and any research that aims to further understand that area of the game.

“Rugby is continually looking at ways to create safer playing and training environments and gaining a better understanding of the role headgear might play is an important part of that.

“Having quantified research available to players, coaches, clubs, unions, and governing bodies to help inform their decisions is going to be really valuable.”

Crusaders chief executive Colin Mansbridge says “Professor Draper and his colleagues at the University of Canterbury have supported rugby with a number of studies around player safety and improvements in our high-performance programmes, so the Crusaders welcome this latest body of work.

“We look forward to seeing the results of this study in 2023.”

“If this headgear is something that helps keep kids playing for longer and keeps them safe, then we’re all for it.”

Nick says there’s potential to improve rugby headgear to make it smarter and more effective, but headgear is not the only measure that could potentially make the sport safer.

Using his background as a judo coach, he is also interested in whether teaching players how to fall in a way that controls and protects their heads may be helpful. He is collaborating with Otago University Associate Professor Melanie Bussey on a study to investigate this.

The CMRF is fundraising for Nick’s research at their annual Wine & Art dinner and auction on Saturday, October 16.