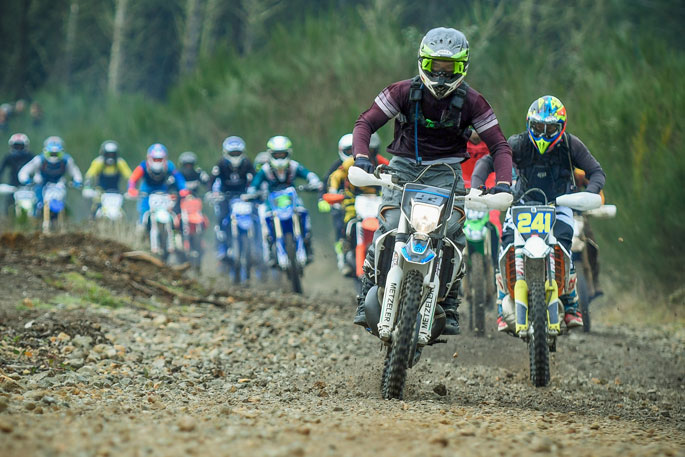 It's congestion at the start as the riders charge into the second corner at round one of the Dirt Guide Cross-country Series near Tokoroa last month. More of the same intensity can be expected this coming weekend. Photo by Andy McGechan, BikesportNZ.com

It's always a difficult sport to predict, but one thing is for certain, there will be a fresh winner at the second round of three in the popular Dirt Guide Cross-country Series this coming Saturday.

Oparau's James Scott took his Honda to win the series opener a month ago, but he has since been snapped up for duties by an international race team and so the teenager is therefore instead racing enduro events in various parts of Europe this month.

So, while the "cat" is away, the "mice" will play at Tokoroa this Saturday ... not that any of New Zealand's resident crop could truly be classified as mice.

With more than 130 elite riders lining up to race the opening round of the popular Dirt Guide Cross-country Series on June 26, in forestry at Ohakuri, about halfway between Tokoroa and Taupo, and a similar number of talented racers expected at round two at the same venue this Saturday too, it will be vital for any aspiring champion that he or she gets a great launch off the start line.

Scott was obviously among the leading bunch after a shotgun blast signalled the start at round one, but he had Helensville's Tom Buxton, Taupo's Hadleigh Knight, Wainuiomata's Jake Whitaker, Taupo's Wil Yeoman and Whitianga's Blake Wilkins, among others, for close company and it will possibly be one of these same individuals who will be favoured this time around too.

Palmerston North's Paul Whibley had a shocker start to his race at round one, but eventually clawed his way back through the packed field to finish fourth overall, so he'll no doubt be another rider worth watching out for this weekend.

The two-hour senior race is set to start at about midday.

In addition to the expert grade riders, the series caters also for junior riders and for intermediates, veterans, women and mini riders as well.

The juniors have their 90-minute race scheduled to start at about 9.30am on Saturday and riders to watch out for here include round one winner Sam Parker, from New Plymouth, Rotorua's Harrison McClintock, Taupo's Josh Yeoman, Whangamata's Ethan Jameson and New Plymouth's Blake Lusk.

The Dirt Guide Series can be anything a rider wants it to be ... a serious competition for New Zealand's elite dirt bike racers, a challenging afternoon's ride in the bush or just a leisurely cruise along pine needle-laden forest pathways.

It appeals to all-comers, but don't be fooled by the varied skill-level aspect of the series, because it is precisely events such as this that have created, inspired and nurtured Kiwi cross-country racing talent over the years before setting some of our brightest young talent on a pathway to top-level international competition ... just as what recently happened for this year's winner at round one, James Scott.

The third and final round of the series is set for August 21, also at the popular Ohakuri venue.