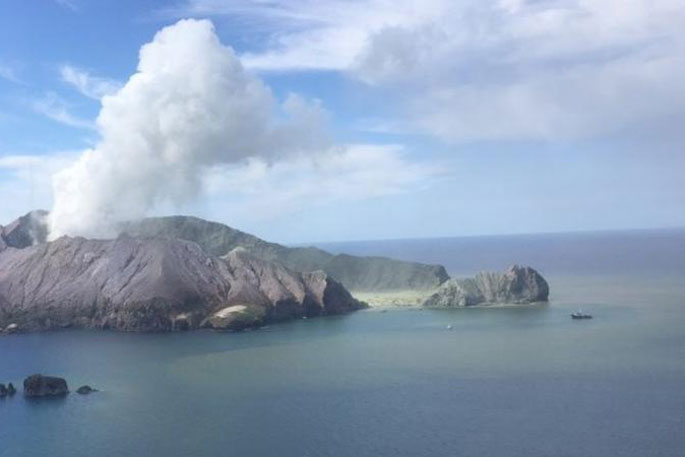 Whakaari/White Island tourism companies charged with breaching health and safety laws have received hundreds of thousands of dollars in public funding since the tragedy.

Twenty-two people died and at least a dozen others were critically injured after the explosion on December 9, 2019.

A week after the eruption, Prime Minister Jacinda Ardern announced a support package to help businesses recover from the economic shock.

Figures obtained by RNZ show White Island Tours, Volcanic Air and Kāhu NZ were given almost 90 percent of the $1.67 million the fund distributed.

They were under investigation at the time and are now among the 13 parties prosecuted by WorkSafe for alleged health and safety breaches leading up to the devastating blast.

A lawyer representing some of the Australian families has called the payments "absolutely unfair".

White Island Tours, which had brought 21 of the 22 deceased to the island, was paid the most from the support package - more than $870,000.

The operator also went on to receive $244,000 in Covid-19 wage subsidies, bringing its total public funding last year to $1.1 million.

Helicopter company Volcanic Air, with whom one of the deceased flew to the island, was also paid more than $1 million - comprising more than $390,000 from the eruption recovery fund, $500,000 from the government's Strategic Assets Protection Programme, and $121,000 in Covid-19 wage subsidies.

The Whakatāne District Council has refused to disclose the recipients and sums until now, citing commercial sensitivities.

It helped approve grants, and had assured recipients the information would remain confidential.

RNZ made a complaint and after investigating, Chief Ombudsman Peter Boshier ruled "the council was not entitled to withhold a breakdown".

She told RNZ it is "absolutely unfair" the companies had received the payments, when her clients have just had ACC payments.

"It's astonishing to me that the alleged wrongdoers would have received such large sums of money."

Yousef says for her clients, the effects of the tragedy are just as real today as they were when it first happened.

Small Business Minister Stuart Nash would not be interviewed about the grants.

But in a written statement he says: "Central and local government decisions about business support measures were made accordingly to eligibility criteria."

When asked if the public funding eventually could be used to pay WorkSafe fines and reparations - if defendants are found guilty or plead guilty - Nash says "it would be inappropriate to speculate".

White Island Tours declined to be interviewed, but also provided a written statement to RNZ.

"The funding granted was primarily used to support the ongoing employment of staff and the coverage of fixed business costs through the summer period, when tourist numbers were reduced and the business had very limited income," it says.

Volcanic Air chief executive Phil Barclay also declined to be interviewed, but in writing, he says all reporting requirements are "strictly adhered to" after the funding was received.

He says the eruption and Covid-19 had created "an incredibly tough couple of years".

"Funding has allowed the business to keep our staff employed, pay for aircraft maintenance, product development, marketing and meet our regulatory requirements."

Whakatāne Mayor Judy Turner rejected RNZ's request for an interview but the district council provided a statement, defending its actions.

"The grants provided a much-needed lifeline to a number of businesses, enabling them to retain staff and continue to contribute locally. A robust process was prescribed for the Whakatāne District Council to facilitate the establishment of an independent panel to consider and approve applications for support."

A Ngāti Awa representative was on this panel.

Conflicts of interest had to be carefully managed because the iwi owns White Island Tours.

Ngāti Awa lost 245,000 acres of land to Crown confiscations so rūnanga leaders weighed up the White Island Tours deal for months, cautious of their accountability to more than 16,000 iwi members from 22 hapū, to whom Whakaari is sacred.

Pilots from Kāhu NZ and Volcanic Air flew to Whakaari to rescue survivors after the December 2019 blast.

Now these two businesses are before the courts, 140,000 people have signed a petition to have their charges dropped.

But WorkSafe's prosecutions only relate to alleged actions before the eruption, not after it.

I’ll stand by my original comment. Regarding the loss of a helicopter - insurance. Regarding Covid wage subsidies - their business hasn’t been disrupted by Covid. It was disrupted by the eruption. Regarding further grants and subsidies from public money for Whakaari businesses - disgraceful when the real victims have to fight tooth and nail to get anything. I don’t know how they managed to show that their business revenue had suffered due to Covid? Pure timing, lack of scrutiny and public money doled out willy nilly. Heroic efforts are completely irrelevant to the story. If there was a public fund for heroism they may have met the criteria. But there isn’t. Please read carefully and think about it.

Please read the second paragraph from the Whakatane Mayor about the processes involved here before criticising and the fact their business suffered because of the eruption.One even lost a helicopter in the rescue effort do not forget the heroic efforts to save lives.

The way public money is doled out in NZ without scrutiny or ethical standards is remarkable.