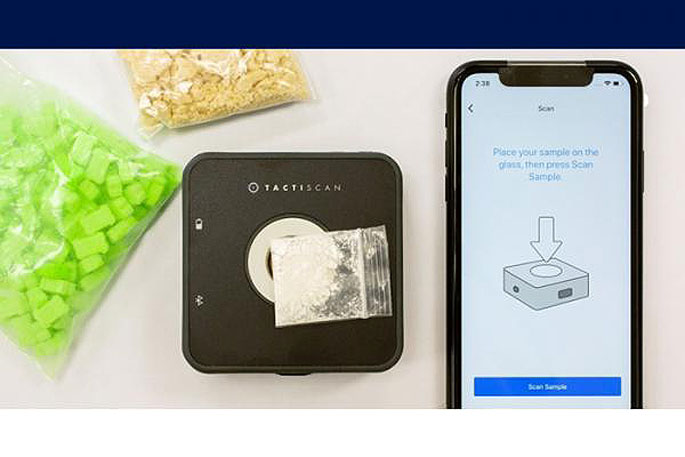 The handheld device has been used in a pilot programme for six-months. Photo: NZ Police.

A six-month pilot of a handheld device that allows frontline police officers to carry out on-the-spot screening of suspected drugs has shown some promising results.

The Lumi Drug Scan service has been jointly developed by ESR and New Zealand Police.

It allows police staff to test for the most commonly found drugs – methamphetamine, MDMA, and cocaine – and receive almost instantaneous results through their Police iPhone, says a police spokesperson.

“An evaluation of the pilot, which was undertaken in Tāmaki Makaurau/Auckland, Central and Canterbury Districts, found the majority of frontline officers who used it have ‘high confidence’ in the service.

“In total, 25 Lumi devices were used across the five districts.

“They were used at 481 different events with 884 items screened during the pilot period. Lumi identified methamphetamine, MDMA, or cocaine in more than half of these events.

“Of the three substances that could be detected by Lumi, methamphetamine was the most common drug type identified during the pilot and accounted for around a third of the total items scanned.”

There are limitations with the scanning device only identifying three drugs.

On average each district had two to three scans per event, says police.

Number of events and scans per participating district:

“Identifying the drugs supports officers to consider the best way to resolve the incident and ensure the person in possession of the drug is considered for a health-based resolution.”

One officer in the pilot said “… when you are showing them the evidence right then and there on Lumi saying this is what it’s come back with, it’s clear to both of us what the substance is, and I want to give you help for your drug habit by giving you a referral, it makes it easier to interact with them over that.”

The bulk of officers involved in the pilot said they were able to make informed decisions quicker, without the need to bring a person back to the station, says O’Brien.

“Through our co-design approach we were able to develop a unique service that combines forensic science expertise, frontline knowledge, and cutting-edge technology into a solution that works in the real-world,” says Sheppard.

He says the robustness and dependability of Lumi is a consistent theme in the Evaluation Report.

“It’s fair to say Police work in some of the most diverse and challenging environments around New Zealand. Where police go, Lumi needs to be capable of going, and the service is a real success in terms of its reliability,” says Sheppard.

“Lumi is part of the suite of tools, techniques, and processes ESR scientists have refined over many years that complement one another, which means when Police find larger quantities of suspected drugs they can send the substance to ESR’s forensic chemistry laboratories for comprehensive evidential analysis.”

One Police officer in the pilot said, “we will always have to go to ESR for court and evidential purposes, but Lumi as a drug screening tool it’s fantastic.”

Lumi offers users a dashboard with insights about drugs detected using the scanning service around the country.

This data gives police and potentially health authorities real time information about drug usage in New Zealand so resources can be directed to where they’re most needed.

The evaluation report is now under consideration.