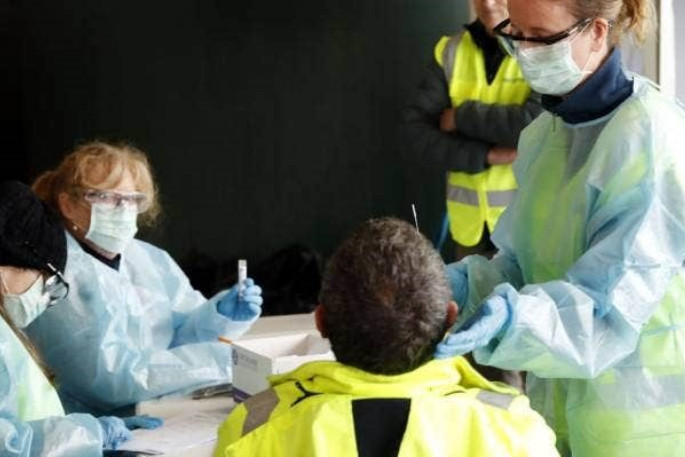 This number includes three of the confirmed cases aboard the Mattina container ship, which is currently quarantined in Bluff.

“As we reported earlier today, nine of the 21 crew members aboard the Marshall Islands-flagged container ship have returned positive results,” says the MOH.

“Eight of the nine confirmed cases are symptomatic. They are well enough to remain on board.

“The ship is currently in a secure quarantine area of South Port in Bluff and all crew remain onboard, while health officials work to determine the next steps for the crew members.”

The MOH states health officials will be closely monitoring the health and welfare of all crew members each on a daily basis as further decisions are made.

“Health officials have determined that the only port member who had contact with the ship crew is the Southport pilot, who went aboard the ship as it entered the port.

“Pilots are required to board vessels of this size when berthing. The pilot wore appropriate PPE and is fully vaccinated.

“Our ongoing case investigation shows the pilot had some contact with three crew members, however all three have returned negative test results.

“This means the harbour pilot, who has been self-isolating, is now not regarded as a close contact and will no longer be required to isolate.

“It has been removed from our confirmed cases tally as it was reported as a historical case in their home country,” says a MOH statement.

The number of active cases in New Zealand is 51.

Our total number of confirmed cases is 2,466.

Playa Zahara Update
Daily health and welfare checks are continuing for all crew members who remain onboard the Playa Zahara in quarantine in Lyttelton.

“None of the 16 previously reported confirmed cases from the Playa Zahara have been included in our case tally at this stage, as they remain under investigation to determine if they’re current or historical cases.”

Travellers from Australia
The pause on Quarantine-Free Travel from Victoria and New South Wales will be reviewed again on Wednesday 21 July.

Advice for recent travellers from Australia:
Anyone who was in Queensland since 28 June is encouraged to check the Queensland Health website for locations of interest.

Anyone who was in Victoria since 8 July is encouraged to keep checking the Victoria Health website for locations of interest, with new locations continuing to be announced.

People who have been at these locations at the relevant time are required under a section 70 notice of the Health Act to immediately isolate at their home or appropriate accommodation and call Healthline on 0800 358 5453 for advice on testing.

Further information about Quarantine-Free Travel between Australia and New Zealand, and details about acceptable pre-departure documentation, is available on the Unite Against COVID-19 website.

“So far, contact tracing has identified 31 people in New Zealand who have been in locations of interest in the two states at the relevant time,” says the MOH.

“Of those, 28 have returned negative results. Two contacts are not yet due for their day five test and the test result for one contact is pending.”

Quarantine Free Travel rule change
A change to the rules around Quarantine Free Travel (QFT) with Australia now allows people to return to NZ if they have been in ‘low risk’ States or Territories (i.e. those with which QFT is not paused) for 14 days or more, as long as they meet the other QFT conditions of entry. It also exempts people arriving from Norfolk Island from the pre-departure test requirement for entry into NZ on a QFT flight. The change came into force from 11.59pm on 19 July 2021.

This means that people who have been outside New South Wales or Victoria for 14 days or more, and who meet all other QFT criteria, can now return to New Zealand on normal quarantine-free flights.

The change reflects public health advice that, with all the other safeguards, these people pose a low risk of bringing Covid-19 into New Zealand. Pre-departure tests are still required 72 hour prior to travel for all States/Territories except NSW (because people arriving from there have to go into MIQ) and now Norfolk Island.

Testing
The total number of Covid-19 tests processed by laboratories to date is 2,405,241

On Monday, 3,517 tests were processed across New Zealand.

The seven-day rolling average is 5,624

Why are the remaining 6 positives going to be included in tomorrow’s tally and not todays? Screwing with the numbers to make it look better? I don’t understand that one.