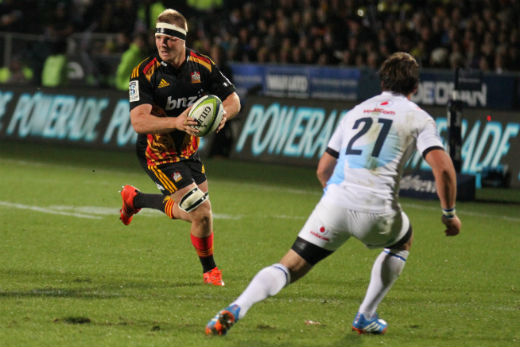 Sam Cane in action for the Chiefs. Photo. Tracy Hardy.

Bay of Plenty Steamers fans might be fortunate enough to see Sam Cane in action this season, as he eyes up a return to action after a spell out with injury.

The All Blacks captain tore his pectoral muscle in a Super Rugby Aotearoa match for the Chiefs back in March.

The former Tauranga Boys’ College student eventually underwent a full shoulder reconstruction, as he reveals to SENZ’s Mornings with Ian Smith this week.

It means a six month recovery time is likely, with Cane looking at the final few games of the Steamers’ Bunnings NPC season firmly in his crosshairs.

“I’ve looked at where the six-month mark sits post-surgery and there’s two or three games on the Bay of Plenty schedule before playoffs, so will be pretty nice to be able to pull on the Bay jersey,” Cane says.

Cane’s six-month recovery time, from the point of his March 27 injury against the Blues, conceivably makes him available for the Steamers final three games of the regular season, against Taranaki, Wellington and Counties Manukau, on September 26, October 2 and October 10 respectively.

The big hope will be Cane is then fighting fit for the semi-finals and the final, with Daryl Gibson’s side having high hopes of going one better than 2020 and making it to the final.

Cane, from Reporoa, was named All Blacks captain in May 2020 and has 70 caps for his national side.