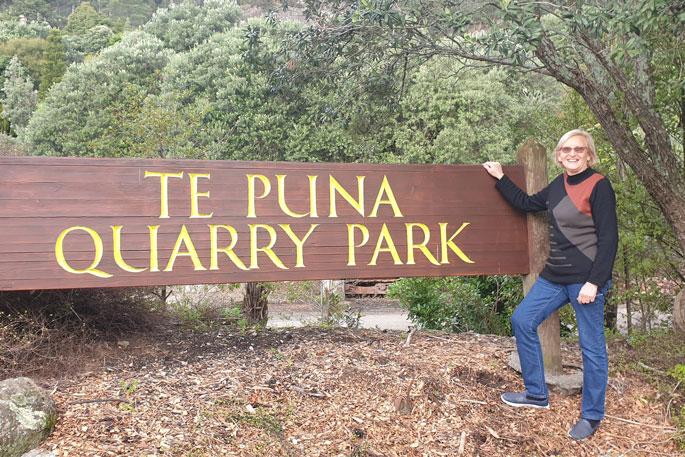 Volunteers at Te Puna Quarry Park are feeling a great sense of relief and reassurance now a new security system has been installed following a series of thefts.

The volunteer-run park, which is open year-round and is free for the public to visit, sees thousands of visitors come to explore its many gardens with special planting areas, outdoor art, walking tracks and bush area.

But a major theft in 2018 left the park committee and volunteers shaken, when $40,000 of equipment was stolen from their workshop over one weekend.

Trailers, a truck, chipper and tools were taken, and while two tractors were left behind, the keys for these were also seized.

The Te Puna Quarry Park team was reeling and became concerned for the safety of volunteers and the public.

There was a realisation that the park was fairly isolated, and volunteers could not be on-site all hours.

In the years since, there have been multiple other incidences of concern.

“These occurrences brought much disappointment and anguish to the dedicated team who look after the park,” says Te Puna Quarry Park Committee Member Ruth Dainty.

“It was pretty disappointing when you turned up for a workday to find plants that you had planted a couple of weeks ago gone and an empty garden left behind, or having to sweep up broken glass. For our 60 plus volunteers, it is definitely disheartening.

“The theft in 2018 really got us thinking, my goodness the park is vulnerable. We were aware that the park was not being watched by anybody, so the volunteers started to do the watching.

“We had a party that got out of control with broken bottles and a lot of damage, we noticed some disturbing behaviour, and we spent about $10,000 trying to repair the gates after they have been damaged time and time again.”

After Ruth voiced her concerns at a Kaimai Forum, local security company Tarnix Security was recommended.

“Tarnix is watching the footage day and night, and the camera also pings in the watch room if there is a number plate of interest to the police. So we now have that constant lookout and proactive management of anything that looks suspicious.

“It’s a fantastic system that means we don’t have to record footage ourselves and then work out how we would review it – it is all out-sourced and watched 24/7 with night vision, too.”

Ruth shares that she has since received several positive comments from visitors about the security system.

“Visitors are saying how much safer they feel, how they park their car in front of a camera now. The volunteers are also feeling much happier that their work is being protected, and they are watching with great interest to see how things are changing around the park.

“Since Covid-19, we have seen a definite increase in visitor numbers. People are starting to investigate their backyard and we get a lot of comments from people saying they didn’t realise Te Puna Quarry Park was here and they can’t believe they hadn’t been for a visit sooner.

“Places like Te Puna Quarry Park are so important for people’s wellbeing – it’s a great place to exercise, children can investigate the wonders of nature, and we all know green spaces are good for mental health. We’re pleased that now more people can enjoy all that safely.”

With the security system costing over $10,000, and the park supported only by a small stream of generous donations throughout the year, some serious fundraising was needed.

The first donation came spontaneously from the Omokoroa and District Lions Club and some other donations from generous individuals followed.

Te Puna Quarry Park Society then decided to approach TECT to see if the local trust would support the project. 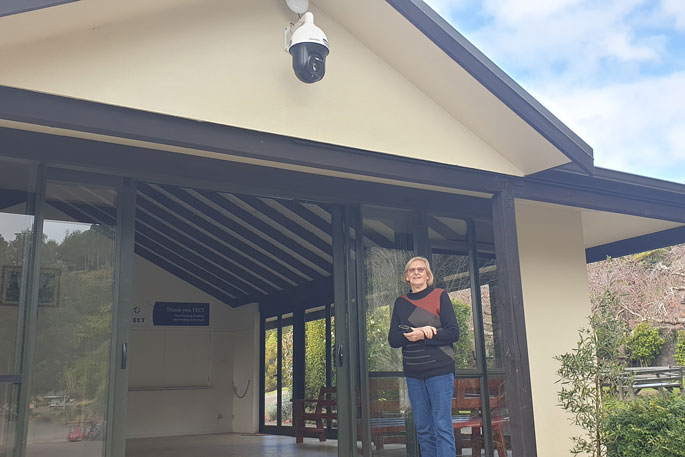 Ruth Dainty outside The Gallery with one of the newly installed security cameras.

TECT was fully supportive and approved funding of $5,440 towards the security system, which Ruth says provided the kickstart to find the rest of the funds.

“We have had a long history of support from TECT going back to 2003, with their funding going towards the construction of the Gallery, Green Room and amphitheatre.

“The Western Bay of Plenty District Council soon came on board to fund the remaining sum. So it ended up being fully funded, including the internet set-up, which is incredible for us.

“We’ve since had to pay to set up internet access for the 24/7 streaming of footage to the security company. RexNetworks set that up for us and gave us a very generous discount, which we are incredibly grateful for, and a neighbour down the road has kindly taken on an extra modem for us.

“For anything major like this new security system, we have to find special funding from other avenues. The donations we receive from the public keep us ticking over and enable us to cover the maintenance cost of the park, such as electricity, internet, petrol, plants and sprays.

“The new security system will make a huge difference to our community’s safety, and it wouldn’t have been possible without the support of these organisations, people, and TECT. It’s truly a community effort.”

The Te Puna Quarry Park has a number of upcoming developments. It was recently confirmed in the Western Bay of Plenty District Council Long Term Plan that Te Puna Quarry Park will receive an upgrade of its carpark next year, with sealing needed to provide improved safety.

The Bethlehem Te Puna Lions Club is also currently planning a new look Te Puna Quarry Music Fest on November 14 this year, after two years of cancellations due to weather and Covid-19.

Another new initiative this year is a bi-monthly Plant Sale on the second Sunday of the month.

The next sales are on August 8 and October 10, offering visitors a chance to gather ideas for their garden and to purchase plants grown by the volunteers, garden equipment, produce and craft items.

To learn more about upcoming events and news about the park, and all that is waiting to be explored, visit www.quarrypark.org.nz

To the volunteers. Well done. Such a shame some people who wreck other people’s great work and effort these days, have to be so destructive? There is something wrong with society these days. At least you volunteers do your stuff so well. Cheers!