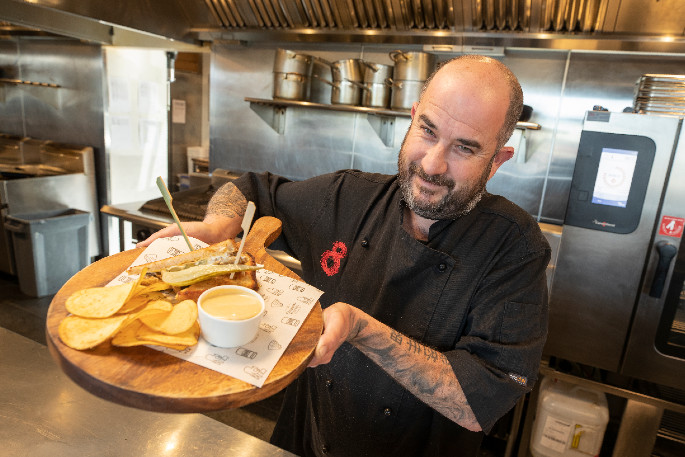 The humble Kiwi toastie has had a makeover.

Instead of your typical ham and cheese, which is delicious in its own right, it is now sporting gourmet ingredients.

The change up is in the name of finding New Zealand’s top toastie, with cafes and restaurants around the country vying for the top spot.

Mount Maunganui chef Shane Kearns is one of 12 finalists in the Great New Zealand Toastie Takeover, with his entry White as Snow.

The head chef at Fire and No.8 restaurants has entered three times and is stoked to be a finalist this year.

“It’s fun to do and there’s something institutional about Kiwis and a toastie,” says Shane.

When choosing what to make he took inspiration from his Asian kitchen at No. 8, but is fairly relaxed about the makings of a great toastie.

“You want a nice crisp bread and the right amount of cheese,” he says. “That’s it. You can pretty much slap anything else in there.”

When it comes to bread, however, he is more particular, choosing loaves from local bakers Mount Sourdough Co.

“You want something that's going to toast nicely,” he adds. “I let it dry for a couple of days in the fridge and then that allows it to toast a lot more.”

The correct thickness of bread is also key - too thin and it’ll be too crispy, and it needs to be thick enough to remain soft in the middle, says Shane.

You also need to be able to eat it easily with your hands, which is one of the requirements of the competition. The others are that the sarnie contains cheese, McClure’s pickles and is toasted between two slices of bread.

Blind tasting of the toasties at the restaurants by a judging panel will decide the winner, which will be announced on July 30.