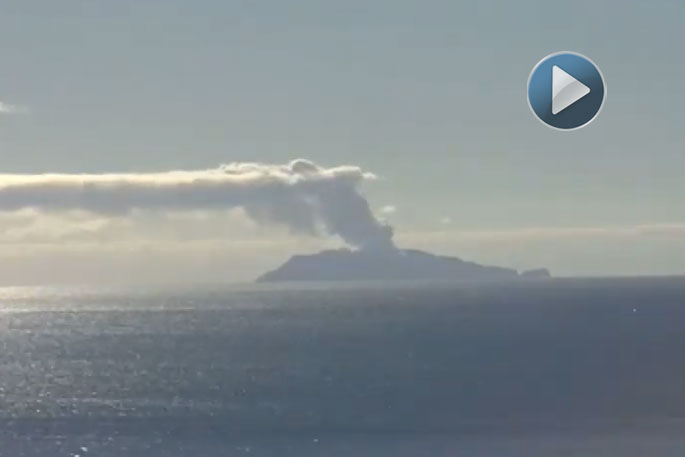 Bay of Plenty residents may have noticed large plumes of smoke emitting from Whakaari/White Island in recent days.

The plumes have also been observed on GeoNet's volcano cameras, along with a strange glow on the night cameras.

"With ideal weather conditions during the last couple of weeks, the residents of Bay of Plenty were able to view large steam and gas plumes from Whakaari/White Island," says Brad.

"These were also visible via the web camera watching the volcano from Whakatane. The steam and gas plume originates from several active vents on the island and are clustered in and around the craters formed in December 2019."

Brad says several factors contribute to how the steam and gas plumes appear above the volcano.

These include heat flow, gas output, and the presence of ground water, lakelets or crater lakes.

"Line all of these up like we did over the last couple of weeks and you can have large spectacular steam and gas plumes over the volcano.

"Gas is formed from subduction and magmatic processes at depth and is discharged at volcanoes and geothermal areas.

"The gas leaks from the rising geothermal fluids and molten rock (magma). Steam-water vapour (H2O) is the most common volcanic gas constituent. However, there are several other gas species present.

"After steam, in order of abundance they are carbon dioxide (CO2) sulphur dioxide (SO2) and hydrogen sulphide (H2S). GeoNet measures the amount of these present during regular gas flights."

What is the Night Glow?

Since June 30, GeoNet has seen a night glow return to the island, visible from the Crater Rim camera at night.

"Our Volcanic cameras have both daylight and low light cameras installed, allowing pictures to be taken at night when there is enough ambient light (such as from a full moon," says Brad.

"The low light cameras are also able to see the hot steam and gas vents, and these appear as a ‘glow’ on our cameras on the island.

"This usually requires moderate-strong and hot emissions from the vents on the volcano for this to occur.

"Observations from a flight on July 15 confirmed temperatures of 5-600 °C are now present.

"You can clearly see the night glow in the image below, with the daytime view for comparison.

"This 'glow' is only visible in the near infra-red with our webcam and unlikely to be visible with the naked eye."

The cameras allow us to keep an eye on the volcano, says Brad.

"If we wish to see images during unrest or an eruption, we can download the high data rate images as needed. They are a great aid to our monitoring."