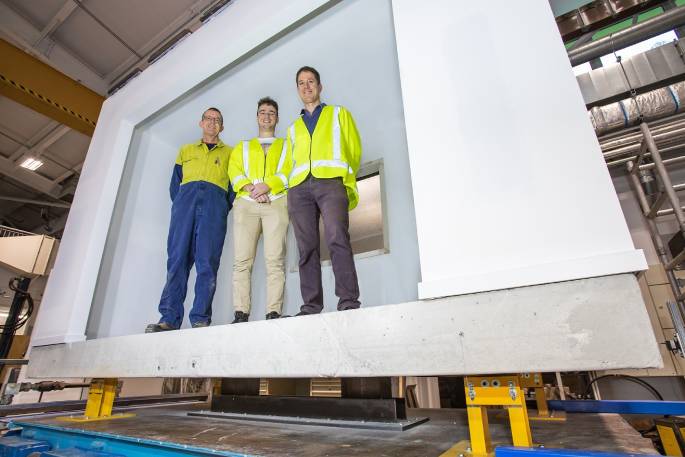 John Maley, Tom Francis and Tim Sullivan are part of a University of Canterbury research team testing a new base isolation system to make New Zealand houses safer in an earthquake. Photo: Supplied.

A new, affordable building system to make New Zealand homes much safer in an earthquake, avoiding costly repairs and stressful insurance claims, is being tested at the University of Canterbury.

A room has been specially built for the trial with timber framing and gib-lined walls on a concrete slab foundation.

The structure is positioned on top of the newly developed, steel base isolation units.

Underneath this, a shake table – one of the largest in New Zealand – is being used to recreate ground movements recorded at various locations during the damaging Canterbury earthquakes, as well as other strong historical earthquakes and a simulated Alpine Fault quake.

The research is part of a broader UC and QuakeCoRE project that is developing a range of solutions for low-damage housing in New Zealand.

Results so far show the base isolation units are effective and would have withstood the 2010-2011 Canterbury quakes and 2016 Kaikoura earthquakes (7.1 and 7.8 magnitude respectively), as well as an Alpine Fault scenario, without the room needing any repairs.

Professor Sullivan’s goal is to keep the seismic system as low-cost as possible so it can be widely adopted by homeowners around the country, making their houses significantly safer during future earthquakes.

“What’s been motivating me on this project is the idea of developing something that would avoid damage to housing in a major earthquake, or at least make the likelihood of damage very low.

“We think what we’ve come up with will prevent damage, and it doesn’t cost an arm and a leg. It also promises to reduce the disruption caused by a major quake, helping communities recover more quickly,” Professor Sullivan says.

Base isolation systems, developed to prevent or minimise damage during an earthquake, are primarily used in commercial or civic buildings in New Zealand because they are usually expensive and require specialised engineering.

Their aim is to keep the total cost of manufacturing and installing the base isolation system to about $15,000 for a typical three-bedroom house.

A key to achieving this is the simple nature of the devices, which are expected to cost about 10 per cent of the cost of base isolation devices currently used in commercial building projects.

Professor Sullivan says houses in New Zealand currently perform well in terms of saving people’s lives, but there is room for improvement in terms of preventing damage to the structure and its contents.

“Very few people die in houses during an earthquake, but $16 billion of the $40 billion paid out by the Earthquake Commission following the Canterbury earthquakes was for damage in the residential housing sector.

“While around half of these losses were linked to ground damage (liquefaction and lateral spreading), the damage to houses caused by ground shaking was significant and needs to be reduced.

“Research has shown that the most upsetting thing for a lot of people wasn’t the earthquake itself, it was dealing with insurance claims, the potential loss of value for their houses, and the damage to their belongings.

“If we can avoid that, then I think there will be psychosocial benefits.”

So far, testing has shown the system is able to limit building deformations, preventing damage to walls and cladding, and keeping floor and roof accelerations low.

This reduces the likelihood of damage to homes and their contents.

“We think it will also reduce problems caused by torsion, or twisting, that can occur with some house designs during a quake,” Professor Sullivan says.

“Once we get a few building companies doing this, it will become more competitive and more affordable. We’re also hoping it could lend itself to faster construction and modular housing, which could be useful in combating the current housing shortages.”

Professor Sullivan is applying for more research funding so the system can be further developed and improved.

“It means we are able to understand how much money can be saved over the lifetime of a residential building by limiting earthquake damage using the base isolation system.”

The main hurdle to overcome during the design stage for the innovative system was balancing the need for a house to be stable in high winds but also able to flex and absorb shock from an earthquake.

The system is created by installing several steel base isolation units under the concrete foundation of a house, which work in a similar way to traditional piles.

The concrete slab includes steel plates that float and slide on small round discs in the units, which Professor Sullivan calls ‘pucks’, allowing the house to move around in a quake and absorb the displacements and accelerations imposed by ground shaking.

The system is compatible with common building techniques for New Zealand houses and can be used under steel and timber-framed buildings or other typical structures.

It’s designed to be easy to repair after an earthquake and as sustainable as possible, with recycled, biodegradable cardboard used to create a cavity under the foundation.