Viewing the conjunction of Venus and Mars tonight 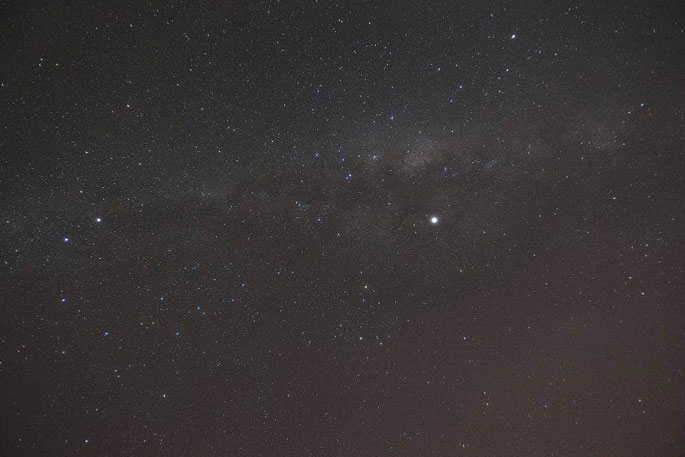 Those with clear skies tonight can expect to see a special sight with the conjunction of Venus and Mars. Photo: JOHN BISSET/STUFF

New Zealanders are set for an out of this world treat with the conjunction of Venus and Mars in tonight’s evening sky.

Shortly after nightfall on Tuesday, stargazers will be able to see the two planets line up, next to a waxing crescent Moon. The type of line-up is known as a “conjunction”.

According to Nasa, people watching from Earth would have seen Venus and Mars get closer each evening across the month of July. On Tuesday (in Aotearoa), the planets will appear very close together – if stargazers place their hand up towards the sky, the two planets will appear just a finger's width apart.

Of course, it’s a line-of-sight illusion since the planets are actually very, very far apart, but it might make for some great photos and school holiday fun.

According to Nelson-based space scientist Dr Duncan Steel​, the best time to head outside and get your camera ready will be around 6.30pm.

Dubbed the evening star, Venus, and red planet (Mars) will be visible low in the sky in the west after sunset.

The two-hour window after sunset, especially when the night sky is a bit darker, will be the best time to see the conjunction of Mars and Venus, Steel says.

Tonight’s conjunction means that Mars and Venus will appear only a finger’s width apart!

As we continue studying the red planet, we will also send 2 new probes to our other cosmic neighbor. Learn more: https://t.co/ZpSsjOKRey pic.twitter.com/zLoSjAEvrT

“Venus appears a very, very bright white, it will be the brightest thing you can see in the sky at the time, apart from the Moon.”

“Mars is not as bright, but people will be able to see that Mars is a kind of pinkish shade to the naked eye.”

Steel encourages people with a telescope or a pair of binoculars to “take a gander through those”, but said most people shouldn't have a problem locating the planets due to how close they will appear near the Moon.

Who has the clearest skies?

According to MetService meteorologist Mmathapelo Makgabutlane​, tonight is one of the better nights for stargazing this week.

Much of the South Island will have pretty good conditions for stargazing, with the exception of some cloud cover in the far south, she says.

The western and central areas of the North Island will also have clear skies on Tuesday with “quite good viewing conditions”.

Wellington will have some cloud cover at night, although Wellingtonians might be able to catch a glimpse of the conjunction through breaks in the cloud.

Cloud is also forecast in Gisborne, parts of Hawke’s Bay and Wairarapa on Tuesday night. Some high cloud is expected over Auckland, and further cloud is forecast in the western areas of Northland.

According to Nasa, July is one of the best times of year to enjoy the magical sight that is the Milky Way.

In June, the US space agency announced it was returning to Venus with two new robotic missions. These aimed to map the rocky planet’s surface and also measure the planet's gases. Nasa attempts to determine whether the inferno planet ever had an ocean and was possibly habitable.