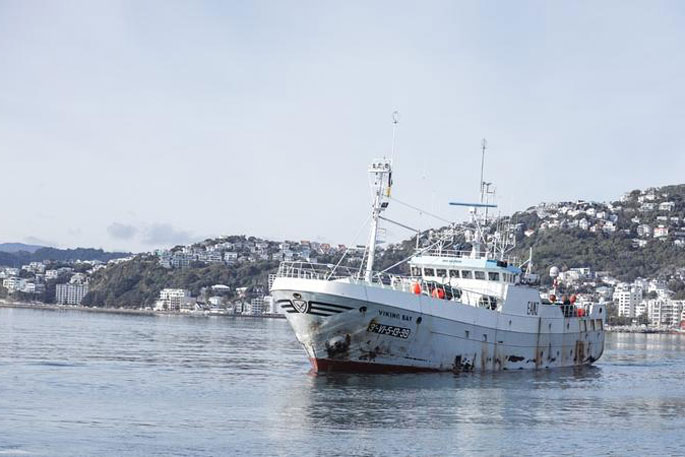 The Ministry of Health has received confirmation of an additional 13 positive tests to Covid-19 for crew from the quarantined fishing vessel Viking Bay.

Two crew had previously been reported as confirmed with the virus.

All 15 affected crew have now been transferred to an on-shore quarantine facility in Wellington.

Five crew members remaining on board to maintain the safety of the vessel have returned negative test results to date, says a statement from the Ministry of Health.

They will be subject to additional testing in coming days.

"Of the crew who have now returned a positive result, 12 are regarded as being in the early stages of their infection," says a Ministry spokesperson.

"One has returned a result indicating either a very early infection or a historical infection. Further testing planned for today will help provide more information about this.

"Plans are in place for managing the remaining five crew members should any of them develop symptoms or be confirmed with Covid-19 from further testing while in quarantine on board the vessel.

"The transfer of the crew members was done with the appropriate precautions in place and following advice from the local regional public health service."

Slightly over half of the crew have been at sea since February.

They were joined by another nine other crew members who arrived in New Zealand on July 5 as part of the vessel’s scheduled crew change.

One of the crew was confirmed last week to have the Delta variant, says the Ministry.

No link has been shown between this case and any other cases previously identified in New Zealand.

Genome sequencing of the 13 positive test results will begin today.

"The spread of Covid-19 within the crew reinforces the importance of bringing the ship back into port and transferring the crew to an on-shore quarantine facility.

"This allows the public health risks to be appropriately managed and the crew to be kept in isolation until they have completed their 14 days isolation and recovered."

No. Just like hundreds of airline crew who don’t have to Quarantine. Different strokes for different folks.

So "They were joined by another nine other crew members who arrived in New Zealand on July 5 as part of the vessel’s scheduled crew change." Were they not required to be in MIQ for 14 days??