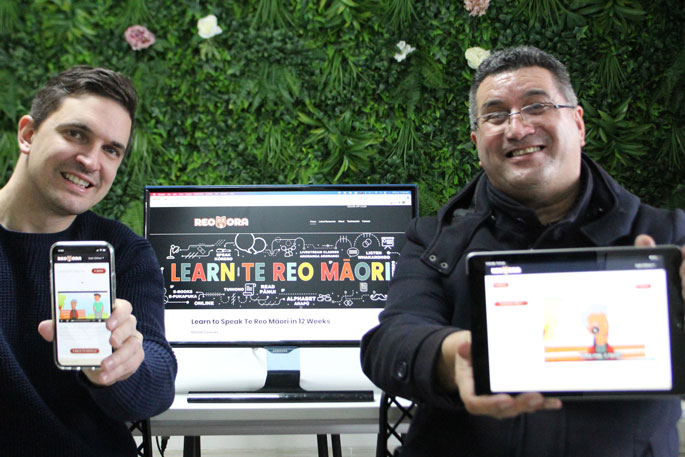 Bay of Plenty teachers now have access to a world-leading Te Reo Māori app, through a Ministry of Education initiative aimed at strengthening New Zealand’s education workforce in Te Reo.

Dr. Wiri says the multi-dialect app is the only one of its kind, accepting answers in all different Māori dialects based on tribal differences.

Salt & Tonic director Josh Dillner says it also features the world’s first transcription service for Te Reo by Te Hiku Media, where students can record themselves speaking and transcribe it into text.

"It's been a privilege to deliver world-class technology with a local solution at the core."

Reo Ora is working alongside Te Taumata o Ngāti Whakaue Iho Ake Trust with the Ministry of Education’s Te Ahu o Te Reo Māori initiative, with the aim of training 10,000 teachers and support staff in Te Reo Māori nationally per year, including 1000 in the Bay of Plenty.

“Reo Ora will initially be used to train 470 people in the wider Bay of Plenty region, including Rotorua, across early childhood, primary and high schools,” Dr Wiri explains.

The app is currently being used through Ngati Whakaue’s Māori language strategy to encourage a revitalisation of the language within the iwi and is also generally available to anyone who would like to learn Te Reo Māori through www.reoora.com.

Dr Wiri says there is a massive national demand for Te Reo courses. Many institutions like Te Wānanga o Aotearoa cannot cope with the demand and have long waiting lists.

He explains the app is an effective way of teaching and delivering material, as well as overcoming common hurdles students face when learning a new language, such as the fear of mispronouncing a Māori word or phrase, in public.

“The motivation for many students learning through the app comes from not wanting to say it wrong in front of a class. If they’re on Zoom, they can listen; they can practice on Facebook and go at their own pace. We call it self-determined learning and it’s the new way of doing things.”

These words and patterns make up 65 per cent of everyday conversation.

“Ours is a formulaic method. It’s based on patterns and repetition of sentence pattern, which is the most effective way to learn a language,” says Dr Wiri.

“We have taught over 250 students who have completed the Level 1 course with remarkable results.”

“My grandmother spoke fluent Te Reo, then my dad was told he shouldn’t as it would impact on his ability to get ahead – it also meant I was never given the opportunity – looking back, it’s a tragedy.

“So, I looked around for ages trying to find ways to learn Te Reo, researching textbooks and a range of other options. Then I came across Reo Ora. I’ve come such a long way with this course, which is great through the app as I’m too busy to attend lectures.

“Te Reo has a grammar structure that is crucial to understand – the way this course is structured has helped me to pick that up. I’ve learnt a lot. Discovering my language has been a privilege – it would have been lovely to have had the opportunity to kōrero with my grandmother,” says Mr Moore.

Dr Wiri has been a Māori language lecturer within universities in New Zealand and Hawai’i for the last 30 years.

During this time, he has taught thousands of students to become confident speakers of Te Reo Māori.

He encourages everyone to practice these sayings in Māori: