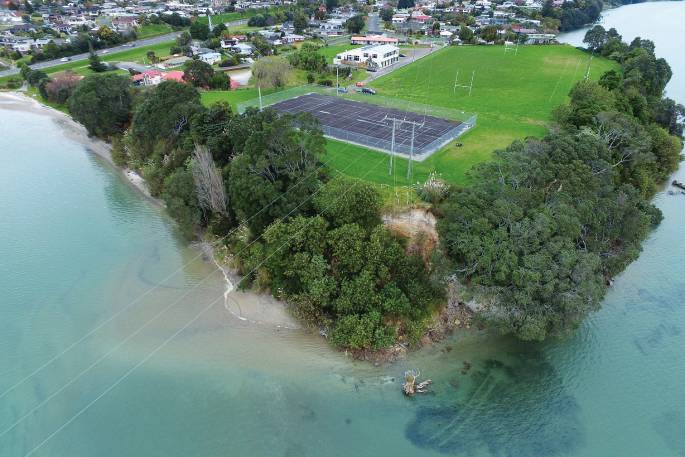 The power lines which pass over the marae in Maungatapu. Photo: Supplied/Bay Waka.

Transpower have applied for leave to appeal a High Court decision regarding power lines which traverse over the Maungatapu Marae.

In May, the High Court overruled a previous Environment Court decision to grant consents to Transpower to replace the 3.3km 110kV A-line, with a power pole set to be placed next to the marae.

The powerlines, operated by Transpower, were installed by the Ministry of Works in the late 1950s.

The lines, which stretch across Rangataua Bay between the marae in the south and Matapihi in the north, have long been a source of contention for the Ngāti Hē hapu and the community surrounding the Opopoti marae.

Transpower’s plans for replacing the lines did not align with members of that community, but the Environment Court granted consents.

The High Court quashed that decision in late May, following an appeal by the Tauranga Environmental Society, with the backing of Ngāti Hē and marae trustees.

Justice Palmer’s ruling stated that Ngāti Hē are the experts of their own land and that if their collective “considered, consistent and genuine” view is that the proposal has a significantly adverse impact on an area with cultural significance to them it is not the place of the Court to rule in opposition.

The High Court ruled that the solution to replacing the power lines is not in line with “Ngāti Hē’s rangatiratanga, guaranteed to them by article two of the Treaty of Waitangi”.

“This has made New Zealand case law, and right here in Maungatapu. But the fight is not over.

“The facts are that if you are kaumatua and explain that your cultural values are harmed by a proposal and why, by law, proper consultation with the rightful people, not self-appointed so-called representatives, is needed prior to applying for consent.”

It was a decision celebrated and discussed at a hui last month, under the shadow of the powerlines.

But it now appears the contentious battle, which has waged for more than 60 years, may still continue.

“We appreciate the harbour, pā and marae are of cultural significance to manawhenua,” says a Transpower spokesperson.

“We are concerned that the High Court decision has not properly taken into account the significant positive benefits of the proposal, including maintaining security of supply to Mount Maunganui and for affected landowners.

“The decision has significant legal implications for Transpower and other infrastructure operators on how to correctly interpret and apply RMA planning instruments when consents are sought.

“These legal implications include when it is appropriate for the High Court to interfere with the Environment Court’s findings of fact to substitute its own.

“Therefore, we have applied for leave to appeal the decision to the Court of Appeal.”

The Tauranga Environmental Protection Society will be opposing the leave to appeal.

Transpower state they will continue to engage with affected parties, including the Maungatapu Marae Trust, hapū/iwi, Regional and City councils and communities on both sides of the harbour, but can give no further comment given the matter is now before the courts.

Tauranga City Council and Bay of Plenty Regional Council were both respondents of the High Court appeal launched by the Tauranga Environmental Protection Society. 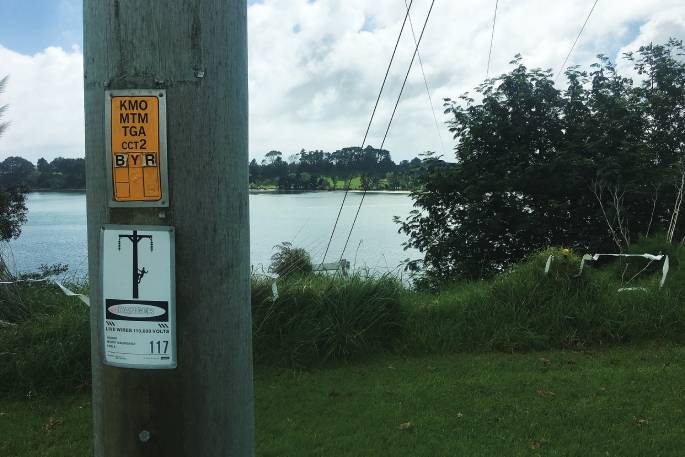 Both Antoon, and Peter McArthur, Tauranga Environmental Protection Society chairman, believe communication from Transpower, and the two councils involved, was not of the required level throughout the decision making process.

“It is time to listen and find out from those involved, whether that be the marae or whoever,” says Peter.

“But they all sit in their little silos. There has been a complete lack of communication.

“There are numerous other options available that would suit all parties, but they need parties to listen to each other’s needs and suggestions and identify the best solution for the community.”

"Otherwise,” says Antoon. “Like in this case, good local tax payers like us end up paying a hundred times more in avoidable legal costs, plus the cost of time and effort in our communities, while these civil servants continue to take home their wages paid for also by us.

“This is a very bad business model.

“From now on, learning about our wonderful local Māori communities will be essential to progressing a smooth consent driven development of this awesome city.”

Tauranga City Council were unable to comment on the High Court decision at this time, but state an intention to ensure continued communication with those impacted by the issue.

“Our community’s needs and wants are always at the heart of our decisions,” says Barbara Dempsey, general manager: Regulatory and Compliance.

“We have proactively been engaging with the impacted parties over this issue, and will continue to do so.”

Bay of Plenty Regional Council confirm they will consent to Transpower’s application for leave to appeal the High Court decision as they believe it “creates significant uncertainty for resource consent decision making”.

“We recognise the sensitivity of our decision, and tangata whenua’s potential disappointment with our approach,” says Bay of Plenty Regional Council consents manager, Reuben Fraser.

“We value our relationships with our iwi partners and do not challenge the significant relationship that Ngāti Hē have with Te Awanui and Rangataua Bay.”

On the subject of communication, BOPRC insist they have a strong commitment to engagement and a fair process.

Reuben highlights a public notification process which was highlighted in local media, the posting of letters to property owners, landowners and all relevant tangata whenua groups.

“This led to a hearing where independent commissioners considered evidence from all parties and decided to approve consent,” says Reuben.

“The councils are responsible for facilitating a fair hearing process, which, in conjunction with Tauranga City Council, we upheld.

“Our second area of responsibility is ensuring that applicants engage directly with tangata whenua. We understand Transpower undertook extensive engagement as part of their application preparation.”

TEPS chairman Peter says he considers the marae one of “the most picturesque scenes of beauty in Tauranga” and is pleased the High Court has, at present, put a stop to the potential erection of a new pole.

“We all want Transpower to deliver power safely and efficiently to our communities and industry,” he says.

“But we must also ensure that, in doing so, other matters, such as the rights of the Marae, and the natural beauty of our harbour are not unreasonably damaged.”

There are numerous options and a compromise that suits everyone should be possible. But, as is so often the case, "negotiation" means getting whatever you want and digging an entrenched position. If opposing positions or ideas are not even listened to, never mind, actually considered, there will be no positive outcome. However, as our Democracy is slowly being dismembered, the idea of listening to people is being discarded. We are moving to a "win at all costs" model and consideration and respect are coming to be considered "weakness". This should never have needed to go to a High Court. Sensible and reasonable people on both sides of the table should have been able to jointly devise a practical and acceptable solution for all. But the will isn’t there, and the Goodwill is long gone...

Time for Transpower to put ALL powerlines UNDERGROUND

We have this beautiful, special and picturesque area around the bay and everywhere we look/reside (aside from new subdivisions) there are power lines (and often phone lines running under them too) and crappy poles everywhere! No only are these an overhead danger, but deathly should a car hit one, or if they fall down in a natural disaster esp if there are live lines. It is time that Transpower to start putting all possible powerlines underground and get rid of as many power-poles and hazards/eye sores urgently!

Everybody wants power, but nobody wants the lines.