Containers piling up despite global shortage 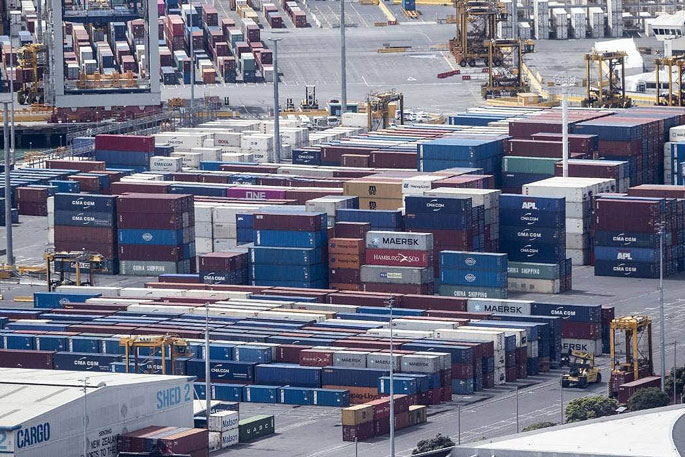 There is a global shortage of empty containers, but a shipping line in Auckland says it has too many of them. Photo: Chris McKeen/Stuff.

Shipping chaos is escalating with empty shipping containers piling up at depots and “ghost ships” being sent in to fetch them.

The fourth largest container shipping line in the world, ​CMA CGM, is refusing to take any more empty containers at its Auckland depot because it has too many of them there. Instead, the company is asking importers and others to return their containers to Northport or Tauranga.

Another container shipping line, ​Mediterranean Shipping Company, the second-largest in the world, is charging customers a hefty fee for returning empty containers to the Auckland depots they were originally destined for.

Customs Brokers and Freight Forwarders federation president ​Chris Edwards says relationships between shipping companies and other players in the supply chain are breaking down as the former start laying on fees.

“What has changed in the last 12 to 15 months is lines are being drawn between some of the shipping lines and the clients,” Edwards says.

The latest move around empty container fees means extra costs for importers who are responsible for getting those empty containers to the right depot, so they can be “evacuated” out of the country.

When an importer or someone else brings something into the country in a shipping container, they take on the responsibility of transporting it once it is unloaded off a ship.

If a container is not at the right port when an importer is finished with it, then they have to pay significant penalty fees.

​Edwards says the pile-up of empty containers is so bad, shipping lines are sending “ghost vessels” down and filling them up with empty containers just to relieve pressure on rapidly-filling depots.

Yet the financial incentives are there for shipping lines to take as many empty containers out of the country as they can.

Which has led to a different set of problems for exporters.

In recent months, exporters have faced significant problems getting shipping lines to carry export produce out.

Infometrics senior economist Brad Olsen says this could be the reason behind a drop in goods exports during the first quarter of this year.

Vespucci Maritime chief executive Lars Jensen whose firm is well-known for its work analysing trends and data in the container-shipping industry, says the global shortage of empty containers is coming up against the much larger problem of port congestion.

“There is a range of bottlenecks in the supply chain influencing each other. Not only is there a shortage of containers but the sailing schedules of the vessels are completely disrupted – much worse than ever seen before,” Jensen says.

Edwards says the Customs Brokers and Freight Forwarders federation’s data puts this figure at 14 per cent.

Jensen says 10 per cent of the world’s shipping capacity has been taken out due to port congestion issues.

Shipping lines are dealing with these congestion issues by loading fewer containers onto their ships.

“The fewer containers you load, the quicker you can handle the ship,” Jensen says.

CNA CGM has told its customers they will now need to get their containers to Northport or the Ports of Tauranga, or face penalty fees for holding onto containers for too long.

This applies to containers shipped through Australia which were originally destined to be unloaded in Auckland but redirected to Tauranga.

To put this fee in context, before the pandemic $1000 was roughly the price of sending a container across the ocean from New Zealand to Asia.

Which means importers are on the hook for significant costs either way.

Either they pay extra freight costs to get containers to Northport, or the Port of Tauranga, or they pay hefty “detention charges” for holding onto them for too long.

Edwards says it is unfair to say people who imported these goods are liable for the extra cost of transporting it to a different port.

He argues it is the responsibility of shipping companies like CNA CGM to make sure they have enough space to store the containers where they originally agreed to take them, or to compensate importers and others if a container ends up having to be shipped out from a different port.

All of this comes on top of a steadily building set of shipping woes: a Covid-19 outbreak in Southern China is seriously hampering global shipping, shipping schedule reliability is the worst it has ever been, fewer ships are visiting, while technology companies are stocking up on basics like power adapters fearing future shortages to come.

​Edwards says moves to get people to take their empty shipping containers to Northport are a sign the port is now a “semi-permanent” option for shipping lines thanks to congestion at Ports of Auckland.

“Ports of Auckland coming right is not going to be this year, I’m sure of that, it may be next year perhaps.

“So until that happens [CMA CGM] will say ‘hey look we can’t come to Auckland and be anchored for days therefore Northport’s our option’.”

​Edwards says he has taken cases to the disputes tribunal on behalf of clients and notes others are considering further legal action against the shipping lines.

“You don’t want to be doing legal action against a shipping line. We have to sort of work together right? We’re all part of the same supply chain.

International shipping lines are reacting in wildly diverging ways to the situation.

The shipping industry profits are soaring globally after a decade of bankruptcies and mergers driven by low profitability and overcapacity.

Edwards says some lines place a good deal of value on their long-term contracts. They realise demand can turn quickly and are sticking with long-term clients in the hope this will be reciprocated when things change.

Other shipping lines are seeing it as just deserts for importers and exporters who have had it too good for too long.

“There are some shipping lines who are seeing this period of time, where rates are at unbelievable historic highs, as revenge for the many years when importers and exporters had rates so cheap.

“That’s a personal opinion, but that’s what I’ve felt speaking to some of the shipping lines.

“The feedback’s almost ‘well you guys had it so good for 10 years, now it’s our turn’.”