BOP man fought 40 years to get folic acid in bread 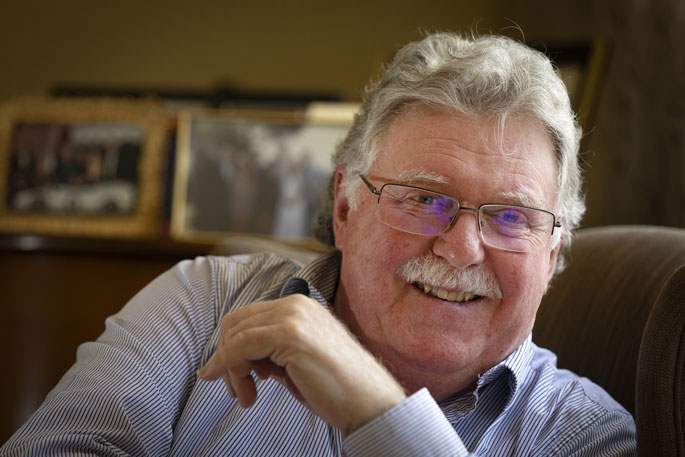 In 1983, when Simon Thurston was born, doctors told Lyall Thurston and his wife Gabrielle that Simon would likely only live for 24 hours.

Simon had spina bifida, a condition which affects about one in every 1000 pregnancies in Aotearoa.

Simon is now a successful professional with a tertiary education – Lyall even boasts of how Simon even completed a third major almost by accident.

“They called him in one day and said, do you realise you’re one paper off a triple major?”

Lyall’s not just a proud dad. He was celebrated by his colleagues at a Lakes District Health Board on Friday morning for his 40-year role in advocating for folic acid to be put into bread-making flour to help prevent neural tube birth defects such as spina bifida.

It follows a Government announcement on July 8 that fortification of non-organic bread-making wheat flour would begin from mid to late 2023.

The policy is expected to prevent between 162 and 240 neural tube defects over 30 years, saving the country between $25 million and $47m in health, education and productivity costs over the same time.

The Government will hand over about $1.6m for flour millers to cover the cost to buy and install equipment for the task.

In the meeting fellow board member Johann Morreau says Thurston has been “New Zealand’s primary advocate” for the introduction of folic acid to bread, describing his work “tireless”.

“It’s absolutely huge to see this happen and it’s got massive implications.”

Another member, Rob Vigor-Brown, says he salutes Thurston, saying it's work “for the kids”.

Chairman Dr Jim Mather acknowledges Thurston’s leadership in the area, which he calls an “important issue for our tamariki and future generations”.

“He toka tū moana. You are the rock in tumultuous seas and tremendous storms, to be able to withstand all the challenges over the years.”

In his home in Rotorua’s south on Friday afternoon, Thurston is less focused on taking the credit for himself, instead soberly recalling the trials, tribulation, and sheer data trawling over 40 years of campaigning.

He says shortly after Simon was born, he began reading and discovered the discussion about a lack of folate in modern people of child-bearing age.

“That’s when I started pushing for it.”

He connects with epidemiologists such as Dr Godfery Oakley in the US and Professor Fiona Stanley in Australia – both leading advocates for folic acid fortification of flour to prevent conditions such as spina bifida.

Since then Oakley has become “part of the family”. He’d just got off the phone with Stanley, who was “absolutely blown away” at the news.

Thurston is still on message though: folic acid is a soluble vitamin B that is non-toxic and any excess in the body will be excreted.

It has significantly reduced brain, spine or spinal cord birth defects in the many other countries it has been implemented, such as the US, Canada and Australia.

Thurston, then described as “Mr Folate” graced the Rotorua Daily Post’s front page over the victory.

But it wasn’t to be. The National Government backed out of the decision following opposition from bakers and industry lobby groups.

“They were all about dismantling the ‘nanny state of Helen Clark’.”

Australia’s rate of neural tube defects dropped by 14 per cent overall and 74 per cent for the indigenous population.

Thurston says Oakley told him to “just keep going and never lose sight of the prize”.

“It was families like mine who kept pushing and knocking on doors.”

Particularly the doors of MPs, Thurston says, which he believes made the difference. There had been opposition from the Greens about choice and “pure food” he says, but that has changed.

“We got everybody on board.”

However, in that time, children had been “committed to wheelchairs” he says, and some children hadn’t survived – something he described as “unforgivable”.

He says those who opposed it had “blood on their hands”.

“It was a political decision [not] one based on science and research. The science has always been there.”

Thurston says after about 40 years of campaigning he had mixed emotions at hearing the news, but elation was one of them.

“What a gift the New Zealand Government has given to babies yet to be born.

“But there’s a sense of foreboding, we’ve been here before.”

He thinks the roll-out could come sooner, and he thinks the cost of implementation is inflated.

There is hope though, too – Thurston believes the public now understands the science.

“I think we’re there this time.”