Would you take a pay cut to have your dog at work? 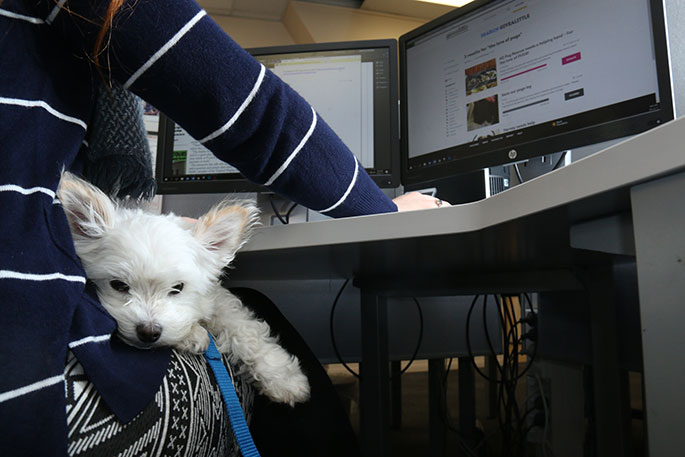 A new survey of nearly 800 Kiwis has unearthed startling news - just over half of those who are currently allowed to bring a dog to work wouldn’t move to a better job if it meant they could no longer do so.

Results from a recent Facebook survey by NZ pet insurance provider pd.co.nz highlights the benefits to both employees and businesses of dogs being permitted in the workplace.

Some respondents had dogs while others didn’t, but almost everyone believed there were benefits to a workplace allowing dogs in.

Eighty-nine per cent of all respondents considered being able to bring a dog to work as an employment perk and 90 per cent said they’d consider free pet insurance offered by an employer to be a job perk too. Eighty-one per cent believed employers should offer “pet parental leave such as bereavement and ‘pet-ernity’ leave”.

Almost all the 49 per cent of respondents whose workplace does allow dogs – domestic pets as well as assistance dogs – enjoy having them there.

Employers of the 51 per cent of respondents who aren’t allowed to bring a dog to work may be surprised to learn over three-quarters – 77 per cent - would be more loyal to them if they could BYO pooch. In fact, almost one third – 30 per cent - would be prepared to take a pay cut if it changed their employer’s mind.

Along with the many benefits noted, there were a few downsides to having dogs in a workplace environment – the main one cited as “accidents” on the carpet, followed by stolen lunches. In one case, sandwiches were devoured plastic wrap and all! However, employees generally saw the funny side and the guilty owners were quick to deal with their dogs’ mishaps.

Twenty-six per cent of everyone surveyed did feel having dogs in the office is/would be distracting, though not necessarily in a negative way. And as one pointed out, “No more distraction than making small talk with colleagues or taking unnecessary coffee breaks.”

Interestingly, 14 per cent of dogs who enter NZ workplaces actually undertake office ‘duties’ on those days. Responsibilities include:

The survey also uncovered interesting, funny and heart-warming stories. One respondent worked with a teenager with neurodiverse needs who was in a disability support learning class at school.

“On Wednesdays, his teachers would let me bring my dog to school so he could bring her into his class and the kids could pat her,” says the respondent. “They loved her so much and it was incredible how kids opened up to her. One of the students barely ever spoke, and over the course of a few months of patting Juno every week, he was holding full-sentence conversations with me once a week. The power of dog!”

And if ever there was a reason for allowing dogs at work, it’s this one  - a respondent often spotted a big German Shepherd in a small car in the work carpark and wondered why it was alone all day, apart from being walked at lunchtime.

“I asked around and was told he was a retired police dog who suffered from severe separation anxiety and couldn’t be left alone at home, but couldn’t join his dad in the office as he wasn’t a service dog,” says the respondent. “Apparently, the car kept him calm, but I felt so sorry for him and thought it would have been great for both dad and doggo if he had been allowed in the office.”

For further information on the survey, please visit https://pd.co.nz

No I wouldn’t take a pay cut to have a dog at work but I would have to leave my job if that became policy. Can’t think of anything worse.