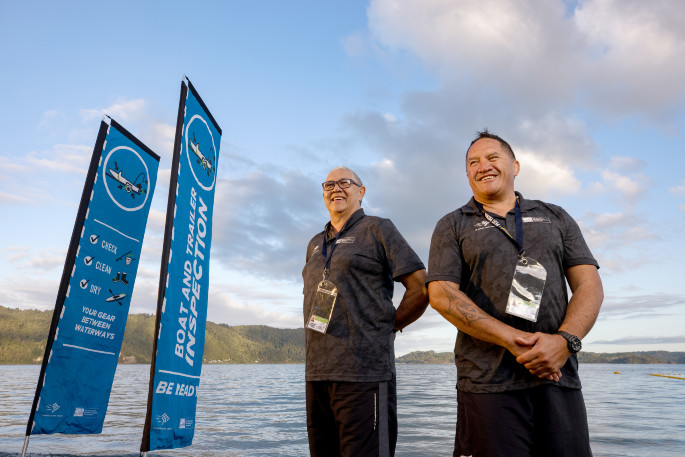 Last week, Toi Moana Bay of Plenty Regional Council extended its contract with TALT, which will also see an increase in the number of hunga tiaki undertaking the mahi.

The Trust’s Biosecurity Officers will now monitor the lakes’ boat ramps year round rather than just during the peak summer months.

“Rotorua’s Te Arawa lakes are a taonga for everyone to enjoy and their protection from invasive aquatic pests is critical to ensure they can be protected and used for generations to come,” says TALT Biosecurity Manager, William Anaru.

“Our extended contract with the Regional Council will see five new hunga tiaki trained and warranted, bringing the total number to seventeen Te Arawa Biosecurity Officers. This invaluable team will help to prevent the spread of aquatic pests, the water quality of our lakes is treasured, and lake users from far and wide are aware of the steps they need to take.”

William says New Zealand’s COVID-19 response had a significant impact on the Rotorua economy, particularly in the tourism sector, which has traditionally been a high employer of Māori jobs.

“With the borders still closed, many of these jobs literally disappeared overnight, so it’s exciting to see whānau now employed in this vital role – and developing a new career through environmental mahi at the same time.

“We [locals and manuhiri] all need to be accountable for our actions and need to work collectively to help stop the spread of invasive species. The team works to ensure both locals and manuhiri are aware of what’s required of them before they head out on the water.”

“Contracting the Trust year round to educate lake users on how they can prevent aquatic pests from spreading and ensure increased compliance of boat ramp self-certification across the Rotorua Te Arawa lakes is something that we can all celebrate,” says Greg.

‘We look forward to this summer’s 98 per cent success rates of clean boat inspections being replicated and to be accompanied by consistently high compliance rates of the new self-certification rules.”

Rules introduced in December 2020 as part of the new Bay of Plenty Regional Pest Management plan state that vessels and trailers must be free from freshwater pest fish and plants, no ballast water is transported between locations and that trailers aren’t left in the water other than for launching or retrieval.

Self-certification checkpoints were set up in January 2021 at popular boat ramps around Rotorua, with it being clearly signposted that the certification forms should be completed and displayed on the dashboard of the vehicle used to launch the vessel.

More information about the responsibility of lake users is available here.