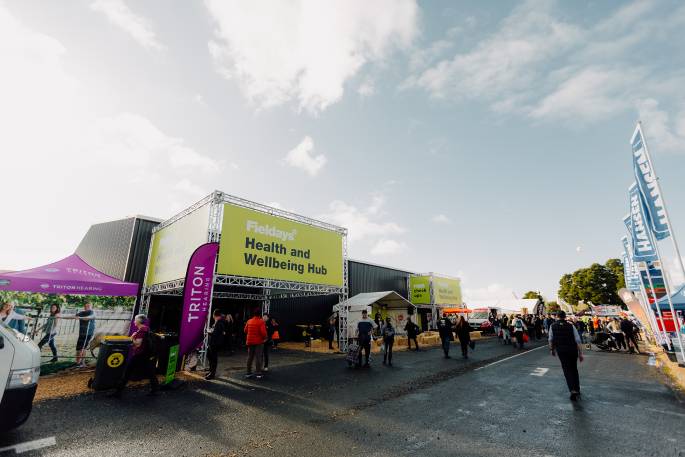 This year’s Fieldays Health and Wellbeing Hub brought in 8000 more people that the last time it ran in 2019. Image, Supplied.

More than 33,000 people came through the Fieldays Health and Wellbeing Hub this year, bringing in 8000 more people than in 2019.

The number shows an incredible feat and an encouraging step forward for improving health and wellbeing outcomes in rural communities.

The Fieldays Health and Wellbeing Hub is testament to the benefits that occur when people feel empowered to get their physical and mental health checked.

More so, it shows that taking the step to get checked could literally save their life.

The Hub gives visitors a whole lot more than a 15-minute consult with their local GP, which can be a mission for those who live in rural areas.

Mark says that this year there was a resounding energy in the place.

“Streams of people came through, doing the rounds among all the healthcare providers, getting support, having meaningful conversations, and telling their own personal stories.

“People were even waiting in line to get check-ups and tests, which shows that people are becoming more proactive about their health.”

The Te Manawa Taki community hepatitis C team exhibited in the Hub for the first time this year.

Their mission was to spread the word about hepatitis C to Fieldays eventgoers and provide a testing and treatment service in their “one-stop-shop” clinic.

Hep C is a blood-borne virus that causes inflammation in the liver and can lead to liver cancer if left untreated. One per cent of Kiwis are expected to have hep C, and only half know that they have it.

Jo says engaging with Fieldays visitors was an encouraging step towards this goal, as they completed 364 tests and 617 mini education sessions during the event.

“We had two nurses offering point-of-care tests, blood tests, and liver scans, so we could give people the chance to fit in everything into one visit, without having to follow up elsewhere.

“One incredible moment was when a young woman approached us saying she had hep C, and we were able support her straight away to receive treatment to be cured in under nine weeks. She was absolutely stoked.”

“Take some time out this month to see if you could be at risk, and if so, get tested, and encourage your family and friends to do the same.”

New Zealand also has the highest rates of melanoma in the world.

Though, if melanomas are treated early enough, they are almost always curable.

Melanoma New Zealand's mission at Fieldays was to spread the word about sun safety, melanoma prevention, and early detection.

Melanoma New Zealand Chief Executive Andrea Newland says there were large crowds of people wanting to chat about melanoma and get checked.

“With multiple nurses working both on and off our spot check van to meet demands at Fieldays, we were able to do 673 spot checks and found 54 suspicious lesions, including melanomas, which have been referred for further evaluation.

“Each visitor to the van and to our stand was also provided valuable education, empowering them to know how to be sun smart and what to look for when checking their skin.”

The team also conducted a survey at Fieldays which revealed that 61 per cent of people had never had a full body skin check before, and 82 per cent of those surveyed said they would book one after their visit.

Andrea says a highlight of this year’s event was when a woman sought out the Melanoma New Zealand team to thank them for providing her husband with a spot check at Fieldays a few years back. As a result, he went on to have a melanoma diagnosis confirmed and successful treatment.

“It was a nice full circle moment, and really shows that people taking the initiative to get their spots checked early can be lifesaving.”

Diabetes was also a hot topic in the Health and Wellbeing Hub this year.

Diabetes NZ had conversations with around 1,400 people about the risks of type 2 diabetes, some of which had specifically visited their stand because they were concerned they were at risk.

Their main message surrounded foot care, encouraging people to check their feet daily, as abnormal symptoms such as changes in foot colour and toenails could be early warning signs of diabetes.

The Waikato DHB Diabetes clinical team was conveniently situated across from Diabetes NZ, testing blood glucose levels, and completing more than 1200 tests during the event.

Normal blood glucose levels range between 4 – 7 millimoles per litre (mmol/l), and the team referred people with results over 7.8 mmol/l to their GP.

The highest blood glucose level recorded at Fieldays was 23 mmol/l, a level which could lead to hyperglycaemia in diabetics, which can cause life threatening health complications.

Mobile Health’s top priority in the Health and Wellbeing Hub was ensuring the team of health and wellness providers were looked after.

“There was no stress getting in, and people could just chill. We’d do a warmup and stretches, and brief people about what’s happening that day, and what’s working and what’s not.

“Fuakava, a medical student from the University of Auckland who was working for us, made sure everyone was taking breaks. We had the coffee machine running all day and lunches were provided.

“You’ve got to practice what you preach,” says Andrew.

For more meaningful discussions on the health and wellbeing of rural communities, check out the Fieldays presents Health & Wellbeing talks on demand at www.fieldaysonline.co.nz