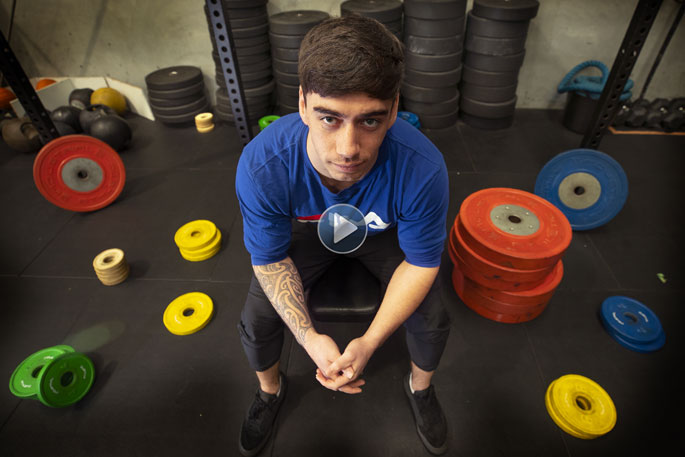 Xavier Albert is heading to the NZ Masters Championships in October for weightlifting. Photo: John Borren/SunLive.

A self-trained Bay of Plenty weightlifter is now heading to the NZ Championships after winning gold at the recent 2021 North Island Championships.

The championships brought togehter athletes from all over the North Island, with more 150 competitors taking part in the event in Fielding.

Xavier says the competition is the biggest he’s competed at so far.

“I first got into weightlifting as a hobby when I was in school,” he told SunLive this week.

“The very first time I picked up the bar was when I was 15. My close friend introduced it to me because he used it to get stronger for rugby.

“I didn’t start weightlifting properly until about three years ago.

“I pursued it because I loved it. I just enjoy training and being in the gym more than anything.”

Xavier went into the North Island Champs to set a mark of where he wanted to be at, and to make a statement to New Zealand Weight Lifting – to let them know he’s there.

“If I didn’t hit the numbers I wanted, then I would know what I needed to work on in the future,” says Xavier.

“I always get silver so it was pretty overwhelming that I got a gold.”

Xavier says during the whole competition his mind set was to not worry about the numbers.

“I was in a phase where if I hit a good number then it wouldn’t matter to me because I had more numbers to hit.

“Because it’s such an individual sport, you have to worry about your own numbers, and you can’t really think about others.

“My whole focus was just on me, and if anything, I just love the atmosphere of the competition,” he says.

Although weightlifting is an individual sport, Xavier says other athletes and competitors all supported each other throughout.

“When we were all warming up, Cam Urgert, who got second, was right next to me saying things like ‘you got this and put on a show.’

“He’s one of the best lifters in New Zealand and is also an NZ representative, so all credit to him and also Jordan Robert who got third.”

For Xavier, his competing days have been quite different to many others around the country.

The 23-year-old hasn’t had a coach throughout his competing years but he has had people guide him at times.

“It’s quite rare to not have a coach, but when you’re out on the platform you’re your own coach anyway.

“It’s an individual sport and you have to coach yourself.

“I stay motivated through the love of the sport and the curiosity of it. ‘How do I get that number or how do I do that better?’”