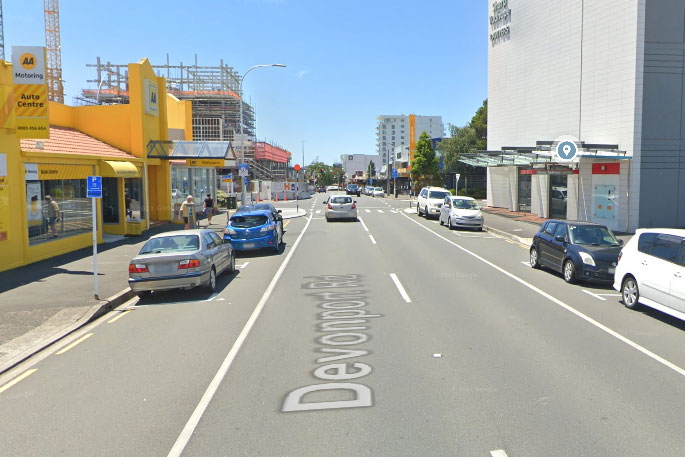 A section of Devonport Road will be closed for two weeks. Image: Google Maps.

A section of Devonport Road will be closed for two weeks, starting on Monday.

The closure will be from Elizabeth Street and 2nd Ave, says a statement from Tauranga City Council.

“The road will be closed to enable the construction of two raised pedestrian crossings on the north and south sides of the Devonport Road and First Avenue intersection.

“The two raised pedestrian crossings are intended to slow the speed of cars as they enter the city and create safer crossing points for pedestrians.”

During the closure, southbound vehicles will be diverted from Devonport Road, through Elizabeth Street, Cameron Road and 2nd Ave.

Northbound vehicles travelling along Devonport are best to reroute from Devonport Road down either Eleventh or Ninth Avenue along Cameron Road and back down Elizabeth Street.

Council says access to and from 1st Ave during this closure will only be via Cameron Road.

“During this time, right turns from 1st Ave and 2nd Ave will also be prevented to ensure safe driving while diversions are in place. See map below. 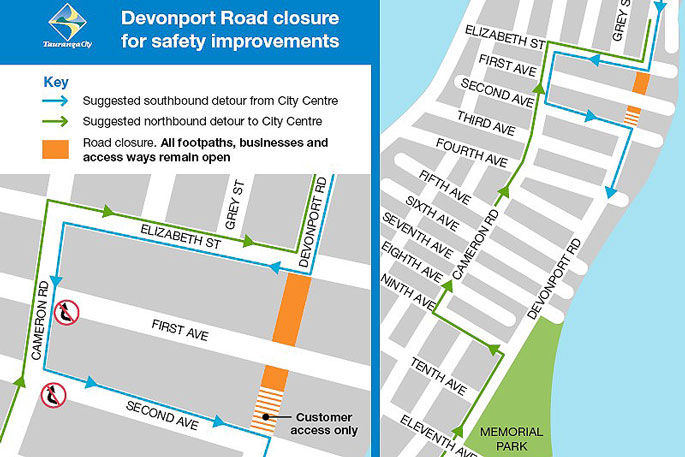 Works to upgrade water and wastewater pipes are underway on Elizabeth Street between The Strand and Cameron Road and are due for completion in mid-July.

Streetscape works have commenced on Elizabeth Street, between Devonport Road and Grey Street, in front of Smiths Sports Shoes and Event Cinemas, says a council spokesperson.

“Streetscape works include a raised pedestrian crossing which will be the main entrance into the Farmers store due to open by Christmas. Businesses and footpaths are accessible during works.

“Traffic lanes remain open during the day, with some road closures at night between 8.30pm and 6am.”

Bus routes servicing Grey Street have been rerouted down Durham Street. A bus stop is serviced outside 146 Durham Street to temporarily replace the bus stop outside 96 Grey Street. Signage for bus users is in place and latest service updates can be found at www.baybus.co.nz

In August, Elizabeth Street will become one lane to enable the construction of a green public space outside the Farmers development.

The lane between Elizabeth Street and 1st Ave

Works to lower the electrical cable and repave the 1st Ave end of the laneway are underway.

The 1st Ave end of the lane will be closed to pedestrians until mid-August.

Pedestrian access to the Elizabeth Street car park building and the public toilets will remain open, says the council.

Works to construct a raised pedestrian crossing midway down 1st Ave (between the council car park building and Alimento) are underway.

The road on 1st Ave will remain open.

2 Devonport Road: please take care when walking past the demolition site in this area. There will be footpath detours and some car park closures over the next few months.

@R1Squid Do you, do the stop, look ,listen? Look left then, look right thingy we were supposed to be taught at year1 of school? If you did, I don’t think that would have happened to you. (Close calls)

You have all confirmed that motorists don’t actually see pedestrians. I have had so many near misses while using the pedestrian crossing that is already in place at 1st Ave and Devonport Road.

I think a lot of people could safely predict that the eventual outcome will result in a major and costly redesign of the roading as even now the streets are clogged with slow moving vehicles. None of the roads in the inner city have any capacity whatsoever to handle the amount of extra traffic which will result from opening both the business arm and then the subsequently opening residential part of this development. In addition, crossings placed on intersections have got to be the most effective way of further compounding the slow moving of traffic with an increased likelihood of drivers hitting pedestrians as they turn into the road, particularly if drivers are checking the opposite direction for cars heading their way. This all amounts to even more reasons to stay right out of the inner city. Watch it happen.

Could not have put it better!!!

Avman, Thinker, Accountable and The Sage - are right on the point - two weeks for two pedestrian crossings in the school holidays !!!! The CBD is not dead yet !! but the Council bureaucrats and Commissioners are doing their best to totally kill it and the streets around it !!!

... thinking that some TCC staff are sitting round looking for things to justify their existence? Where can we put a crossing? What about some traffic lights? Then, when the process to implement the plan has been started, NOBODY steps back and says: "Hang on a minute, best wait ’til after school holidays..." Time and again, there has been a lack of thinking projects through (say no more about bins and car parks...), evaluating side effects, or implementing checks and balances so that consultants are checked by independent peers or competent in-house managers (which didn’t happen in a certain housing development recently...). Assigning a competent Project Manager, who makes sure that all these things are done and is ultimately responsible, should be a fundamental. We KEEP seeing half-baked amateurish projects that just demonstrate the lack of leadership and overall Management Competence in TCC that we are currently suffering from.

who the hell employs these idiots in council, they have not got a brain among the lot, god help our beautiful city

Currently the no1 bus route into the city id along Devonport Rd with a turn into Elizabeth St, then Durham St. There is a popular bus stop outside the AA. On the buses I use, there is always some passengers getting off or on at that stop. I have sent emails asking what is happening, to no avail.

I’m more enthralled with months of cones at Maleme street Cameron road corner. Speed restriction no one took any notice of as work seemed incredibly haphazard. And the achievement ? To remove a turn left into Maleme street which seemed practical anyway to now an expanse of brown concrete?! and revamped footpath. A lot of work to achieve very little except disruption for months and no filter lane into Maleme. Marvelous. No wonder we have little confidence in road planning. Announced probably year ago to reduce speed on Pyes Pa road but no action? Do the petition to do so was two years ago, mustn’t hurry thesez things huh

How about just painting some black and white stripes and teach pedestrians how to use them, and how to cross the road safely.....look left, then right.......check for traffic....keep looking left then right. Not crossing from behind parked vehicles. It use to be taught years ago.

Council planning at its best

Right over the school holidays. What else can they do to thump businesses in the CBD?

With Thinker but maybe, just maybe, we would have seen some pedestrians during the school holidays that start today but because the main thoroughfare into the CBD will be closed for the next two weeks it will be very unlikely if we see anyone! What a dumb time to close a main road into a struggling CBD. Once again Council is proving they have extremely inept staff who couldn’t organise a booze up in a brewery!

Two weeks to build 2 little pedestrian crossings? Both of those should be able to be installed in one night. But still, since the whole purpose of the crossings is to stuff-up traffic then I suppose the ridiculous extra construction diversions are just part of the plan.